Yes, that’s right, a robot really did make my roti. But before you start picturing R2-D2 flipping rotis on a griddle faster than I can roll them, or WALL-E zipping around the kitchen covered in flour, let me rein your imagination. A bit. This robot looks more like a snappy little white box with orange trim and windows through which you can glimpse some roti-making action. And no, it doesn’t walk around or make robot arms, but it is super efficient, makes delicious and nutritious whole-wheat rotis, and is saving me a ton of time in the kitchen. 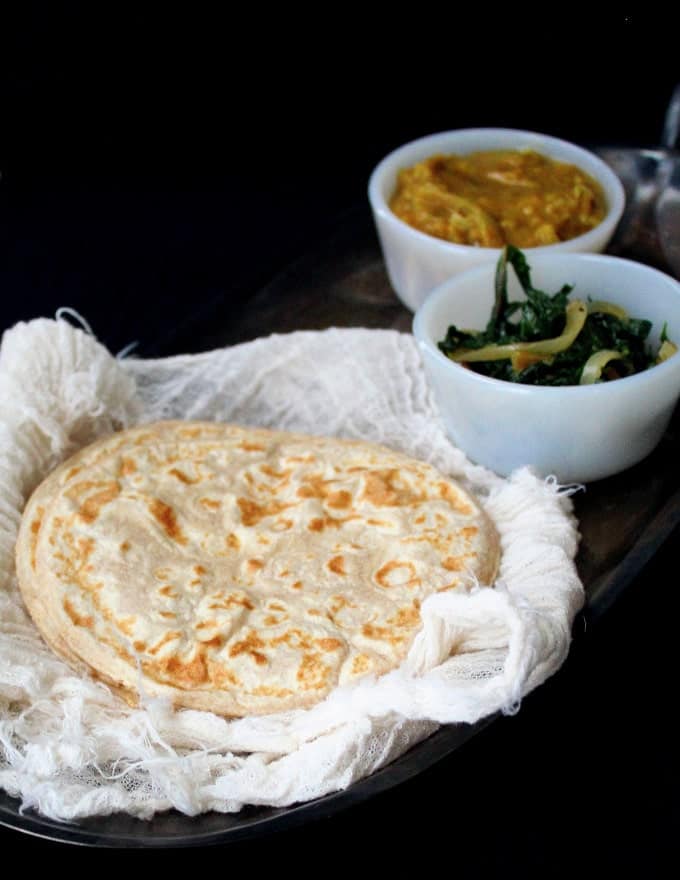 Besides, it’s just so much fun to watch a robot cook! Jay can’t quite get over it. For that matter, neither can I. 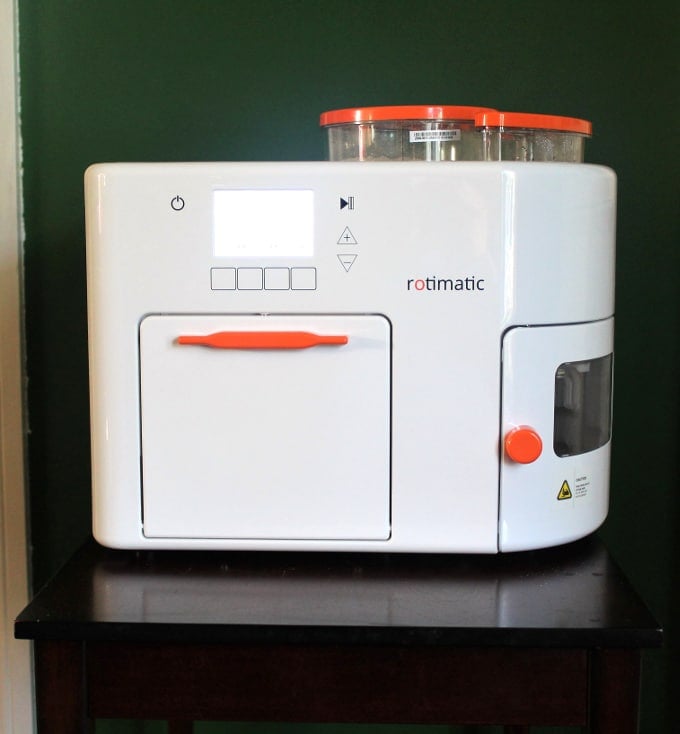 The Rotimatic is the world’s first robot for making rotis, a food that’s eaten in most Indian homes every day, and it recently made its debut in the U.S. market, targeting the large Indian diaspora here, but also anyone who loves a roti — or a tortilla or a whole-wheat wrap because a roti is essentially all of those.

You’ve likely eaten a roti at a restaurant at least, but the version made in homes is baked in a griddle, not a tandoor oven, and — unlike the restaurant version which usually uses refined flours — the homemade kind is made with whole wheat.

Roti-making is an integral part of cooking in any Indian home. Every morning my mom would start the day by kneading chapati or roti dough in a wide, high-walled, hammered-steel plate called a paraat. I would watch wide-eyed as she made a well in a small mountain of flour and poured the water in, working her way in it with her fingers, until the dough came together, magically, off the sides of the paraat and her fingers and into a smooth ball. Sometimes, she’d let me roll it into even-sized balls that she would roll into perfectly round rotis and bake on a griddle.

Fast-forward to my kitchen where the roti-making process used to be a last-minute thing, if I had the time to spare after getting home from work, and pulling together a quick dinner so my eight-year-old wouldn’t starve. I would mix up the dough in my food processor or my stand mixer (more washing!), then roll the rotis out and bake them on a griddle. It wasn’t a difficult process, by any means, but it was a little messy, not to mention time-consuming.

Now, all I do is touch a button — in fact, a kid could do it, if you could trust a kid around an appliance that costs $999, that is. All you need to do is load the flour, water and oil in the containers that pop into the Rotimatic, and tell it exactly how many rotis you’d like to eat. As my rotis rolled into the little tray, I felt rather Back-to-the-Future-like. Remember the hydrator scene where Lea Thompson pops a teeny packaged pizza into a microwave-like gadget and it morphs into a large, fresh one? Well, this is kinda like that, but better.

You can customize your rotis for four levels of thickness, the amount of oil, and the roast level. Using an intricate network of motors, sensors, and 1,000 other parts, all controlled by a microprocessor, the Rotimatic takes care of the entire roti-making process for me. It pulls in the flour, water and oil from the containers, kneads them together to make a ball, rolls the dough, and then bakes it into a perfectly round, fluffy bread. You can actually watch some of the process through a window.

Even the cleanup is easy as pie– all you need to do is brush some of the working parts clean, and wash the containers and the kneading mechanism occasionally. 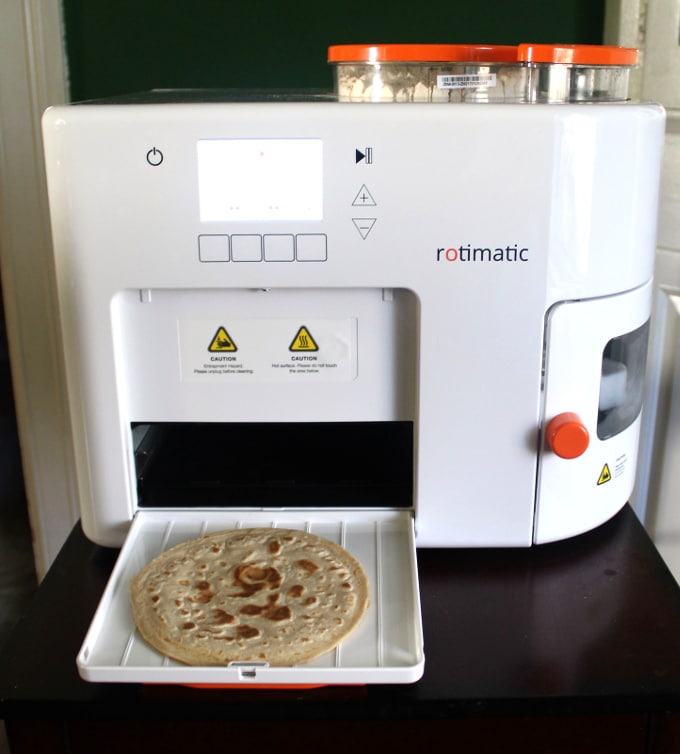 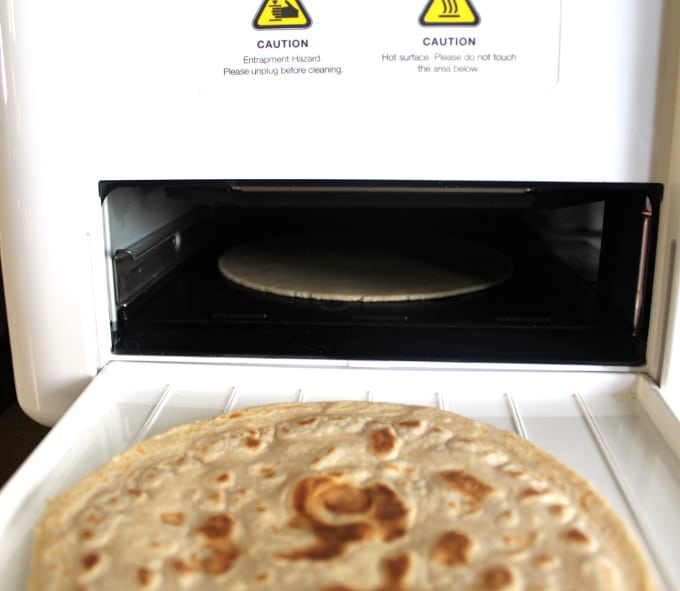 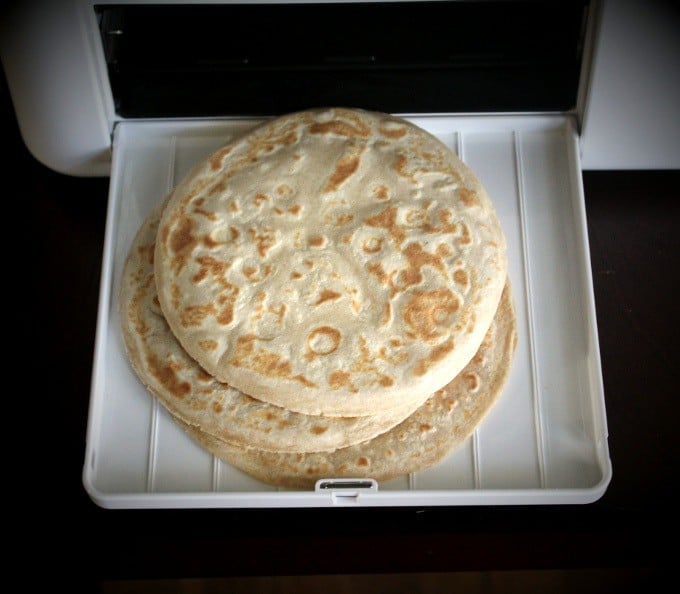 I have gotten so used to my Rotimatic in the last few weeks since the makers sent me this unit for review, I haven’t touched my rolling pin and griddle. I’m a bit spoiled, honestly. The Rotimatic does take a few minutes to warm up — about six minutes — after which it starts to spew out rotis at the rate of about a roti per minute. It works perfectly for me because I can start it up and while it makes rotis, I can reheat any leftovers or make a quick sabzi and dal.

I have to admit that when I first heard about the Rotimatic, I was a little sceptical. I make pretty good rotis, and I didn’t think a machine would be able to do as good a job. But I have been pleasantly surprised. I love how evenly shaped the rotis are, and although they feel a bit stiff when they come out, wrap them in a kitchen towel for a few seconds and they soften right up.

The rotis are about six inches in diameter. You could pick up rotis at a local health food store if you’d rather not make them — the Whole Foods in my area stocks them — but the great thing about the Rotimatic is that you are completely in control of the ingredients, so you’re not adding to it any preservatives or anything other that what mom did when she kneaded and roasted them by hand. The Rotimatic even lets you choose how much oil to add. There is, however, no oil-free option: something I would have loved, and I hope they introduce that feature at some point.

And that brings me to what is one of the coolest features of this robot: the Rotimatic is wi-fi enabled, so you can connect it right up to your mobile phone and sync it up so your machine gets all of the latest updates. I’ve never had a kitchen appliance that did that! 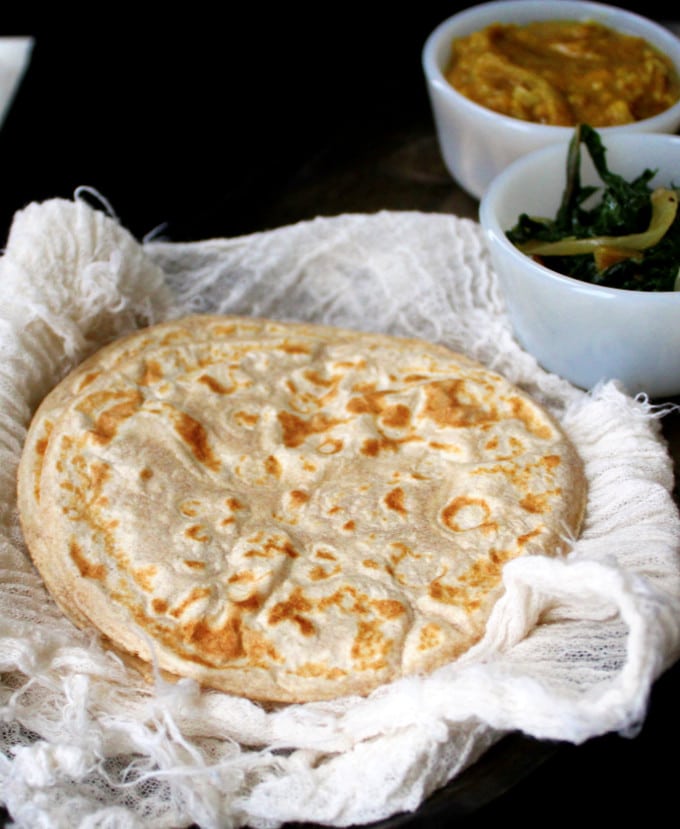 I also love their support feature, that you can access on your phone. I ran up against a small glitch while setting up my Rotimatic, and I got help in minutes to guide me through the process.

The Rotimatic is preprogrammed to work best with certain brands of atta or durum wheat flour, which is typically used to make rotis. I don’t get most of those brands here at my Indian grocery store and I was a little confused about what to do, but then I simply used the durum whole wheat flour I had, and the rotis turned out fine.

The Rotimatic is rather pricey, but if you are super-busy, or just don’t want to go to the trouble of making rotis from scratch every day, it is a buy well worth the money. Reading reviews online, I found many wives celebrating how their husbands didn’t mind it when they go to India on long holidays now because they have a roti-making robot at home. Desi would get a nasty shock if he ever equated me with a machine, however good-looking and futuristic, but you get the idea just how life-changing this can be? 😉