A blogger friend left me a message saying she wanted to go vegan but doesn't think taking milk from a cow is cruel because there's no bloodshed.

I understand her hesitation: many of us believe in the "California cow" myth-- you know, the one perpetrated by those cutesy ads where dairy cows gossip, graze on idyllic green pastures all day and lie lazily in the sun. The one where, we are led to presume, they will willingly offer their udders to some smiling milkmaid and her soft, gentle hands.

But the reality looks more like this. Dairy farms are usually places where hundreds of cows are packed into muddy lots where they stand in their own feces most of the time, or in small stalls so tight they can barely move. They certainly don't see any green pastures or even the blue sky. Their tails are docked (amputated) without any painkillers -- is that something you can even imagine? They are then injected with astronomical amounts of hormones to make them yield unrealistically high quantities of milk. Some cows get so heavy because of all this hormone-pumping that their legs break under their weight. The excessive milking causes their udders to become painful and swollen and often infected.

For those who believe dairy cows are just fine because they don't have to die to give milk, consider this: the average life span of a cow is around 14 years but most dairy cows are slaughtered for their meat around four years of age which is roughly when their worn-out bodies stop producing milk. They are crammed into open trailers and driven hundreds of miles to the slaughterhouses, packed in so tight that they can't sit or rest during this, their final journey. Many collapse from heat exhaustion and are just left there to die. Those who survive will die in a day or two anyway. And here's how that happens: when it's time, they will be prodded with forklifts, sprayed in their nostrils with water and dragged with chains to get them into a box where their heads will be lopped off and their bodies carved into meat for steaks, burgers, roasts and whatnot.

What's worse, the veal industry -- which slaughters little calves for their meat-- is a direct offshoot of the dairy industry. Cows lactate only when they are pregnant, so to give milk, dairy cows have to be kept in a constant cycle of pregnancy. The female calves they give birth to are retained to replace their moms as dairy cows, but the male calves are separated from their moms within hours of birth and spend the next three or four months confined to crates and tethered by their necks. And then they are killed for their meat.

I'm not pulling all this out of my you-know-what-- these are cold, hard facts revealed during investigations by animal advocacy groups.

And if all that's not enough, here's something more. You know how we've been told that milk is vital for growing strong bones. Well, studies by researchers at Yale and Harvard have shown conclusively that people who consume most of their calcium from dairy products break bones twice as easily as those who get their calcium from leafy greens and other calcium-rich vegetable sources. Countries like Japan and China, where people consume very little milk, if at all, have the lowest rates of osteoporosis in the world. On the other hand countries like India and the United States, which consume lots of dairy, have the world's highest rates of osteoporosis. Coincidence? I think not.

Carrots, tofu, leafy greens like kale and spinach, beans, grains, broccoli, seeds and nuts are all rich sources of calcium that's much more easily absorbed by the human body than the calcium in milk. Plus, they taste better.

Here's the bottomline: dairy products are completely unnecessary, even when they come from "humanely" raised cows because, honestly, who ever decided that humans should drink the milk meant for calves? Come to think of it, it's quite a yucky thing to do. Besides, we are the only animals who poach upon the milk of another animal, so shame on us!

And why should we do it, when there are dozens of great, healthier options like soy milk, rice milk, almond milk and hemp milk, vegan cheeses that taste like the real thing, tofu that does a great job of emulating dairy in baked goods, and soy yogurts that make you go mmm.

Finally, to prove that you can eat deliciously sans dairy, here are my Almond Bars with a Citrusy Glaze which I veganized from a recipe in the King Arthur Flour Cookie Companion. These bars have a crumbly shortbready crust made with heart-healthy canola oil instead of butter, a chewy, toffee-like almond center that's intoxicatingly sweet, and a lime glaze that will make your tastebuds tingle. And although they look and taste terribly elegant, they couldn't be easier to make. 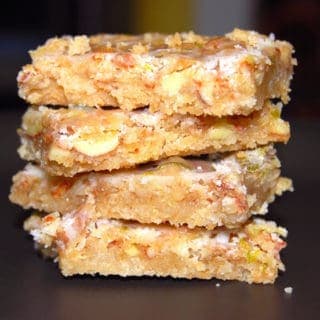 For the bottom crust

For the citrus glaze