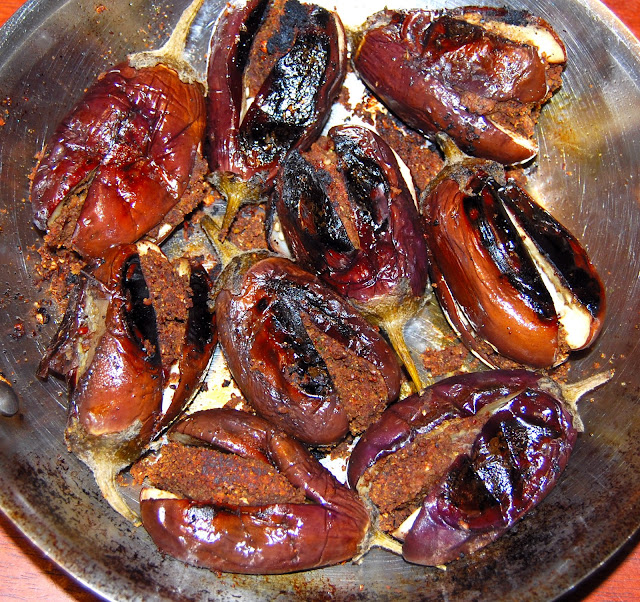 India is point zero for vegetarianism. More than 30 percent of the country's billion-plus residents shun meat -- in fact most people in this group have never, ever eaten a creature that once breathed-- and this is perhaps the only place on earth where you can find as many exclusively vegetarian restaurants as non-vegetarian ones.

Which might make it appear odd that I often get this SOS from vegan readers: I'm going to India and I am worried I won't be able to eat anything. Do you have any tips?

To another vegan, that question makes perfect sense. Because vegetarian India is also incorrigibly milk-happy.

India's religion-based circle of compassion fails to embrace one of the most horribly abused animals in the food industry: the cow. And most Indians unfortunately turn a blind eye to the fact that the gentle animal they tout as holy gets pumped with hormones, is tethered all day in garbage-filled barns with hundreds of other cows, is denied veterinary care even when she is sick enough to be dying, and is given filthy water to drink. Most cows and buffaloes used for milk stand in their own feces all day and workers trying to manipulate them hit them with sticks and pull them by their tails. All this so people can have their fill of ghee (clarified butter), butter, yogurt, paneer and cheese, all significant components of the average Indian diet.

Vegans visiting India-- and a growing number of vegans in India-- very understandably want no part of this. But there's no reason to despair either: while it is true that dairy is heavily consumed in India, the belief that it is impossible to eat vegan in the country is not just far-fetched, it's a complete myth.

Here are some tips on traveling vegan in India:

--Eat more at South Indian restaurants like Udupi eateries, those incredibly delicious and low-priced outlets that you can find anywhere in the country these days and where you can always find vegan food. Steer away from sweets (although some like the gorgeous jalebi can be vegan) and from foods that specifically say they contain yogurt (and a waiter can guide you on this). At North Indian restaurants, stay away from foods with words like "dahi" and "paneer" in them. If you eat at Indian restaurants in the U.S. or anywhere else in the world, you probably already have a good idea of how that works.

-- Explain what you want-- or don't want-- to the waiter or, if possible, to the chef. Ask for an explanation of what is in a dish if you can't tell by the name. And be patient if people don't get you rightaway. Indians won't quiz you on why you don't eat meat because many of us don't, and they won't pester you with arguments about how meat tastes better because they know, thanks to their rich vegetarian tradition, that it doesn't. But they will absolutely, positively not understand why you won't eat milk products, which are the considered the food of the gods and the wealthy.

--Eating at cheap restaurants may be a bonus because they will not typically use ghee or other milk products which are expensive. But you might be able to make yourself better understood to the waiter and get your specific preferences more easily at an upscale restaurant that caters to tourists. Also, here's one thing you don't have to worry about: Indian vegetarian dishes almost never contain meat stocks-- again thanks to the large vegetarian community here.

-- Research eating choices at the places you are visiting. India may be known for its lacto-vegetarianism, but it is also home to a fast-growing community of compassionate vegans. Indian cities like Bombay,  Bangalore and Delhi have large and friendly vegan communities eager to help, and you can and should reach out to them for advice. Vegan India! has an extensive resources page, and Happy Cow has helpful lists of restaurants that are vegan-friendly.

--Learn local words for milk products and meat so you can make yourself better understood. India is gloriously multilingual and while you might not be able to learn how to say "curd" in 22 languages, you can get by in most places with a smattering of Hindi and English. Here are some Hindi and Tamil translations for words you might find useful:

Cream: Malai (Hindi). Not sure what the Tamil word for this is, but if anyone knows, please volunteer.

-- When buying foods off the shelves, read the labels. Many Indian foods now do list ingredients, and they usually do so in English. If you plan to do your own cooking, tofu is widely available and so are soymilk and margarine/butter substitutes. You won't easily find meat substitutes other than TVP, usually called soya granules or chunks, but that's only more opportunity for eating gloriously healthy grains, legumes, veggies and fruits (and trust me, you'll meet many you've never met before).

--Lastly, and I can't stress this enough, lighten up. Don't make a fuss if you happen to be served a sweet that contains regular sugar (often refined with bone char), or kick up a ruckus if you find your dal smells vaguely of ghee even after you specifically told the waiter you didn't want any. Part of being a conscious vegan is educating people about cruelty-free choices without making your lifestyle look ridiculously rigid and unattainable. Just move on and better luck next time.

And whatever you do, don't focus so microscopically on the food-- as wonderful as that is-- that you miss out on the vibrant, high-fidelity and technicolor experience that is India.
***
Today's recipe is one I snagged from everyone's favorite Indian chef on YouTube, the VahChef. I had a bag of cute, tender, tiny eggplants that I bought at the Indian grocery store over the weekend and I wanted to cook them up into something special. I usually use these to make Bharli Vangi, a super-delicious, sweet-spicy Maharashtrian dish where you stuff the eggplants with a mixture of coconut, spices, jaggery (an unrefined Indian sugar) and peanuts and then cook them to melt-in-the-mouth tenderness on a low flame.

The VahChef's also stuffs the eggplants but his recipe is from the state of Andhra Pradesh in South India and uses a different kind of stuffing that's spicier.

The recipe was really simple to follow and I made just one big change and a small one: instead of deep-frying the eggplants in the beginning, as he does, I oven-roasted them. And I cut down drastically on the number of chillies.

Here's the recipe. Enjoy the weekend, all! 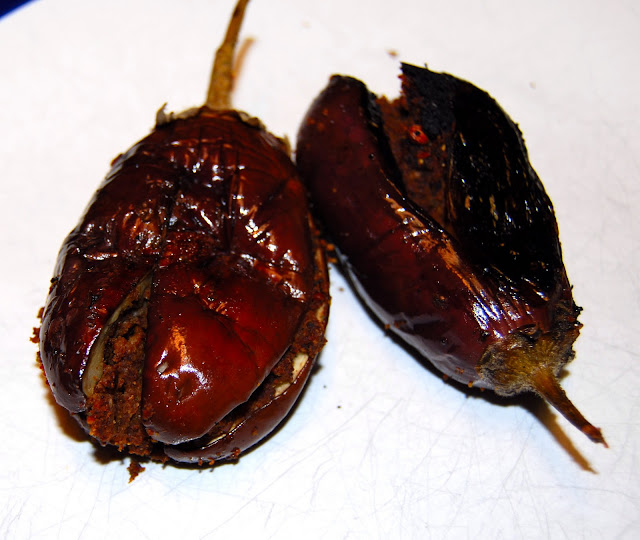 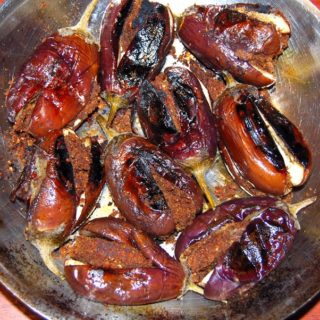 Andhra-Style Stuffed Eggplants, And Tips For Traveling Vegan In India

As aggravating as snow can sometimes be to jaded old me, Opie and Lucy never fail to show me just how delightful they think it is: 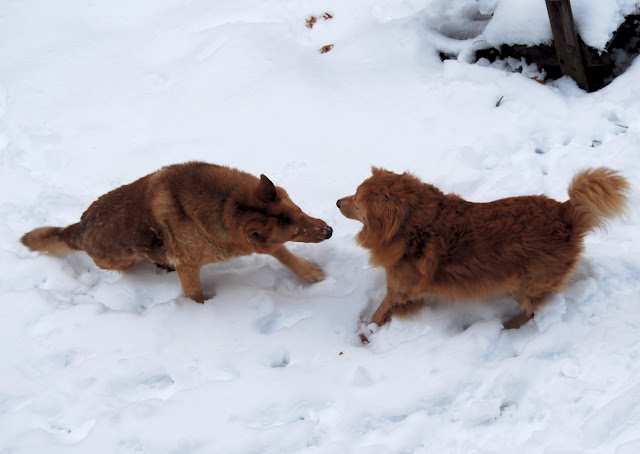 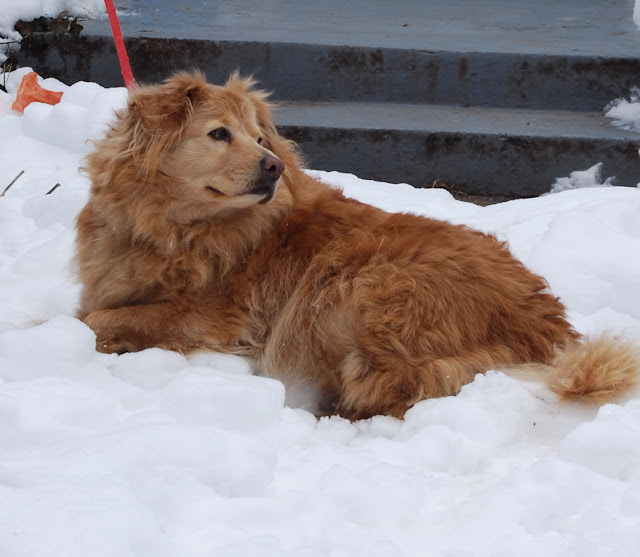 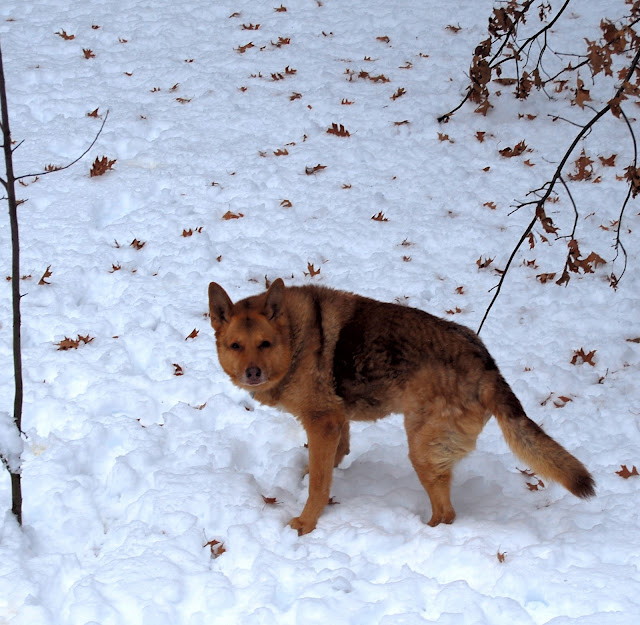 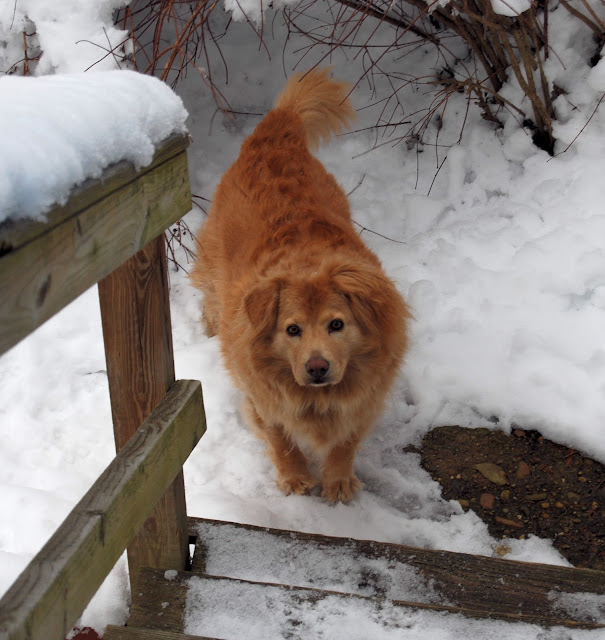