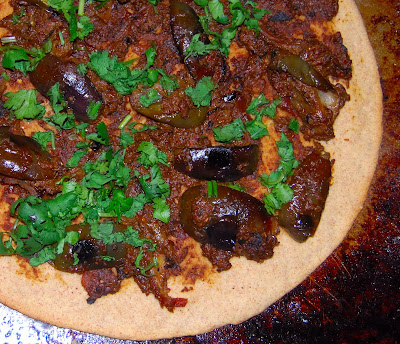 It’s time to announce the winner of last week’s giveaway. But first, let me tell you about my Baghare Baingan Naan-Pizza.

Yes, that’s what it is. And if that sounds odd, trust me, odd can be beautiful. And delicious.

The Baghare Baingan Naan-Pizza was inspired by Lavi’s unique event calling for pizzas topped with Indian flavors. I considered sending in my tandoori-tofu-topped pizza, but then I found these tiny, egg-like eggplants that I love at my Asian grocers’ and wham!…a brainwave.

Baghare Baingan is a spicy, mouthwatering dish from Hyderabad in southern India, and I had long ago posted a recipe. I decided to use the baingan as a topping for my pizza, and because I wanted the Indian flavors to run through, I chose to make a naan instead of a pizza.

A naan dough is not very unlike a pizza dough, and I have in the past substituted one for the other. This time, I went with my grilled naan recipe, but I substituted 1 cup of the all-purpose flour with whole-wheat flour, making my Indian pizza healthier. I also cut up the baingan into quarters, instead of leaving them whole as I did for my Baghare Baingan, so it would be easier to lay them out on the pizza.

I am not going to repost the individual recipes for the Baghare Baingan and Naan dough, since you can check them out for yourselves. But here’s the procedure I followed. Remember, only follow the instructions for making the naan dough and don’t go ahead and grill it, as you would when making a grilled naan. 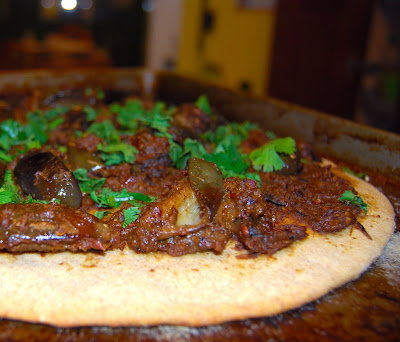 A handful of chopped coriander

To make the pizza dough, follow the grilled naan recipe. At the point where you divide the dough, divide it into two, not three pieces. Roll each piece into a ball and let stand for half an hour.

Roll out each ball into a 12-inch round. Poke the round with a fork, going all over the pizza. This will “dock” the pizza, so it doesn’t rise in the oven which would make it difficult for you to top it.

Place the naan-pizza in a 425-degree oven for 15 minutes or until it’s beginning to brown and just starting to stiffen up.

Spread the baghare baingan on top of the pizza as evenly as possible. Scatter some coriander leaves on top, then put the pizza back in the oven and bake another 15 minutes or until the bottom is lightly golden-brown.

Remove the pizza from the oven, scatter some more coriander leaves on top for a fresh burst of flavor, and cut into wedges. You might even want to squeeze a dash of lemon on top of the pizza. Yum.
**

And now for the moment that all of you—or at least 61 of you– have been waiting for. The winner of the $50 iHerb giveaway.

The winner was picked entirely at random — I put all your names on little paper slips, folded them up, and then had the very helpful Desi hold the bowl out to my very neutral judge, Opie. 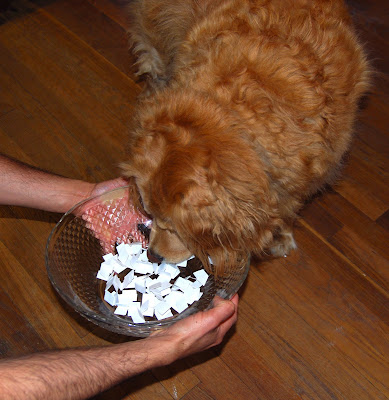 It took Opie less than a moment to decide. He grabbed a name and was running away to chew on it when Desi rescued it. So here it is, sticking to Desi’s fingers but still in one piece: 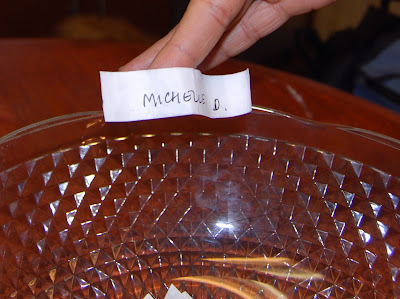 Congratulations Michelle D, and email me at [email protected] for details on how you can claim your gift.

As for the rest of you, I have something for you too. A code for $5 off for every first-time buyer at the iHerb Web site. Just enter the code BUY123 when prompted.