You are here: Home | Non-food posts | Be Well, Lucy 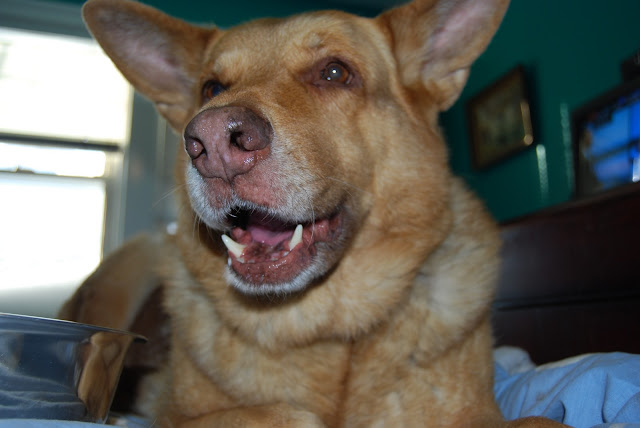 My girl Lucy is very sick.

She loves to chase squirrels and when we first noticed her limping a little last week, we put it down to a sprain. But the limp began to get worse and we rushed her to the ER.

It has to be a sprain, I said to Desi again and again on our drive over. We should never have given in to her demands to run around with Opie in the backyard. We should have forced her to rest, however much she hated it. She doesn't know any better-- we are the parents. How could we be so careless?

We did have deeper fears: Lucy's a German Shepherd, a breed prone to hip dysplasia, a displacement of the hip bones, and when she neared her eighth birthday last September the vet warned she could be at risk. We steeled ourselves to hear it was that, or arthritis. Devastating as that would be, we could deal with it: we've been living with Opie's arthritis and hip dysplasia for four years now.

We had no idea.

Looking at a picture of Lucy's leg bones on an X-ray screen Sunday morning, the vet gave her verdict: Osteosarcoma, a malignant bone cancer that has usually spread through the body before its symptoms show up. 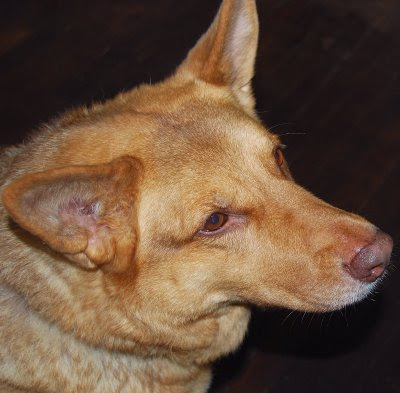 At best, she said, after her affected leg is amputated, Lucy might live up to a year, maybe two if we were lucky. "It is one of the worst cancers a dog can get," she said. "The prognosis is very poor."

Like all pet parents, Desi and I have always known that our kids won't live through our lifetimes. We don't think about it a lot, but we know it will happen and accept it.

But at eight, Lucy is too young. A child forever. Even in dog years, she is only middle aged. 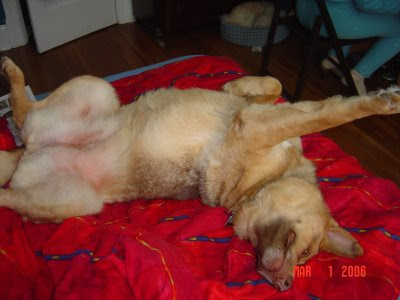 Were there signs? We've been wondering. Was she, somehow, trying to tell us that she was in pain and we missed it? Dogs don't show pain easily: a trait bred by instinct and experience of living in packs. Any sign of pain would be construed as weakness by other animals in the pack. We don't know how long she may have been hurting before she began to limp.

Lucy is our first-born. We call her that because she was our first rescue in the United States. She came from the Washington Humane Society, a one-year-old so smart, so silly, so gorgeous and so redheaded that we just had to name her Lucy after the wonderful sitcom star. 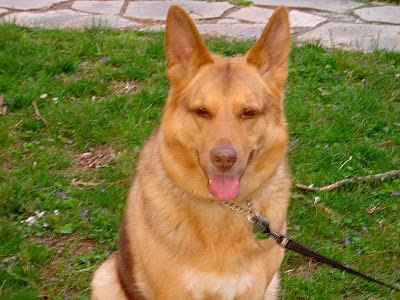 The first day we brought her home, a naive Desi -- who she immediately adopted as her favorite person -- put her new collar around her neck, a little too loose as it turned out, and took her for a walk. She easily pulled her head out of it to chase after Polo, the doberman next door, and disappeared into some woods nearby. But bright as she is, she found her way back by herself minutes later although she had spent only a few hours with us by that time.

Over the last two years I've shared many stories on this blog about Lucy. How the pressure cooker and thunderstorms send her flying for cover in the basement. How she has figured out ways to score treats without working for them. How she literally stops traffic in our neighborhood when we walk her, beautiful and elegant as she is. How she bosses over the other dogs at home and fiercely protects them around strange dogs. How she loves to go for long drives, hogging the entire backseat. How she offers up her stomach for a tummy rub to every person that comes into the house. 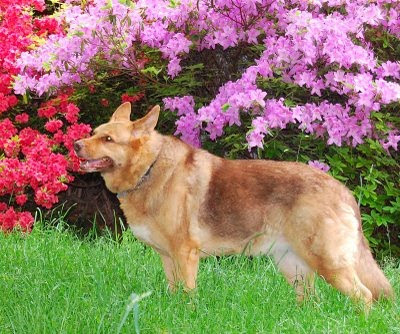 I could talk to you about her all day and all night. But right now all I can think of is making her better again.

There is a difficult road ahead of us, most of all for Lucy. Biopsy, amputation, chemotherapy, radiation are words that seem too harsh for our baby girl, but I've been reading up and apparently dogs do really well with three legs. And there are dogs who, with treatment, have even beaten osteosarcoma -- a small percentage, but they do exist.

The first time I saw Lucy, she was sitting in a run at the animal shelter, a skinny but beautiful creature. Unlike the other dogs, climbing up on the bars and barking to lick hands and kiss faces, she sat quiet, too dignified to demand attention from strangers. She barely acknowledged me when I offered her my hand. But both Desi and I could see that she was special.

When the shelter volunteer took her outside so we could meet her, the first thing she did was run all the way to the fence. Then she ran back and forth along it, a creature so majestic, it was hard not to fall in love with her. 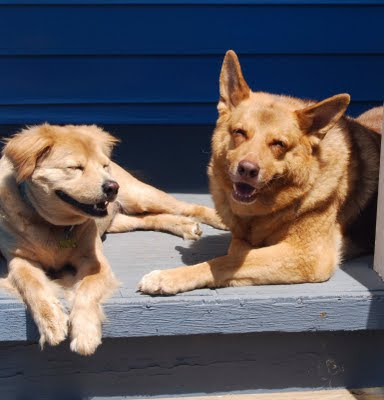 Running is what Lucy loves best. Except, perhaps, going on long drives and barking at every dog she sees out the window. Occasionally on weekends we'd take her out to the woods and she'd go to town chasing squirrels, bees and even the occasional bird (she's never actually caught anything in nearly eight years, but she doesn't think that's any reason to give up).

She can't run any more because the bone in her leg is so weak, it could fracture easily and not heal. She can barely walk. But veterinary medicine has advanced quite a bit and we have every hope our baby will heal and maybe even run again. And there is still a tiny hope that maybe the bone biopsy might reveal it is something else after all, not cancer.

Please keep her in your thoughts. 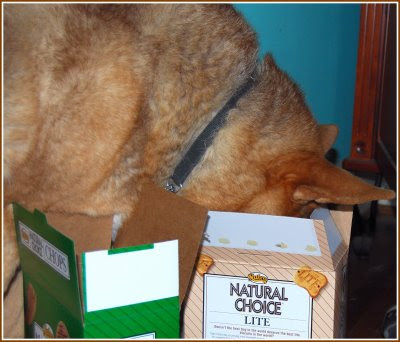