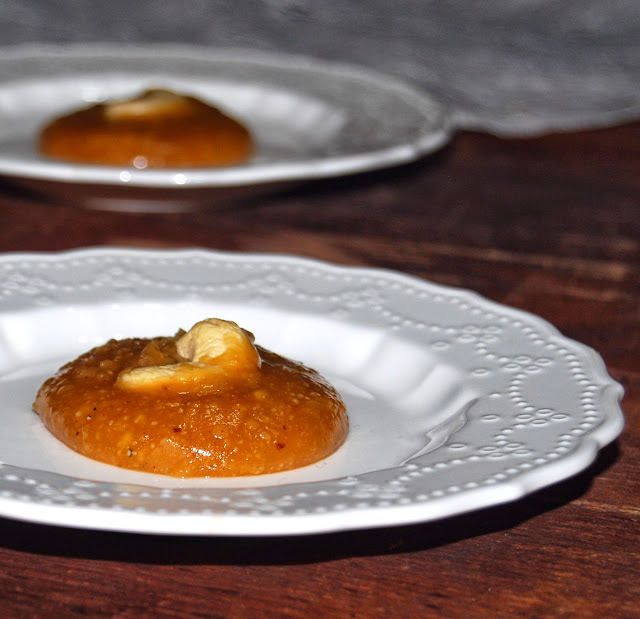 In India, right now, 'tis the season to be holy. Everyone's just winding down from a birthday bash for Ganesh the elephant-headed god, Dussehra's already at the doorstep, and Diwali will be here before you know it. All of this festival fever is accompanied by, quite naturally, a whole lot of food. A lot of it sweet.

It's more than a week now since I returned home to Washington but I am still in an India state of mind. All I want to do right now is go back and squabble with the rickshaw drivers in Chennai about the fares, stare upon a lush landscape in Savai Vere, Goa, and watch a movie with my arm tucked in Desi's at Regal Cinema in Bombay.

Unfortunately life makes it hard to have fun when you want to, and therefore all those plans will just have to wait. So what I have been doing instead is cooking up some favorite Indian foods. And because it is festival season back in my favorite place, some of it is-- you guessed it-- sweet. 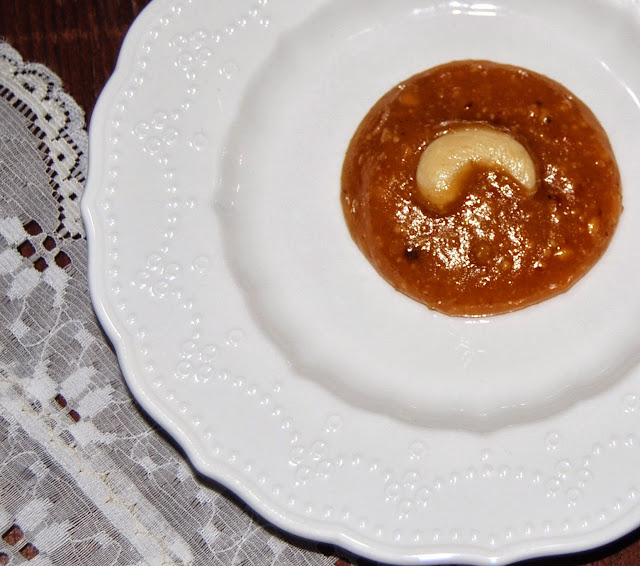 I came up with this very easy Besan Cashew Halwa because I was looking for a tastier alternative to a very popular Indian sweet that often pops up at Diwali but which Desi detests-- Besan Laddoo. For those who are not familiar with laddoos, picture them as spherical cookies that, like cookies, are available in a variety of flavors and textures. Apart from Besan Laddoos, made with garbanzo bean or chickpea flour, you have Rava Ladoo which is made with sooji farina, Til ke Laddoo made with sesame seeds, Coconut Laddoo, laddoos made with puffed rice (kurmura) and so on. I had an uncle who ate a laddoo made with a powder of fenugreek seeds (methi) and jaggery every day of his life. Fenugreek seeds are infused with lifesaving nutrients that fight diabetes, cholesterol, and all that bad stuff and Bhau Mama --one of the fittest people I ever knew-- firmly believed this laddoo, among other healthy habits, helped keep him fit. This year he celebrates his 100th birthday and seeing him again-- still healthy and fit -- was one of the highlights of my visit to India.

My Besan Cashew Halwa is perhaps not as healthy as a methi laddoo, although one could argue with merit that chickpea flour is good for you. I added the cashews because I wanted to soften the flavor of the besan which, although lovely to some of us, is not something Desi loves. The cashew powder also helps give a great flavor boost, making the absence of the ghee quite unnoticeable. I have some lovely cashew nuts that I just brought from Goa where this nut grows abundantly.

I wanted to share a few more pictures of my India trip with you all, so I've pasted them after the recipe. Thanks to all of you who enjoyed my travel posts. I could not leave you without a few more glimpses into some of the amazing places I traveled to and the even more amazing people I encountered.

But first, here's the recipe. 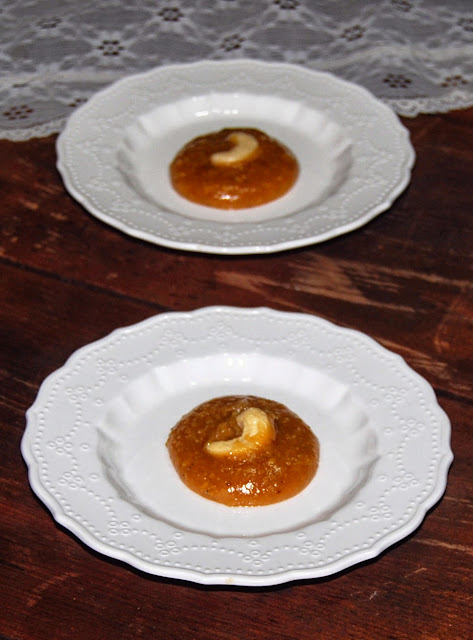 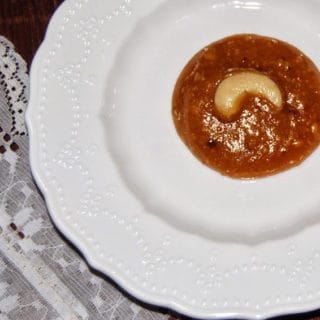 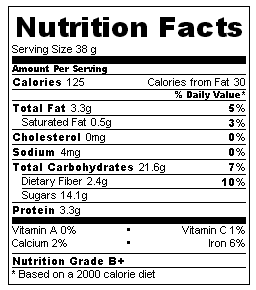 **
And now for the pictures: 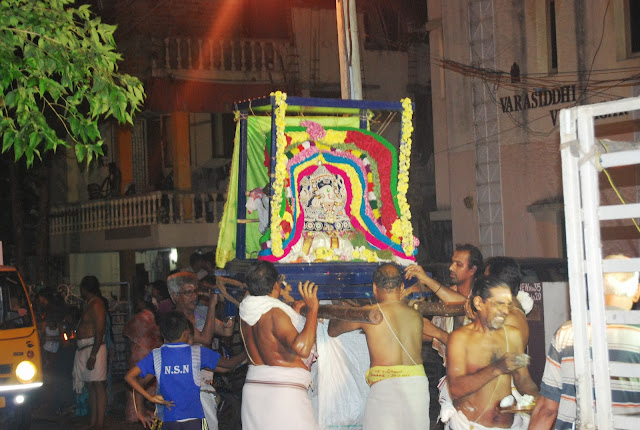 In Chennai, a Ganesh idol from a local temple is paraded through the neighborhood streets for Ganesh Chaturthi, the birthday of the elephant-headed god. A band of musicians accompanies the idol to announce its arrival. When they hear the music, women like the one pictured below, in the midst of cleaning up after dinner, drop their chores to rush out, oil lamps and flowers in hand, to worship the deity at their doorstep. 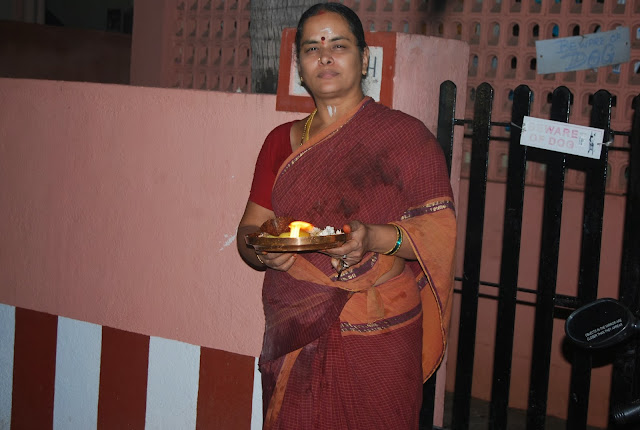 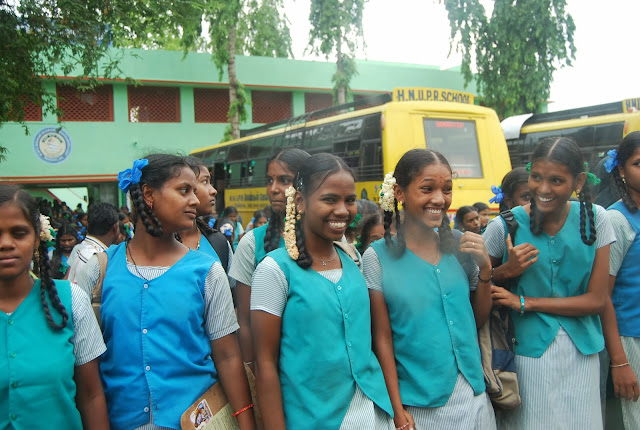 Girls wait to cross the road outside their school in a small town on the road from Madurai to Kodaikanal, a beautiful hill station in the south Indian state of Tamil Nadu. 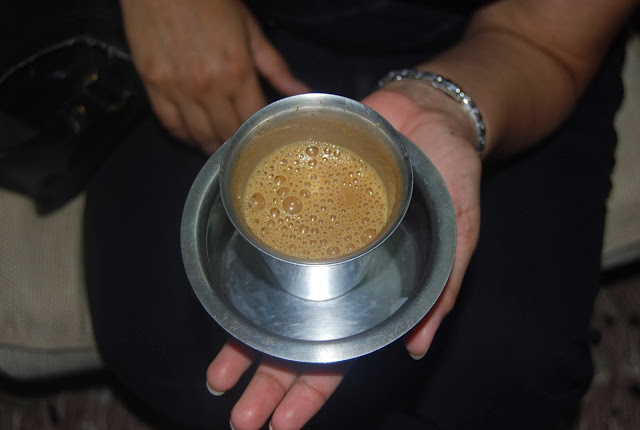 Tamilians are big coffee drinkers -- their coffee made in a special steel filter is one of the best you will ever taste--and here's their version of a cup and a saucer: a davra tumbler. 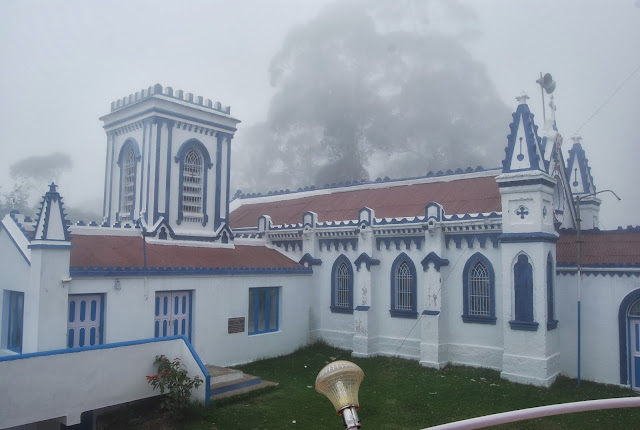 A beautiful old church covered by early-morning clouds in Kodaikanal. 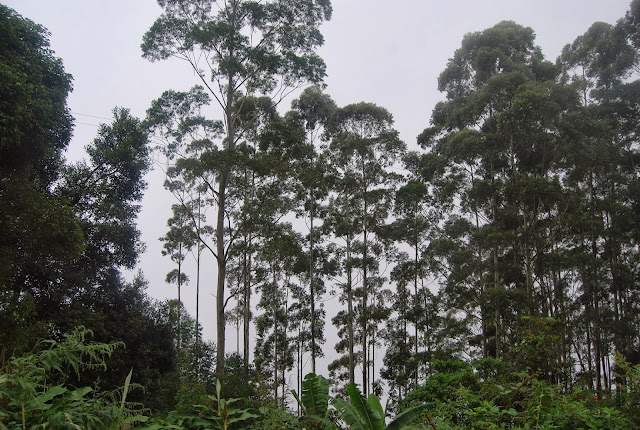 Giant eucalyptus trees march across the landscape in Kodaikanal. You can smell their fragrance everywhere. The gnarly roots of the trees create a natural stairway to help hikers navigate steep trails in the hill station. 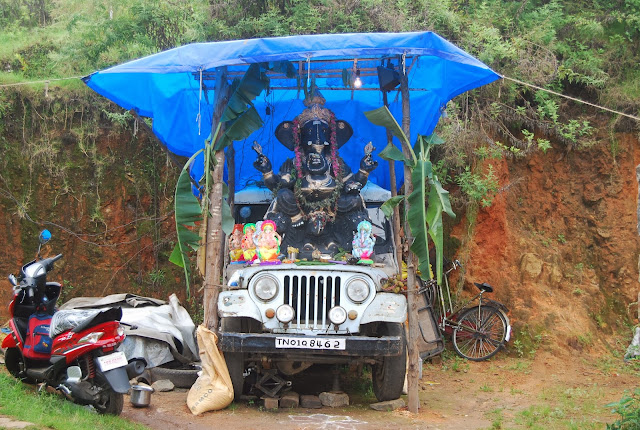 An unusual home for a community Ganesh idol in Kodaikanal. 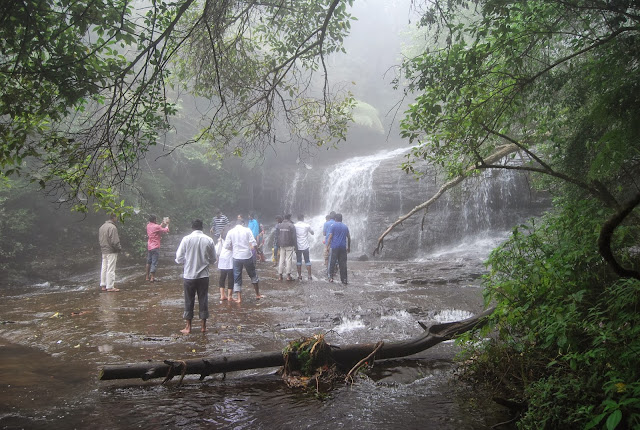 Visitors brave slippery stones to wade through a waterfall 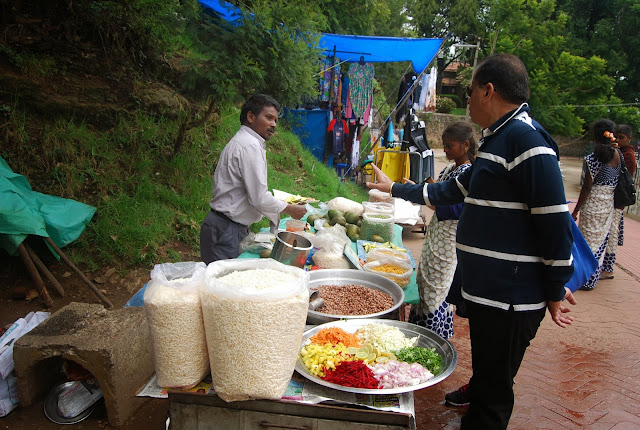 A bhel vendor mixes up a snack for his customers. 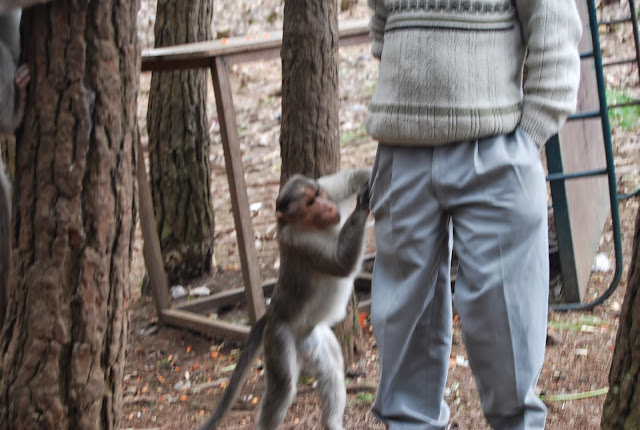 At a pine forest in Kodaikanal, a monkey digs through a man's pocket for candy. The monkeys are wild and free but they are used to food handouts from visitors and will approach people. Vendors sell crispy snacks and fresh carrots at the entrance to the forest and guess which food the monkeys prefer when they are given a choice? The junk food, of course. 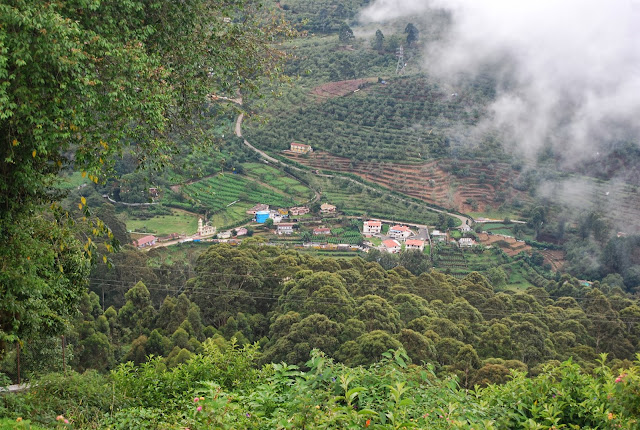 In beautiful Kodaikanal, the clouds roll beneath you, often covering up the landscape right when you want to have a look. But who's complaining? 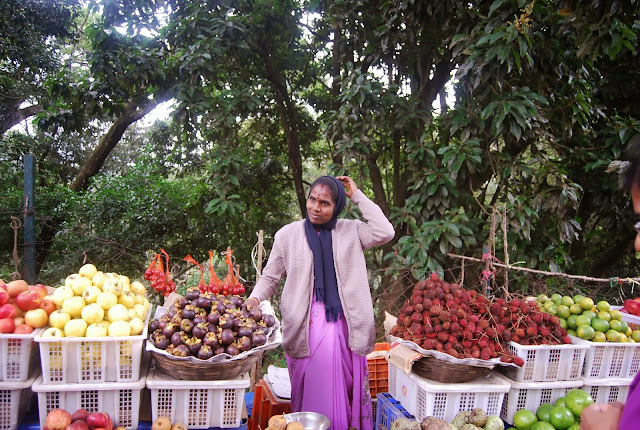 Because of its elevation, Kodaikanal's weather and vegetation is a world apart from the rest of sweltering Tamil Nadu. We encountered some rare and unusual fruits and vegetables here, including Chairfruit and Tree Tomatoes (below) which are eaten by making a slit at the top of the eggplant-like fruit and sucking out the flesh with your lips. 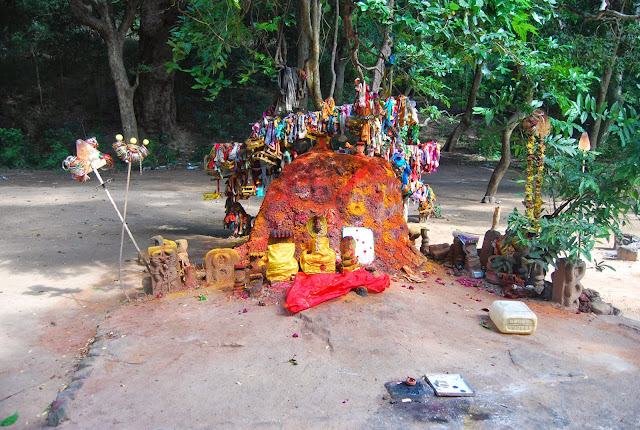 A snake pit (yes, really) outside a Madurai temple, covered with turmeric and vermilion and decorated with colorful pieces of fabric and tiny wood cradles -- offerings from couples hoping for a child. Snakes, like many living creatures, are worshiped as holy in India and Vishnu, the god who sits atop Hinduism's vast pantheon, can be found reclining on a huge cobra. 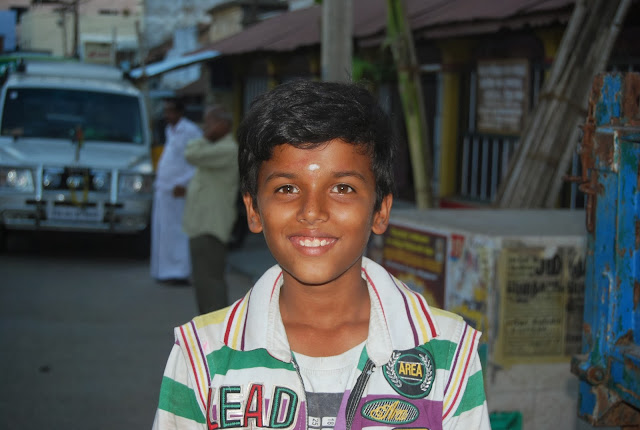 This cute boy outside the Meenakshi temple in Madurai begged Desi to take his picture and yelled "super!" after viewing it. He then walked away, happy as could be. 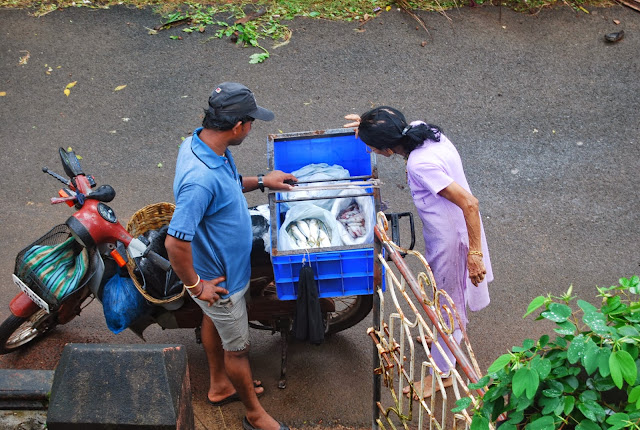 In Goa, vendors selling all sorts of foods make the rounds of neighborhoods all day. You never have to go to the market if you don't have a mind to because you can keep yourself well fed on fresh fruits, vegetables, bread and almost anything you would want. This vendor was selling fish -- the mainstay of every Goan diet-- and although we are vegan here at Holy Cow!, this is such a lovely picture that I couldn't help sharing. 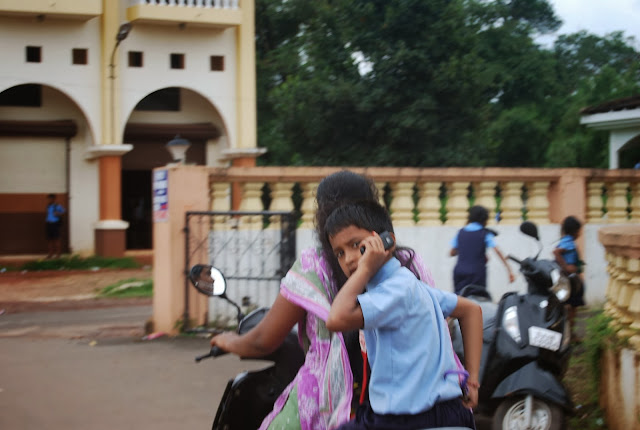 In Raia, Goa, children go home after school, including this boy on a cell phone who's getting a ride on a scooter driven by his mom. 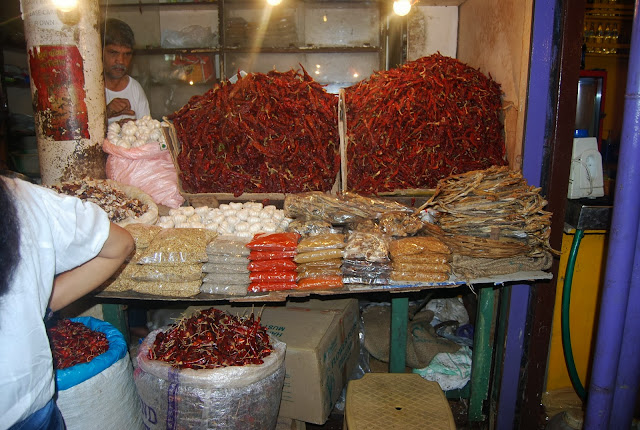 At the bustling market in Madgaon a vendor displays piles of fiery red chillies, garlic, tamarind and dry fish-- all staples for Goan curry. 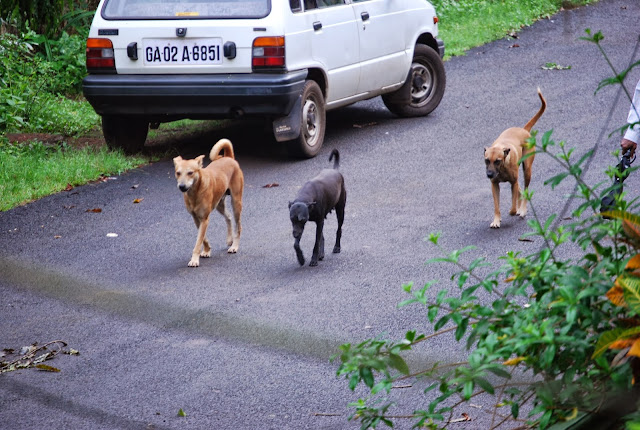 Stray dogs roam the streets of Goa, and most are friendly. Dogs who are skittish around people keep to themselves and don't bother anyone. India has made great progress with controlling stray animal populations and keeping them healthy without actually killing any animals. In Goa we came upon volunteers trapping dogs one morning. The volunteers take the dogs to clinics where they are spayed or neutered, eartipped-- meaning a corner of the ear is clipped to indicate the dog is neutered, a procedure used for feral cats here in the United States-- and then vaccinated for rabies before being returned to where they were picked up. Many people care for the dogs and feed them. 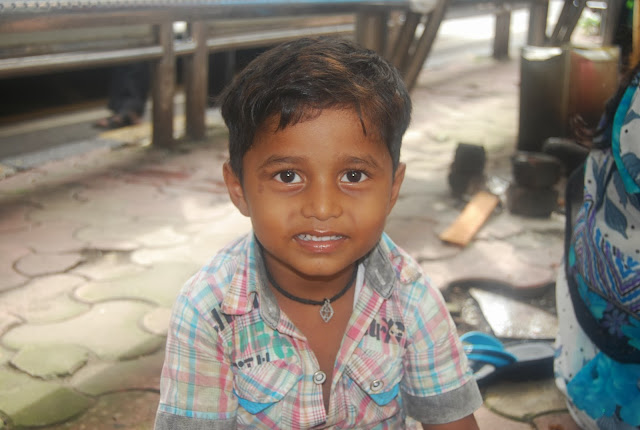 We saw this little boy sharing a meal with his family (below) on the sidewalks of south Bombay. You see the plastic sheet in the background-- that is the only shelter this family has, and yet there are smiles on their faces. Each day hundreds of immigrants from around India pour into Bombay, India's largest city and its commercial capital. They make their home on the city's streets and have no clue about what the future holds, but there is the hope that the megalopolis will provide a livelihood. 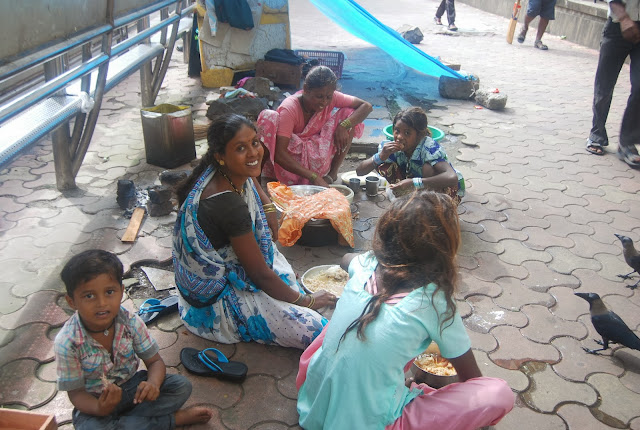 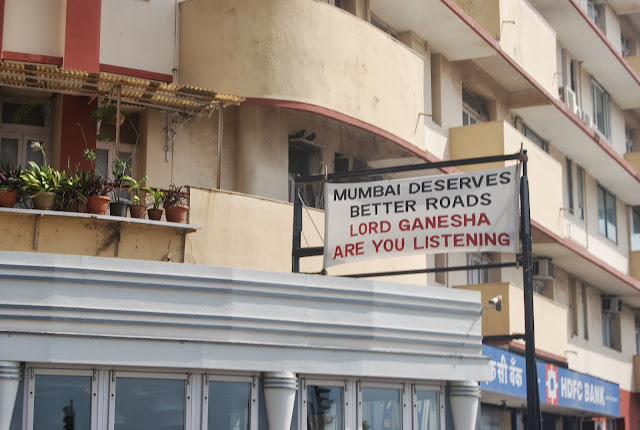 Mumbaikars, tired of the city's congested roads, make an appeal to a higher authority.