These gluten-free vegan waffles are nutty with buckwheat flour and crispy with brown rice flour. And they are easy as anything! Serve them with maple syrup for a perfect weekend breakfast.

My Saturdays start out with tons of plans but very little planning. All through the week I  keep in my head a running list of all the things I just have to do on that glorious day filled, at least from afar, with nothing but time. It's the day I will sleep late. The day I will call those friends I've been meaning to for weeks now. The day I will finally run that important but easy-to-put-off errand.

But come Saturday morning, it's quite a different story.

Well before the alarm can go off the cats start singing for their breakfast at the door and the dogs start licking our faces in hopes of getting us out of the house for a walk. Soon, unable to sleep with all this activity, either Desi or I gets up and gives in. And from there on the day pretty much spirals into a madly busy flurry of things that just have to get done, including a super-long walk for the irrepressible wag-tails.At the end of the day, though, it still feels like nothing really did get done.

In the midst of all this activity, I try my best to make breakfast a little more special than it usually is, although I just as easily give in to Desi's invitation of oatmeal.

This past weekend, I did find the time to cook up a recipe that had been floating in my head for a while now:  gluten-free vegan waffles that are richly nutty with buckwheat and crispy with brown rice flour.

Each time I make Whole Wheat Vegan Waffles I try to make them just a little different. But I realized I almost always include wheat flour, either whole-wheat flour or whole-wheat pastry flour. This time I substituted the wheat with buckwheat which really has no relation to wheat. It is a darker-colored, rich-tasting wholegrain flour that's a pretty popular addition to gluten-free pancakes and other desserts.

I also threw in some brown rice flour which I love because I knew it would make the waffles crispy. Some oat flour, which always adds a fresh, clean taste and lots of healthy goodness, also went in. The waffles turned out beautifully although they did take almost twice as long to get perfectly done in the waffle iron than my whole-wheat waffles usually take. We polished them off with some of the Apricot-Walnut Syrup left over from the previous Saturday's crepes.

Here's the recipe now for my vegan and gluten-free waffles. Enjoy, all! 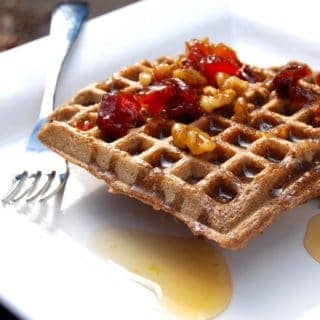