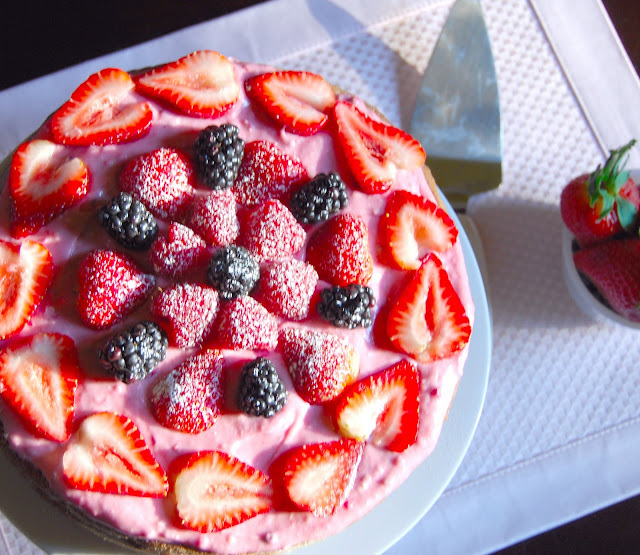 There's an unhappy relationship between cakes and my waistline but something about this Cocoa-berry Cake  made me want to toss the tape measure and start stuffing my face.

A few weeks back I got in the mail a review copy of Sweet Utopia by Sharon Valencik. It immediately grabbed my attention with its cover picture of a scrumptious-looking, three-layer cake with a thick layer of icing on top. Delving in, I fell in love with the fact that the author used almost none of those strange-sounding vegan baking ingredients that throw the non-vegans among us (and some vegans as well) into a confused daze.

The Cocoberry Cake looked particularly enticing: a two-layer cocoa-brown cake with a topping of berry-pink soy cream cheese, it sounded decadent enough but not without some healthy goodness mixed in. Since I had most of the ingredients needed in my pantry, and I had a chance to grab some deliciously fresh berries that morning on my trip to Whole Foods, there seemed to be no better way to spend my Sunday afternoon than to bake this cake and then eat it too. All the while watching reruns of I Love Lucy. 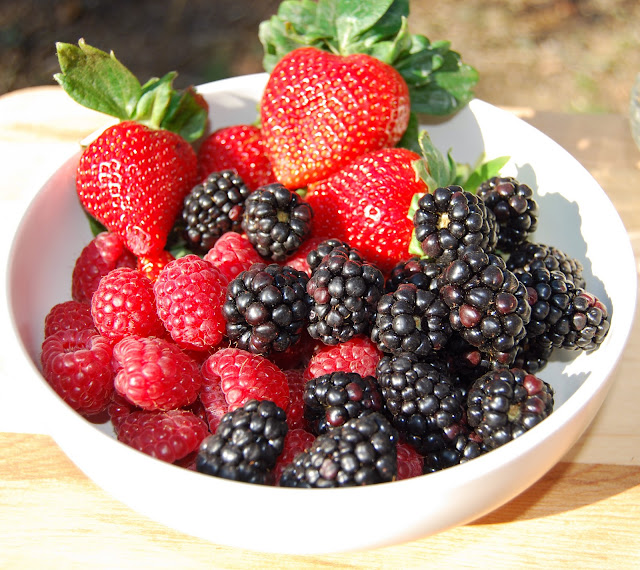 But no sooner had I started mixing things up than I realized that the proportions were, ahem, a bit off.

Normally I wouldn't change a thing when cooking for a review. But my half cup of berries, which were supposed to yield 3 tbsp of juice according to the writer, only yielded about 1 tbsp (and I swear my berries were darn juicy and I rubbed them through the sieve until my fingers were sore!). Then, when I was mixing up the batter, I had a couple of tense moments when everything went lumpy after I'd mixed the soymilk and vinegar into the vegan-butter-and-sugar mixture (this was not a problem, as it turned out, but I'd have appreciated a heads-up in the recipe instructions).

Finally, the batter, after I'd added the flour, turned out to be too thick, almost doughy. So I ended up adding another ½ cup of soymilk at the end to bring it to a more cake-batter consistency. But that also required me to mix the batter a few more seconds, which is not a great thing while making cake because you don't want to develop the gluten in the flour. Also, as I whipped up the icing, I got a feeling that it was not going to be enough to coat the sides of the cake, as the writer suggested.

The rest of the process went along fine and the cakes came out nicely baked and unmolded easily enough (I lined my cake pans with parchment paper). I iced the cake (although not the sides because as I'd expected the icing wasn't nearly enough), decorated it with a medley of berries, then sifted over it a soft snowstorm of confectioners' sugar. I sat back and admired it while Desi photographed it in the late afternoon sunlight. And then we sat down to eat.

The cake was delicious, but I am not sure that the 3 tbsp of cocoa in the recipe (hence cocoa-berry) helps it: in fact, it might have been better without, because the cake tasted neither chocolatey nor delicately white. The icing, with the pureed, crushed berries mixed in, was perfect.

Will I cook again from this cookbook? Absolutely. Who wouldn't want to make divine-sounding treats like Minty Green Tea Stars, Strawberry Fields Cake with Unbeetable Buttercream Frosting, and Chocolate-Pecan Paradise Pie? There are also some beautiful pictures accompanying the recipes-- wonderful to ogle at even when one's not actually in a mood to bake.

Here's the recipe for the Cocoa-berry Cake. Enjoy! 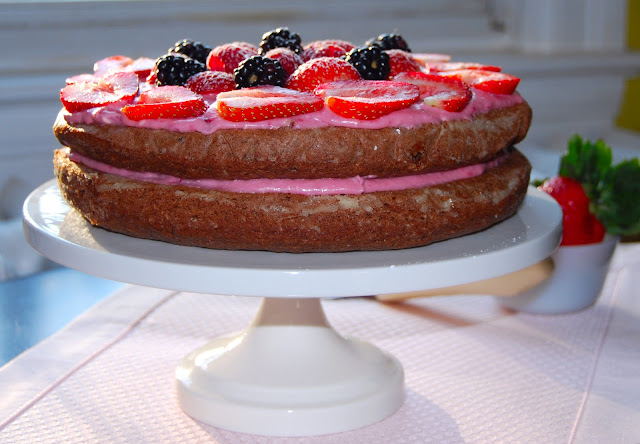 ½ cup of berries (one kind or mixed. I used raspberries and blackberries)

1 ½ cups soymilk (Valencik's recipe calls for 1 cup minus 2 tbsp but that proportion, for me, made for a doughy rather than cakey batter) 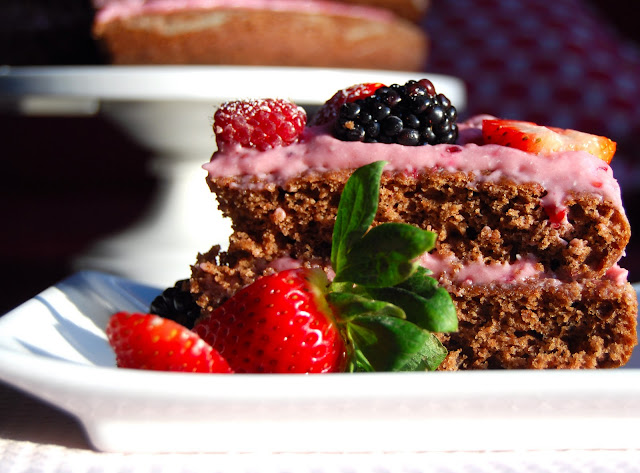 For the Berry Cream Frosting:

Press the berries through a fine strainer or sieve to extract the juice. This is supposed to yield 3 tbsp of juice but I got only about 1 tbsp from my berries. Set the juice aside and reserve the crushed fruit to add to the frosting.

Combine the flour, cocoa, baking powder and baking soda in a bowl and stir together until there are no lumps.

In a separate bowl, beat the butter substitute and sugar with a wooden spoon until fluffy (I did this in a stand mixer)

Add the flour mixture and stir until everything has just combined.

Divide the batter evenly between two greased and floured 8-inch cake pans (I lined the bottoms of mine with parchment paper).

Bake in a preheated 350-degree oven for 28 minutes or until a toothpick inserted in the center comes out clean.

Remove to a rack and let the cakes cool completely before frosting.

To make the frosting, combine the crushed berries, powdered sugar, vegan cream cheese, butter substitute and vanilla extract using a blender or, as I did, a hand mixer.

Refrigerate for about 30 minutes before frosting the cake.

To put the cake together, unmold one of the cakes and cover the top with about one-third of the frosting.

Place the other cake on top of it and layer on the remaining frosting.

I found this cake tasted even better the day after. 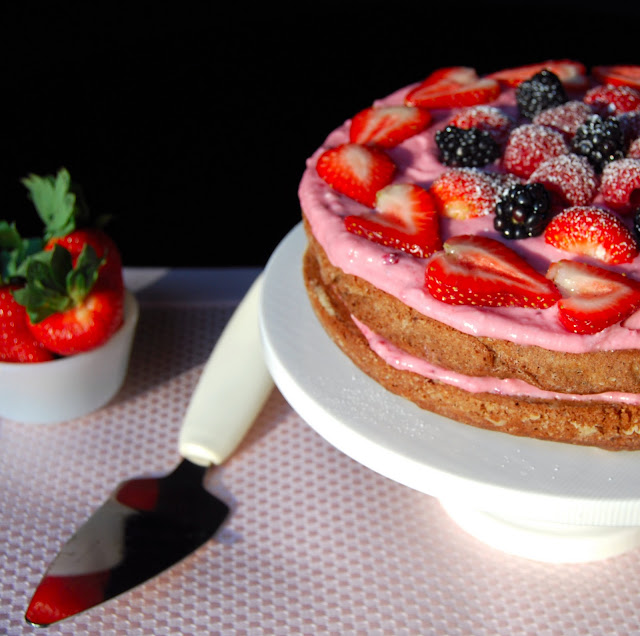