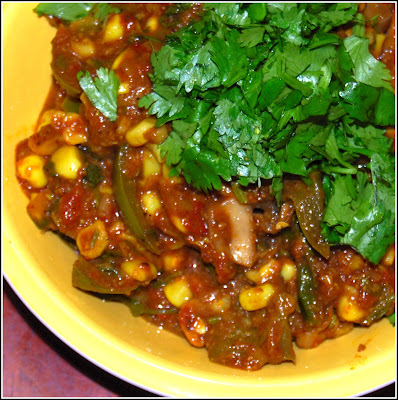 I didn't learn to cook until after I was married. So when I did venture into the kitchen--very, very tentatively at first--I began by experimenting with the help of a few cookbooks recommended by friends and family.

But as any new cook would likely agree, actually seeing someone cook can be a more engaging experience than simply reading from the inanimate pages of a book.

Those were the mid-90s, when India's monotony-afflicted television was just opening up to new possibilities. Lucky for me, one channel began to broadcast one of the country's first cooking shows, Khana Khazana, which was hosted by a genial if slightly awkward host (at least at the time), Sanjeev Kapoor. Khana Khazana translates from Hindi, roughly but appropriately, to a Treasure Trove of Food.

The budding cook in me fell in love with this show. I'd wait for it all week, and when it was about to start, I'd wait eagerly by the television, pen and paper in hand, ready to jot down just about any recipe the chef chose to cook up that day.

Kapoor shared a lot of great recipes that I'd try to faithfully reproduce in my kitchen. Over the months, he helped me become a more enthusiastic and experimental cook.

Today, of course, I don't live in India, and I can no longer watch Kapoor's show that, I believe, is still running. But he does have a Web site now with hundreds of amazing recipes that I love browsing through whenever I can find the time. And although I have come a long way from being green behind the ears, I still find I can learn a lot from his recipes.

Yesterday, I cooked this simple but delicious subzi made with corn, mushrooms and green peppers, inspired by one of Kapoor's recipes.

I tweaked the ingredients, a bit, and the procedure, a lot. The recipe included cream which I left out, of course, but the end result was fabulous: like something you'd order at an Indian restaurant, but also extraordinarily healthy and rich with the flavors of summer.

I served this vibrant subzi with some simple phulkas: puffy and soft chapatis whose earthy flavor was perfect with the spicy goodness of the subzi. 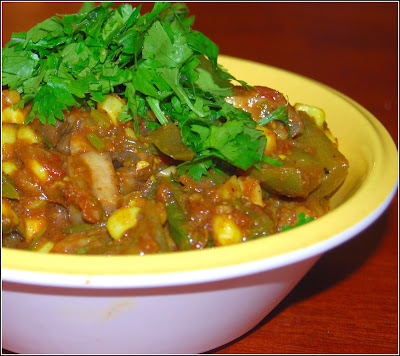 Kernels from 2 ears of corn. I place the corn, narrow side down, in a bowl, and run a knife --as deep as it will go, down the sides, to dislodge the corn. You can also substitute this with 1 cup of corn kernels.

1 large green pepper (You could use red at a pinch, but I prefer the less-sweet flavor of the green pepper in this recipe). Cut the pepper into half, and then into ½-inch strips.

2 cups of mushrooms (I used crimini and button), quartered

1 cup diced tomatoes (I used canned but if you use fresh, two large tomatoes would suffice)
1 tbsp tomato ketchup (one of my favorite ingredients to add a lot of depth of flavor to any recipe that calls for tomato)
2 tbsp vegan butter, like Earth Balance (as a substitute for cream). You can skip this, but try not to because it adds a wonderful richness.

Heat the oil and saute the onions until they start to turn golden-brown.

Add the ginger and garlic and saute another minute over medium heat.

Add the tomatoes and ketchup. Saute over high heat for about 2 minutes or until the oil begins to express.

Lower the heat to medium. Add the coriander, cumin, turmeric and chilli powders and stir.

Add the mushrooms and corn kernels and stir well. Add salt to taste.

Cook for about five minutes until the mushroom and corn are cooked. Now add the green peppers.

Add the vegan "butter" if using.

Garnish with coriander and serve hot with phulkas or any Indian bread and a delicious vegan dal.