You are here: Home | Vegan Italian Recipes | Eggless Broccoli-Tomato Frittata from Kicking Cancer in the Kitchen: Cook That Book 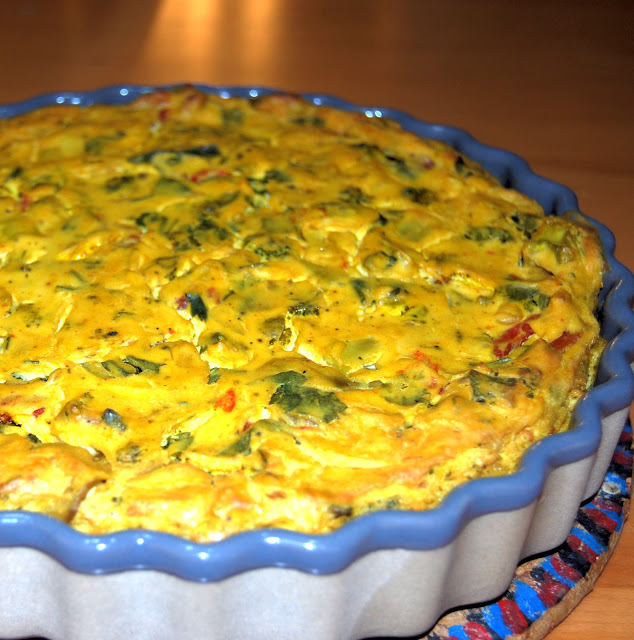 For as long as I can remember, I have loved the idea of food as medicine. Although I am guilty of stuffing my own face with more junk than I should (think french fries, pizza, and crispy, salty snacks--ooh, where can I get some now?), I am an unabashed dictator when it comes to laying down -- and enforcing-- healthy-eating rules for my family.

Lucky for me, Desi is mostly an unfussy eater with a tendency to choose healthy foods, except sweets of any kind which he's crazy about. Opie, who I transitioned to an extremely healthy, homemade diet that is head and shoulders above any store-bought food, truly, madly and deeply loves mealtimes. Pie, my finicky kitty, has disdainfully rejected all of my attempts so far to feed her unprocessed, homemade food, but I'm not giving up.
So earlier this month, when I got a review request for the new book, Kicking Cancer in the Kitchen, I accepted without a second thought. I have a long association with this killer and I'd do anything to kick its ass. Cancer snatched my mom from me when I was just seven. Over the last two years, it has claimed three of my animal family members-- my dogs Freddie and Lucy, and my cat Pubm.

Global statistics on cancer are alarming. You'd think that with all the knowledge we have today, and medical advances, we would have this disease under control. But the World Health Organization actually predicts that cancer deaths will nearly double between 2007 and 2030. In developing countries like India, which once had low rates of cancer, the number of new cases is increasing at a rapid clip.

While some cancers have a genetic risk-- meaning you have a greater likelihood of contracting it if a close relative had it-- the comforting fact is that most cancers can be pushed away by following healthy lifestyles, like not smoking, exercising, and following a healthy diet rich in fruits, vegetables, beans, and grains. Such is the diet promoted by the gals behind Kicking Cancer in the Kitchen, Annette Ramke and Kendall Scott.

The idea of using food to fight cancer is not, in itself, new. A number of doctors and health organizations have long promoted a low-fat vegan diet for preventing, reversing, and surviving cancer. Christina Pierello whose PBS show some of you are likely familiar with, has a personal story of beating cancer with a macrobiotic diet that's nothing short of miraculous. And there is abundant research to show that plant-based diets can actually lower the risk of getting several cancers, including prostate and colorectal cancers and even breast cancer. Some studies have even found a benefit of plant-based diets in preventing leukemia.

But good advice is something one can never get enough of, so the moment I got the book in the mail, I sat down to devour it.What I loved about Kicking Cancer in the Kitchen is that it's not just a cookbook but a comprehensive guide for those who have survived cancer and those looking to prevent it. Both women are certified holistic health coaches and in their book they take a holistic approach to fighting cancer, sharing brilliant nuggets  in sections on alternative cancer treatments, "food friends" or the foods that are good at keeping cancer at bay, foods to avoid, and even what kind of pots and pans to use (think cast iron, not teflon).In the book's first half, titled "The Girlfriend's Guide," Ramke and Scott tell their own stories of being diagnosed with, and surviving, cancer. They talk frankly about topics like chemotherapy, scars, about the loneliness of the cancer journey, hair loss, and friends who stick by you through tough times and those who don't. Their food advice ranges the gamut from eating during chemotherapy to finding your unique "food groove" to tailoring a diet that works best for you.
I was in turns moved and inspired by the first half, but the second half-- made up of delicious recipes-- had me rushing to the kitchen. Over the first three days I tried four recipes and really liked them all: the Eggless Broccoli-Tomato Frittata, the Banana-Pecan Pancakes, the Crispy Kale Chips, and the Sweet Potato Fries. There are many more like Dandelion Greens with Warm Tahini Dressing, Mighty Mushroom Soup, Mint Chocolate-Chip Cookie, and Coconut Ice Kreme with Cherry Swirl that I want to try.One quick note: the book, although mostly vegan, has some recipes that include non-vegan ingredients, like eggs and honey. They are clearly labeled. But it may not be hard to veganize these recipes, if you wish. For instance, I added a tablespoon of flaxmeal mixed with some water instead of the egg in the pancakes, and they were delicious.
I am sharing with you today the recipe for the Eggless Broccoli-Tomato Frittata. Enjoy, all! 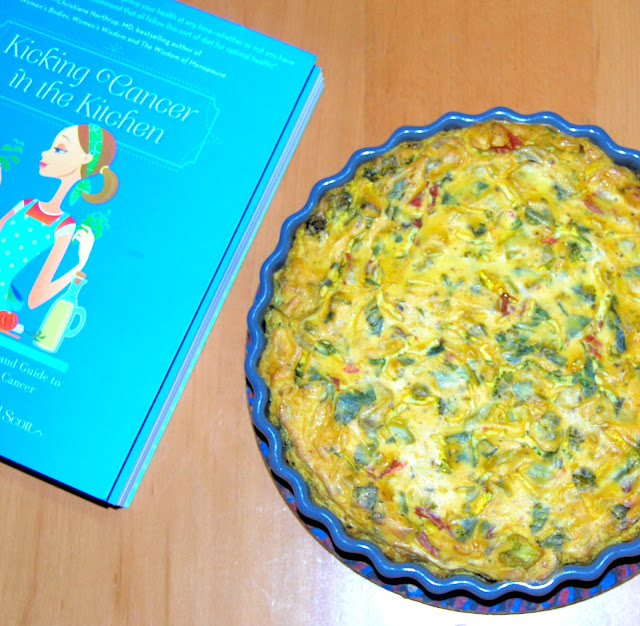 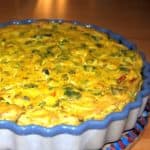 Eggless Broccoli-Tomato Frittata from Kicking Cancer in the Kitchen: Cook That Book 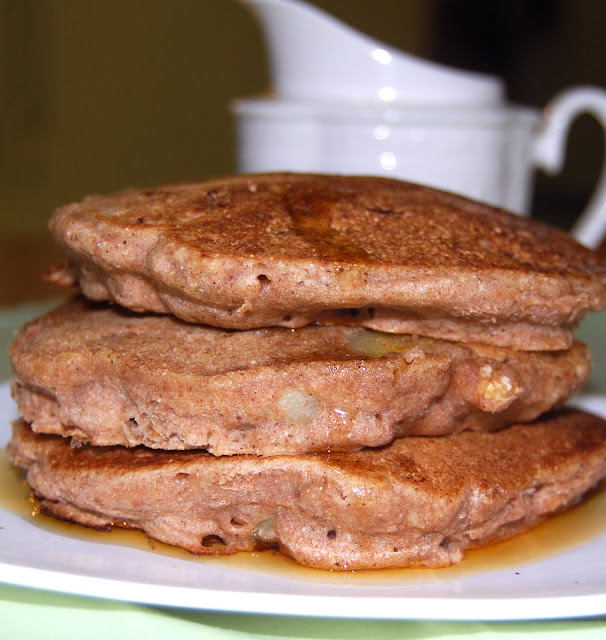 Banana Pecan Pancakes From Kicking Cancer in the Kitchen

Healthy Quickie Snack Tip:I love bhel, not least because it's super-easy to make, fat-free, and it can even be super-healthy if you use the right ingredients. My favorite snack right now is to mix some brown rice crispies (kurmura) in a bowl with a spring onion (scallion), white and green parts finely chopped, a finely diced potato zapped in the microwave until tender, a plum tomato, a few squeezes of lemon juice, and a sprinkle of cayenne. For the crispy, crunchy element I throw in some sunflower seeds (instead of sev, the squiggly, deep-fried thingies you can find in Indian stores and which are a traditional ingredient in bhel).

Just toss it all together and eat. Do you hear your waistline thanking you?

For a more traditional bhel recipe, read this post.