A vegan vegetable omelet that's been made in Indian kitchens for the longest time, this Besan Cheela or Besan Chilla is completely eggless and made with nutty, delicious chickpea flour. Stir in a rainbow of veggies and herbs for more flavor and health. Vegan, soy-free, nut-free, and gluten-free recipe.

It's easy to see why a Besan Cheela often gets called a vegetarian omelet, especially in Indian vegetarian restaurants that serve up this lipsmacking dish. This chickpea-flour pancake from north India resembles its egg-containing counterpart so closely, you might think they were separated at birth.

But the resemblance is entirely skin-deep, because they taste quite different and weigh far apart on the health scale. While the traditional omelet is packed with cholesterol and reeks with that awful egg smell, the Besan Cheela (also called a Chilla) is nuttily fragrant and can be made nearly fat-free if you just spray your skillet  with one of those cooking sprays instead of using real oil.

And because chickpeas are packed with protein, you will definitely not miss out on your protein in this vegan omelet.

How to make a besan chilla

You'll find that this is one of the easiest recipes you've ever made--and the quickest. And it's almost fool-proof.

The starches in the lentils bind with water and firm up as they are heated, much as the proteins in egg would weaken and bind with each other when they hit heat. This ensures that your chilla will be flippable, just like an omelet, although you do need to add some insurance by way of cooking spray or a smidge of oil to coat your skillet. Use a nonstick skillet or a well-seasoned cast-iron skillet.

The Besan Cheela can be pretty much toyed around with to suit different tastes. You can change the veggies you add to it: I added mushrooms, green peppers, onions, and tomatoes, but you could add zucchini, carrots, or spinach (if using frozen squeeze out as much water as you can).

Or you can add herbs: coriander, sage,  parsley, basil, all add different but delicious flavors that make the Cheela just that little bit extra-special each time you make it.

Here's one tip: to make your Besan Cheela extra-crispy, add a mashed potato to the batter. Or just add half a cup of rice flour (preferably brown rice flour to keep it healthy).

Can I substitute chickpea flour or garbanzo flour for besan?

There appears to be some confusion about the difference between chickpea flour/garbanzo flour and besan, which is frequently referred to as chickpea flour, and whether they are interchangeable.
The facts: there are two kinds of chickpeas cultivated in India, one being the regular garbanzo bean we are all familiar with, which has a beige skin and a creamy, smooth taste. Chickpeas are called "kabuli chana" because they are believed to have arrived in India from Kabul, in Afghanistan. Chickpea flour or garbanzo bean flour is usually made from this kind of chickpea.
Then there is kala chana, or black gram, a smaller chickpea with a dark brown skin that's native to India. Kala chana is used to make chana dal, used in dishes like Cholar Dal, and to make besan. Kala chana has a more full-bodied and nuttier flavor than the garbanzo bean.
What you really need to know: Besan and chickpea/garbanzo bean flour are eminently interchangeable and will perform alike in recipes. The only rider is that they need to be finely ground.

What's a good consistency for the besan batter?

Can I make this ahead and store?

A chilla should preferably made just before eating, because it will taste the best when it is fresh. You can mix the batter and keep it in the refrigerator for a day or two, however. It takes very little time to cook the chilla itself. 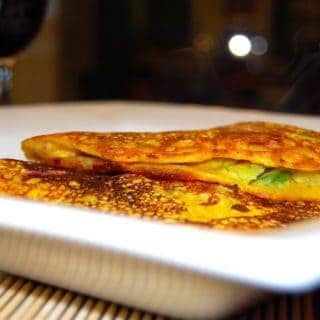