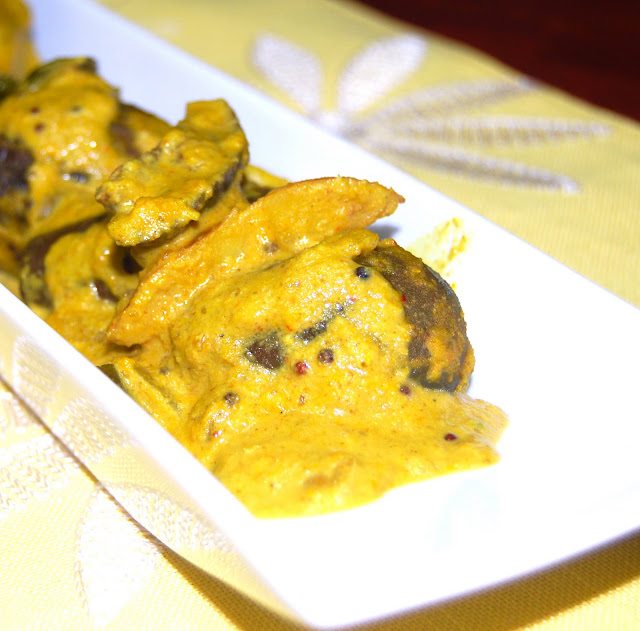 A gingery, peanutty, coconutty sauce drizzled over butter-soft eggplants is a side-dish to die for. Or better still, to live for.

People are often baffled by eggplants. Those who have never cooked with this vegetable are not sure what on earth to do with it. Some have tried it but detest it because all they can recall is bitter, chewy, undercooked flesh and a hard skin.

But undercooking eggplant is an unspeakable kitchen crime against this delicious vegetable– so delicious, in fact, that it tops the list of my favorite vegetables (and that is not a small achievement given how much I love all veggies). Take that as a rule of thumb, in fact– never, ever, undercook your eggplant, and you will learn to love this tall, dark, handsome vegetable with all your heart. 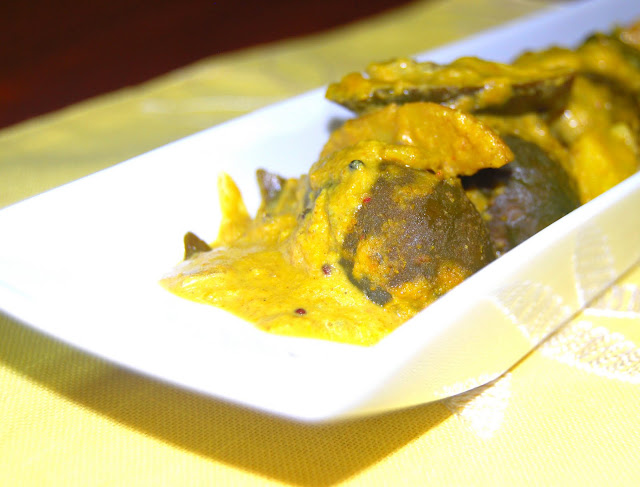 Eggplant is a great vegetable to serve meat-eaters and vegetarians because it has that earthy robustness that’s very deeply satisfying. Layer it in lasagnas, roast it on an open fire and mush it up with spices for a wonderful side dish, or coat slices of eggplant in a pakora batter and fry them up. And those are just three of about a bazillion ways to cook up this veggie. One of my favorite ways to use eggplant is to chop it up, sprinkle it with a little rosemary and salt and olive oil, roast it in an oven, and add it to pastas. Heaven.

For the side dish I am sharing today I roast the eggplants in the oven first to make them tender and compliant before adding them to the sauce. It is a technique I often use to ensure my eggplants are thorougly and completely cooked. Traditional Indian cooks would deep-fry the eggplants first, because that would make them meltingly soft, but here’s a big disadvantage with that: as virtuous as eggplants are, they are also spongy little bastards when it comes to oil. They drink it up thirstily and you end up with about a thousand more calories than you bargained for. Roasting helps them soften up too, but you control how much oil goes in.

And now for some eggplant love: My Gingery Eggplants in Coconut Sauce. Enjoy, all! 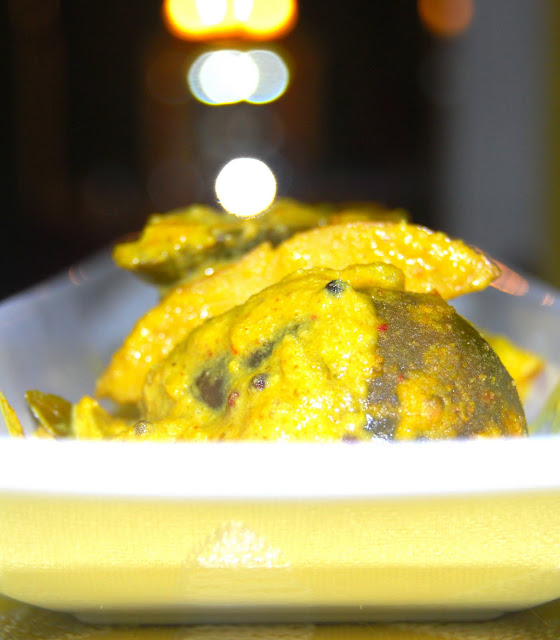 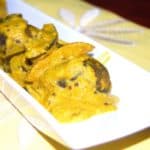 One of the reasons I’ve been slow with the blog of late is that I’ve had a lot on my mind with my cat’s illness. Pubm, my lovely calico cat who many of you already know, was diagnosed in March this year with a poorly differentiated sarcoma that was growing rapidly. We were told that she had at best six months, at worse, two.

The last few months have included several rounds of chemotherapy for Pubm but in June we decided to stop the chemo because the tumor stopped responding to it. Last week her oncologist told us it was time to say goodbye.

It is hard to say goodbye to any animal you love, although it is also usually inevitable, but in Pubm’s case it is almost impossible because I’ve never known a cat so vibrant and curious and, in a single word, perfect. She came to us at the age of six, with her sister Pie, and although we had no intention of adopting a cat (we were at the shelter to pick up a foster dog) the only reason we did was because the shelter volunteer told us Pubm and Pie were going to be put down the next day– two of millions of healthy, young cats who will be put to sleep each year in the United States because there is no room for them at overflowing shelters, and no home that is willing to take them in.

Pubm and Pie came into a home dominated by three dogs, and while Pie has never quite overcome her unease around the larger canines, Pubm slowly but surely managed to put them in their place and find her own. Desi calls her Queenie, because she literally ruled our household with her beauty, charm, and ability to win over just about anyone, cat-lover or not.

We have not yet been able to bring ourselves to make that call to the veterinarian to schedule an appointment, but we know we must at some point, perhaps sooner rather than later. 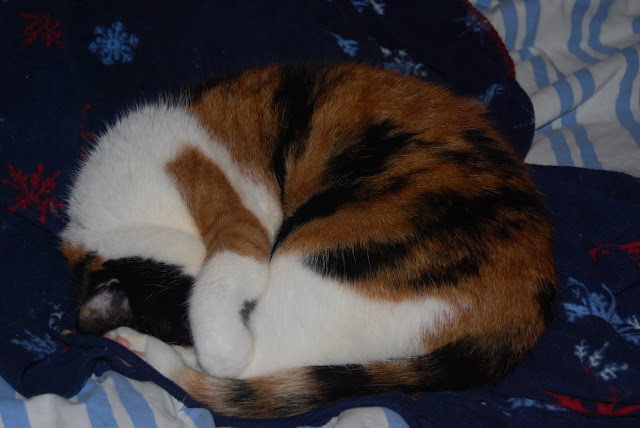 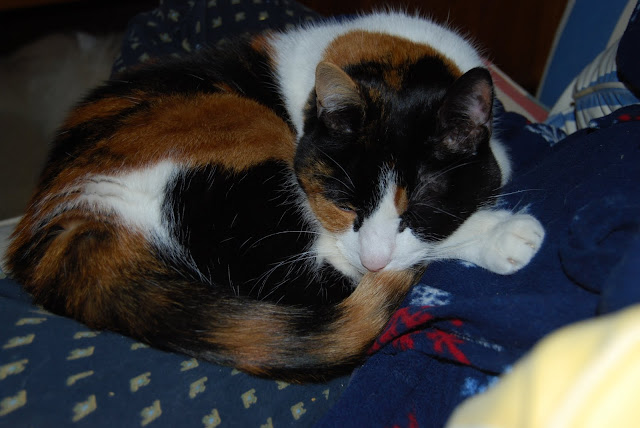 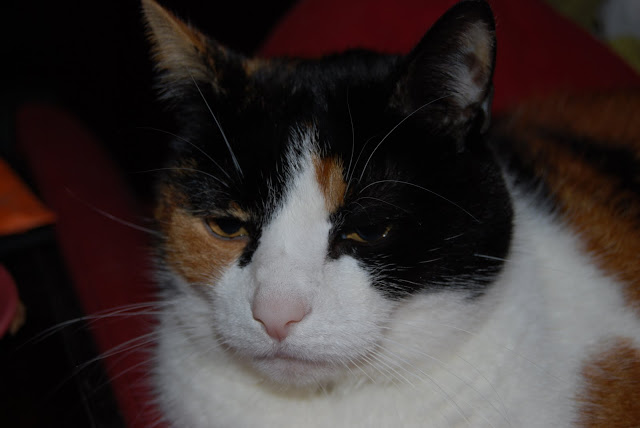 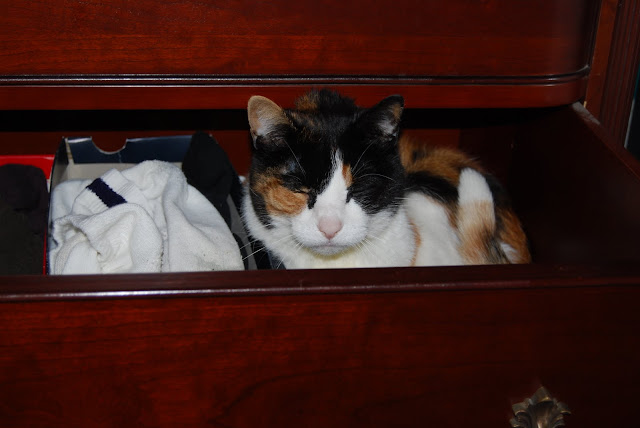 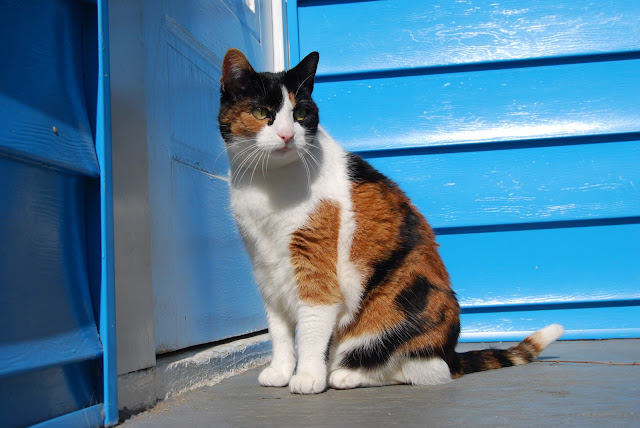