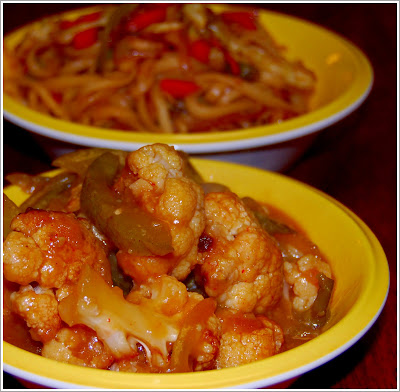 Two diverse cuisines hobnobbing together can produce some pretty tasty results, and a great example of that is Gobi (or Cauliflower) Manchurian.

We Indians have had a long love affair with Chinese food. Long before the '90s brought fast-food chains and their inevitable pizzas and burgers and other junk food pouring into Indian cities, it was Chinese food that most of us wanted when we craved something exotic and different. The food was in a cuisine class of its own and quite likely bore no strong resemblance to real Chinese cuisine since it was heavily adapted for our flavor-seeking tastebuds. At restaurants I have eaten stir-fried noodles seasoned with dry red chillies and mustard seeds and gravied Chinese dishes smothered in Indian spices like coriander and cumin.

Cauliflower Manchurian is one of the more popular products of Indian-Chinese cuisine and it has always been one of my favorites, with its sour-spicy notes and the crispy florets of cauliflower that melt in your mouth. Typically the cauliflower is deep-fried, which gives it that great crunch. Now while I do like to indulge in some deep-fried food once in a while, I also like to keep my meals pretty healthy most of the time. So I baked the cauliflower instead, saving on the fat calories, and the result was still delicious. In fact, I swear that the sauce is so flavorful, you'd never notice that the cauliflower was not deep-fried first. But if you do want the extra crunch, you can always choose to deep-fry the florets in my recipe.

To go with the manchurian I made some stir-fried Udon noodles. These couldn't be simpler-- they take minutes to make and taste great and they're loaded with veggies. Udon noodles are wheat noodles that are typically used in Japanese cuisine, but here I cooked them the Indian-Chinese way. Talk about fusion!

Here are the recipes. It's a busy afternoon, so bye for now. Enjoy, all!

Longevity Noodles with Mushrooms and Ginger 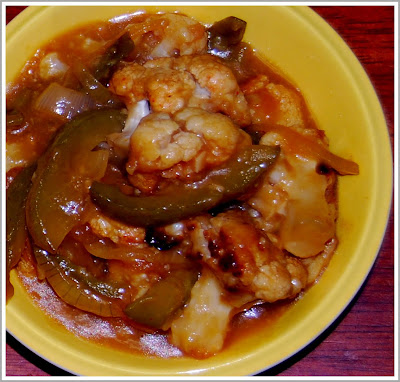 1 medium head of cauliflower, separated into medium-sized florets (you don't want to make them too small or they'll turn mushy too soon)

2 tsp canola or sesame or other oil

Grease a large baking dish. Dip each cauliflower floret into the cornstarch paste and place it on the baking dish in a single layer. Bake in a 450-degree oven for 40-50 minutes or until the cauliflower is cooked but still crunchy and lightly browned.

(If you choose to deep-fry, heat oil -- at least an inch deep-- in a skillet and then deep-fry the florets a few at a time until they are golden-brown)

To make the sauce:

Add the vinegar, sugar and salt if needed, then add the cornstarch-water mixture and allow it to simmer for a couple of minutes.

Add the cauliflower florets and stir well to coat. Turn off the heat after a couple of minutes.

Garnish with chives or chopped spring onions, if desired. 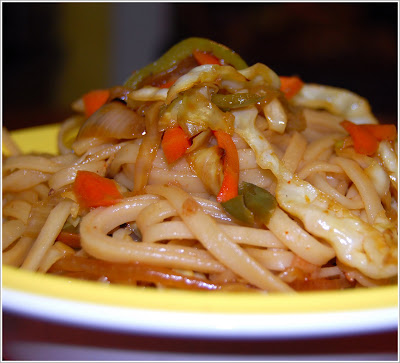 2 tbsp or more as needed of low-salt soy sauce

Cook the noodles according to package directions until they are cooked but not too tender. You need them to be al dente in order to be able to stir-fry them without turning them into a paste. Drain, rinse in cold water, and spread on a plate to cool.

Heat the sesame oil in a large pan or preferably in a wok.

Add the onions, stir-fry for a moment, then add the remaining veggies.

Stir-fry quickly over high heat for about 2-3 minutes until the veggies start to get tender but still have a bite.

Now add the soy sauce and vinegar and hot sauce, if using.

Stir together, then add the noodles. Using a pair of tongs, stir-fry the noodles for another 2-3 minutes.

Garnish with chopped spring onions if desired. Serve hot with the Gobi Manchurian.