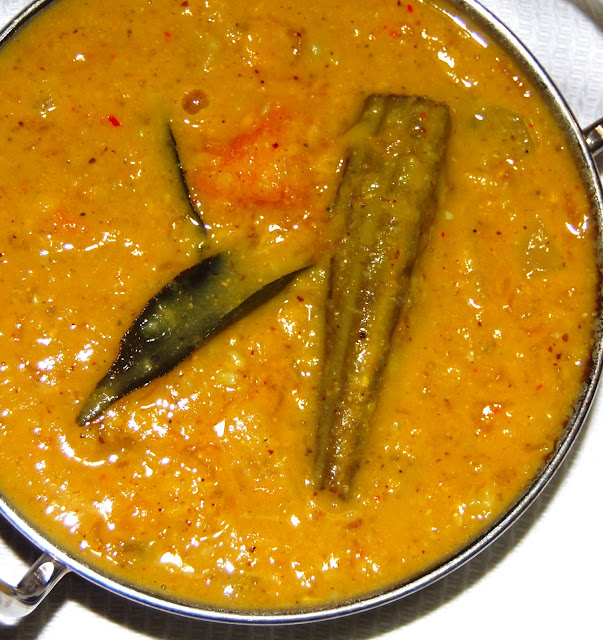 India's regional cuisines are so strikingly diverse that when resemblances and overlaps occur they inevitably make you wonder where the dish could have originated. There's never a simple answer.

A long-running food argument in our home has been over the beginnings of what is perhaps Tamil Nadu's most famous stew: the sambar, or kuzhambu. You would recognize sambar if you've ever ordered a dosa or an idli at an Indian restaurant. It's the lentil and vegetable stew that comes alongside as a dipping sauce.

Lentil stews, or dals, can be found across regional cuisines in India, but what sets the Tamil Sambar apart is the tang of tamarind and the unique blend of spices that go into it. Sambar is one of the most-cooked foods in my kitchen because my Tamil husband, Desi, adores it more than any other food in the universe-- after all, it's what mom would cook.

Then one day I came upon an article that said the sambar may have actually originated centuries ago in the kitchens of Maharashtrians occupying Thanjavur, a region in Tamil Nadu. I went home and gleefully rubbed that bit of information in Desi's face. 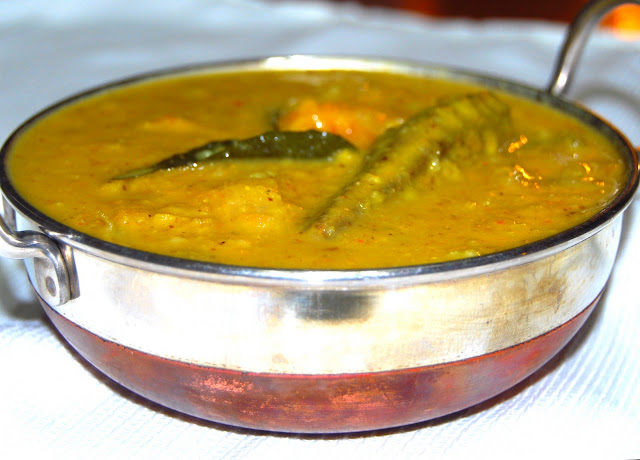 He remains cynical to this day-- and to be honest I have no idea about the article's veracity (it's just something fun to needle him with every now and then). But no matter who first created it, over time the sambar or kuzhambu has found a home in kitchens across south India under slightly different but always delicious avatars.

My recipe today is a version that I grew up eating in my Konkani home and it goes by the similarly different name of Kholamba, or Kholambo. This is my stepmom's recipe, exactly as she would make it, except that I cut down on the oil almost entirely except for spraying the pan a couple of times, once to roast the spices and the other to roast the garlic. Altogether, it works out to less than half a teaspoon of added oil and that's important because let's not forget-- this is the year for healthy, fat-free eating. I also cut down on the chillies: the recipe asked for six, but I knew Desi wouldn't be able to stomach anything over two. My stepmom uses Byadgi, a chilli from the state of Karnataka, which gives the dish a deep red color. I have to make do with whatever chilli I can find here at my Indian store, so my Kholamba looks a little paler.

Kholamba uses more spices than you'd find in a Tamil kuzhambu and there is one surprising addition: garlic, which imparts a fabulous depth. Traditionally Kholamba almost always includes drumsticks and red pumpkin, so I used these, although you can easily substitute other vegetables. Try any squash, potatoes, sweet potatoes, carrots, eggplant, or even green beans. You can mix and match as many veggies as you like. You can also use tomatoes instead of tamarind to add the sour tones to this dish. I went with tamarind because I had that on hand, but use tomato by all means, if you'd rather.

Here's the recipe, then, for a low-fat version of Kholamba, a childhood favorite. Enjoy, all! 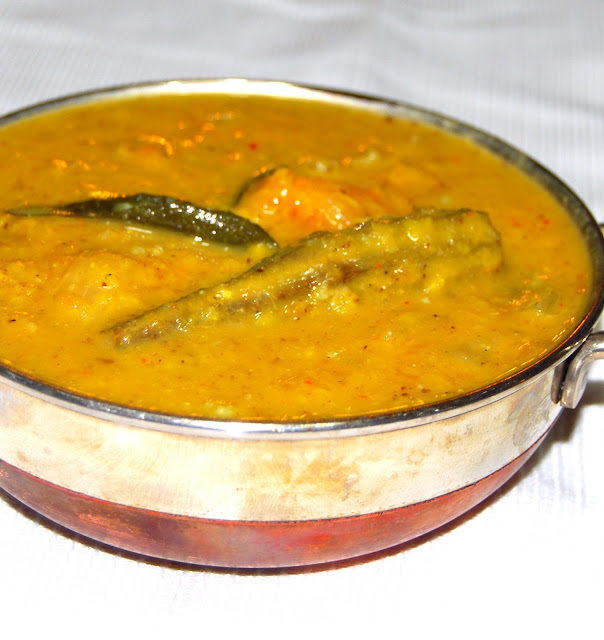 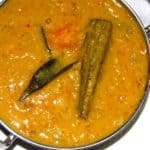