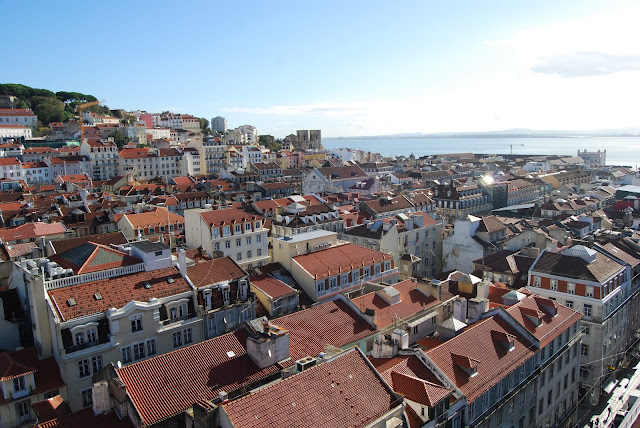 The sidewalks of Lisbon deserve an ode themselves.

They curve, sweep, stagger, climb and drop, leaving a visitor dizzy. But it’s not just that. Paved with sturdy, usually ivory-white cubes of hardy stone, they sometimes burst into a flurry of artistic expression. In plazas and circles and other notably historic spots they mingle with black, blue and other-color stones to make beautiful motifs. And, I suspect, these slippery-when-wet footpaths are responsible for slowing the city down to its charming, easygoing pace.

Desi and I spent a wonderful week recently falling in love with Lisbon, the City of Seven Hills. We landed there on a Sunday, and learned our first lesson about the sidewalks as we (or at least I) huffed and puffed and made our way from the bus stop to the hotel, up one steep hill then another, bags and all. 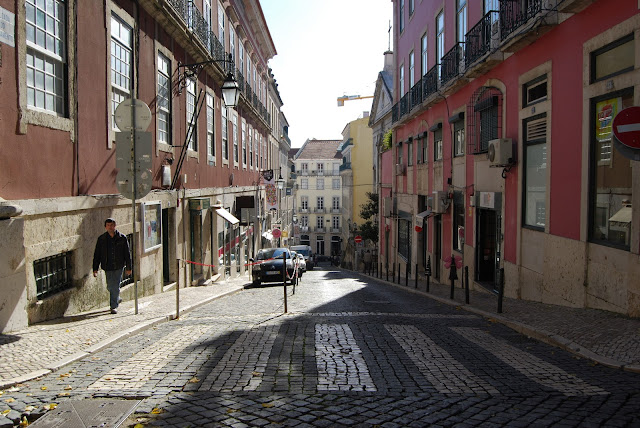 When traveling, we are hardy believers in using public transport whenever possible: it gives us, more than anything else, a great little window into the local life. Imagine this in Lisbon: as the bus buzzes around narrow, old-city streets and past buildings festooned with freshly washed laundry and people hanging out at windows, it plays host to a 40-something man in a fading trenchcoat, briefcase clutched in hand and brow creased as he worries, maybe, about how much longer he has his job in the shifting economy? There's an older woman clutching huge bags of potatoes and chestnuts and other goodies she has just bought at the market and which she will no doubt turn into a delicious dinner for her family. Three happy schoolgirls talking their heads off and sprawled across two seats each, not a care in the world as they chatter on about, perhaps, boys and the new teacher. A teenager with his iPod blaring what sounds like Portuguese hip-hop so loud that it feels as though the bus has piped-in music.

You can’t find an easier city than Lisbon to navigate by public transport. Trams and funiculares scurry up and down the hills, an efficient metro chugs swiftly underground, and massive ferries glide across the historic Tejo or Tagus river which was the starting point of Christopher Columbus and Vasco da Gama’s world-changing voyages.

Despite all that Lisbon has going for it, in the week before we left, a question we’d often get from friends was: Why Lisbon?

The cynicism, of course, stems from the fact that Lisbon does not enjoy the hip glamor of its European cousins like London, Paris, Rome, etc. At this moment, Portugal also stands at a particularly trying point in its long life. Once a colonial superpower that ruled nations overseas, the tiny country now plays poor cousin in the European Union to heavyweights like France and Germany. On our flight to Portugal, every international newspaper I picked buzzed with news about Portugal’s deep financial troubles, strikes to protest government austerity measures, and the inevitability of an EU bailout.

But all of this is just a speck in Portugal’s glory-studded history and does not, for sure, take away from the pure delight of being a visitor to this country. Lisbon is rivetingly, breathtakingly beautiful, and it’s not the polished, sophisticated beauty of your average European city but rather the beauty of raw, real life. In fact, at times the back-to-back apartment buildings with curving balconies and water-stained paint almost reminded me of being back in my delicious hometown, Bombay. 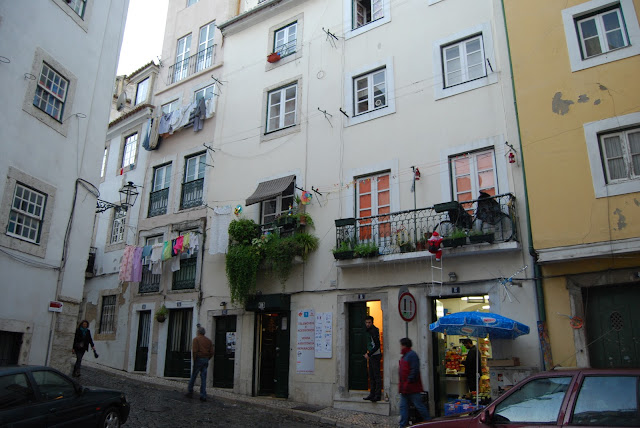 Climb or take the funiculaire up to one of those high points in the city designed to take a visitor’s breath away and a picture-postcard beauty reveals itself. Houses with walls covered with beautifully painted tiles and red-earth-tiled roofs roll up and down the hills, all the way to the horizon where the Tagus twinkles in the mild November sunlight. Here and there a palace or a church or a castle raises its head.

There’s a lot to see and do in and around Lisbon, especially for a history buff. You can visit the beautiful Monasterios Jeronimos in Belem with the tomb of Vasco da Gama, the Belem Tower on the Tagus, or take a bus up to the historic Castelo de Sao Jorge. Or, just for fun, take the 100-year-old, intricately beautiful elevator-- Elevador Santa Justa-- all the way up to the top to get another great view of Lisbon. Once up top, you can walk to the hip Baixa district, reconstructed after a massive earthquake that rocked Lisbon in 1755, and now a trendy home to restaurants and retailers from around the world. 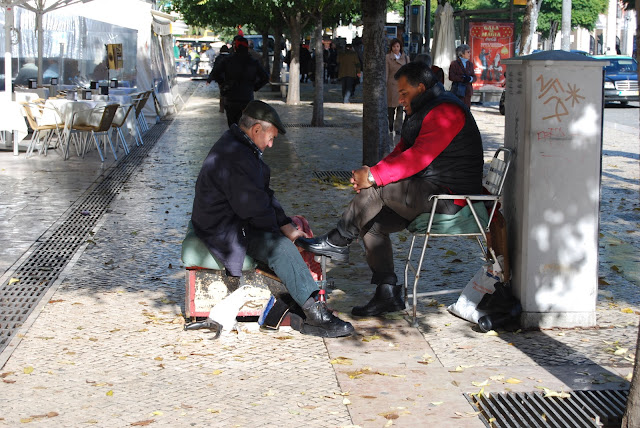 Or you can just take a load off your feet at one of those broad, beautiful plazas, each one home to a statue of some Portuguese hero or the other, like the Praca de Rossio where young people roller-skate at night on a makeshift rink. 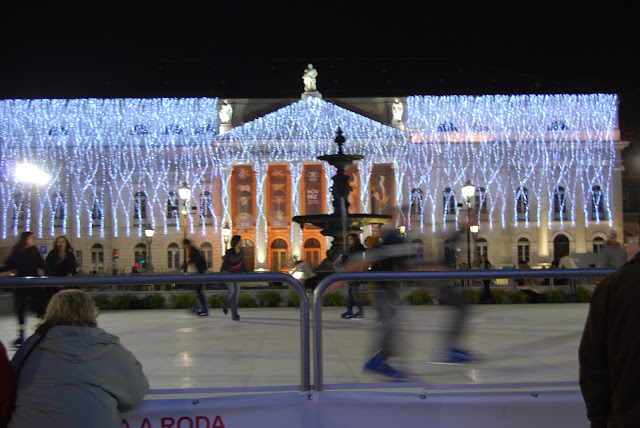 More beautiful places are just a short train ride away. We took one morning the train to Sintra, a quaint, delicately beautiful town with rich summer palaces, some now converted to hotels and inns in an effort to preserve them. The colorfully beautiful Pena Palace, open to visitors, looks down on the city and on the Atlantic from its privileged spot on a hill.

The grounds of both the Pena Palace and the Moorish castle nearby, built by Arab intruders all the way back in the 9th century, offer incredibly top-of-the-world views. Both are also swarming with cats. The cats are extremely friendly which perhaps is not surprising since they see the visitors as a source of food. Most will rub against your legs, let you scratch their ears, then sit down and look at you soulfully, much as my own kitty Pubm will when she wants to score a treat. 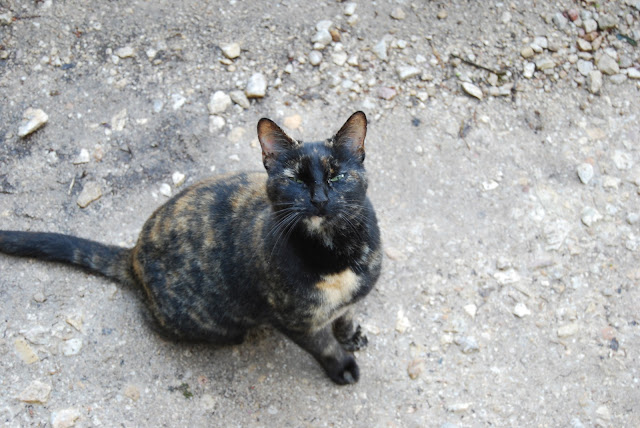 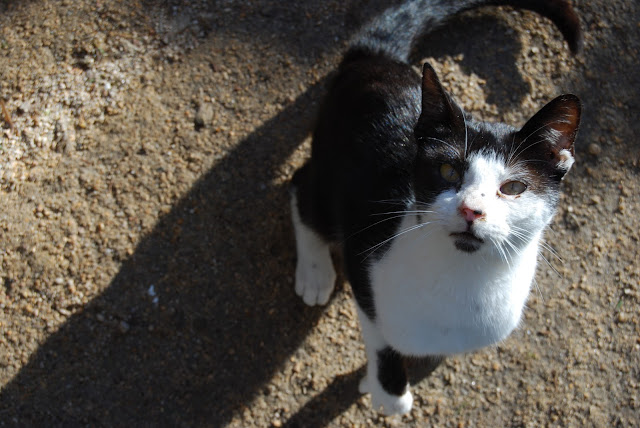 On the bus from Sintra to Cascais, with a stop at Cabo da Roca-- the spectacularly rocky, westernmost point in Europe-- my heart was stuck in my throat as the driver climbed up narrow, two-way streets, honking before each precarious turn because the bus swallowed both lanes, leaving no room for a vehicle driving in the opposite direction.

I’ve posted today some of the pictures Desi took of life in Lisbon-- I thought you might enjoy looking at those more than just pictures of monuments and structures and landscapes because, honestly, don’t faces tell a better story? 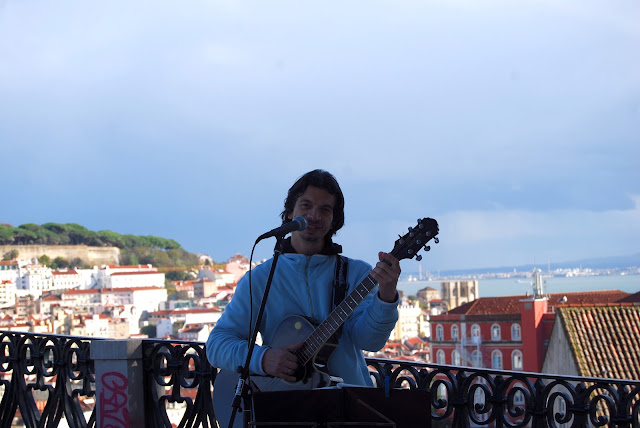 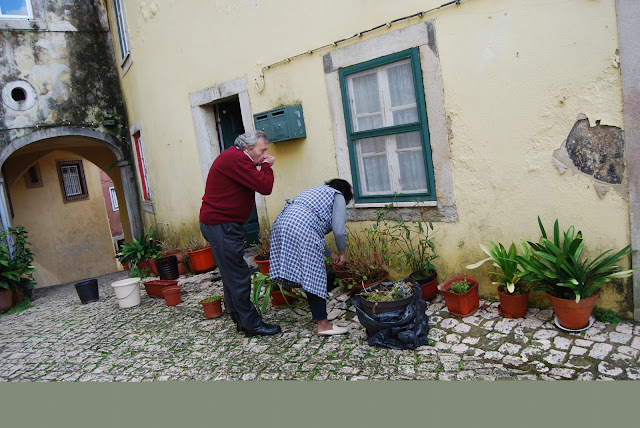 A couple tends to their roses outside their Sintra home. 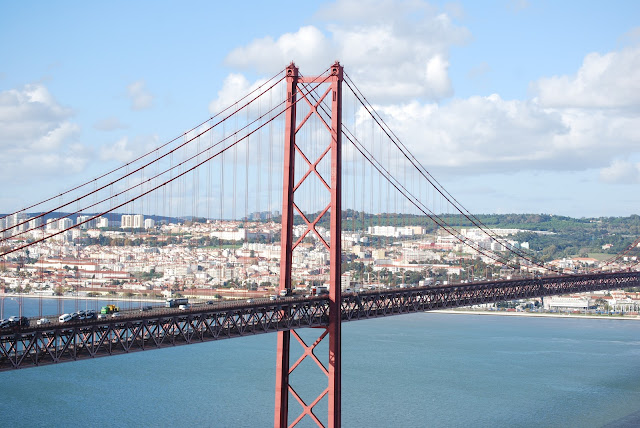 The 25th of April Bridge across the Tagus, which looks awfully like the Golden Gate Bridge in San Francisco-- perhaps because, if Wikipedia is to be believed-- it was built by the same company. 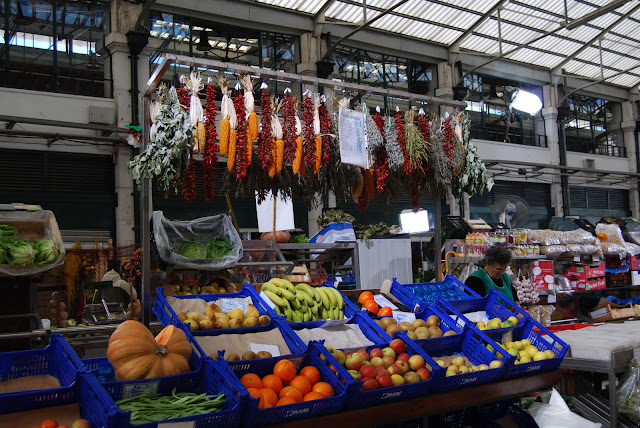 Colorful fruits and vegetables and more at the Mercado Ribeiro 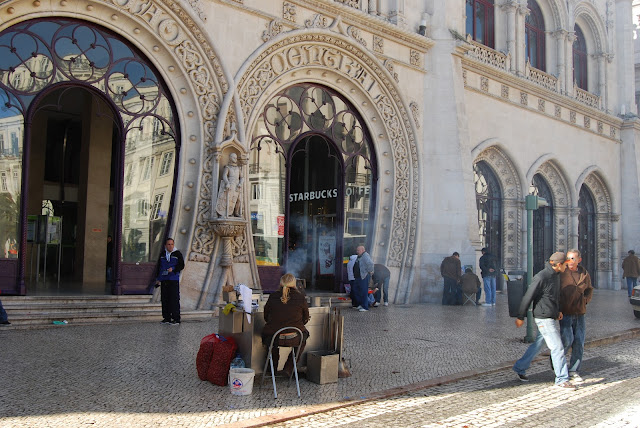 The traditional and the new: A woman sells roasted chestnuts outside the beautiful building of the Rossio Station, home also to an outlet of international coffee behemoth Starbucks. 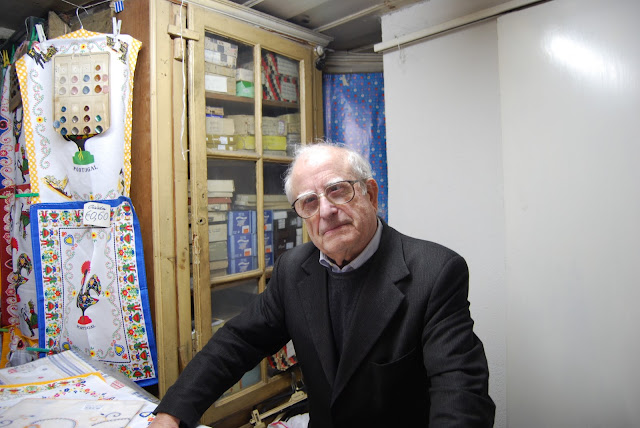 A gentleman selling souvenirs in the Alfama district of Lisbon, home to lots of restaurants with live fado (blues) performances. 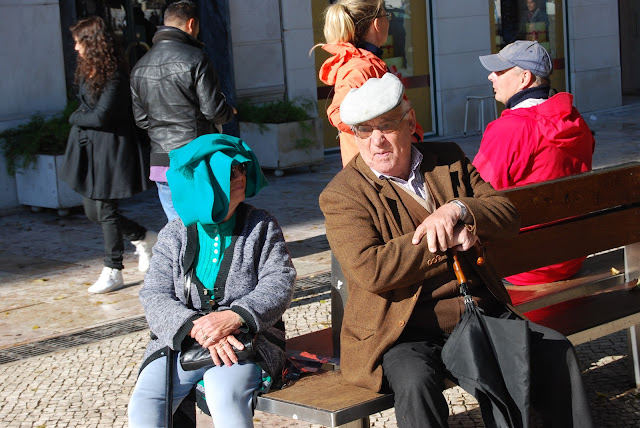 A couple takes a mid-day break. 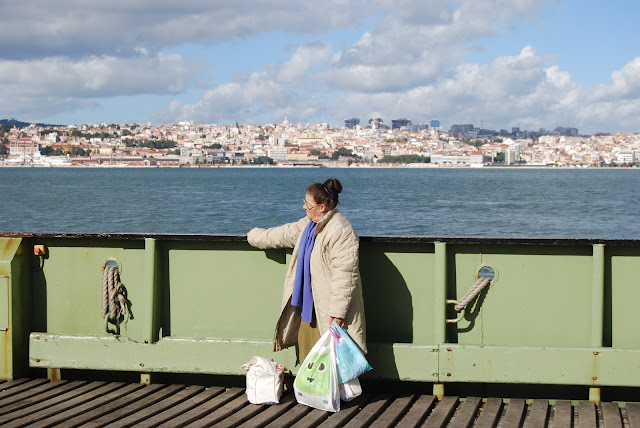 A local woman on the ferry home from Lisbon, across the mighty Tagus river. 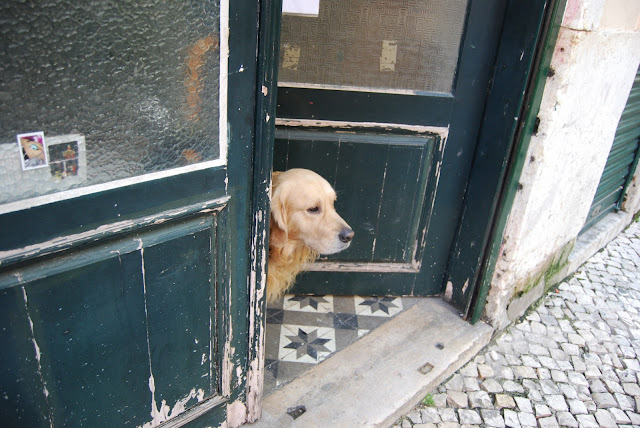 All I could think of when I saw this highly self-restrained guy was, what would happen if I left Opie alone with an open door? I dare not think of the possibilities! 🙂 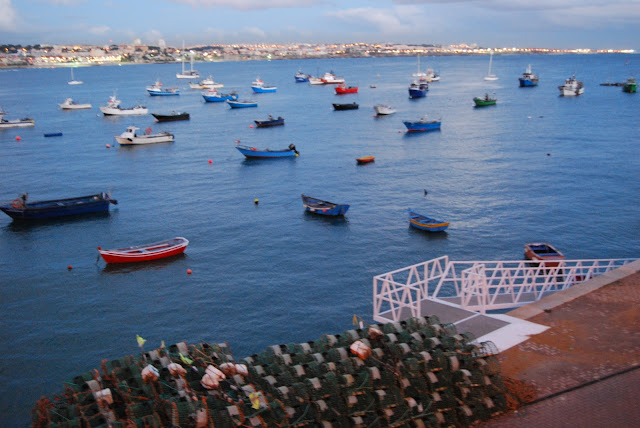 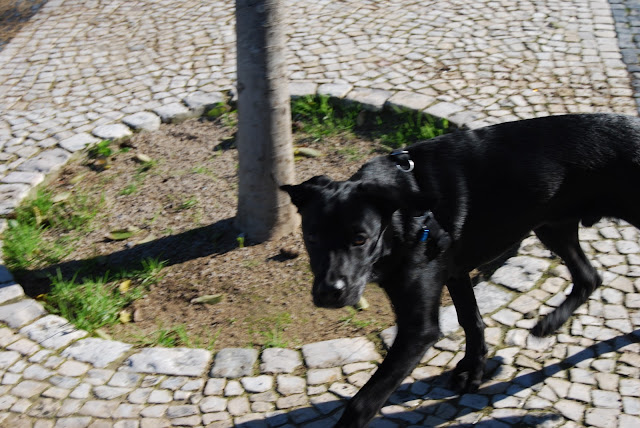 This young fellow, Momo, was a rescue from the streets of Spain, his mom told me. He couldn't be cuter, as he ran around with her energetically, motivating her as she jogged and stretched at an overlook in Barrio Alto. 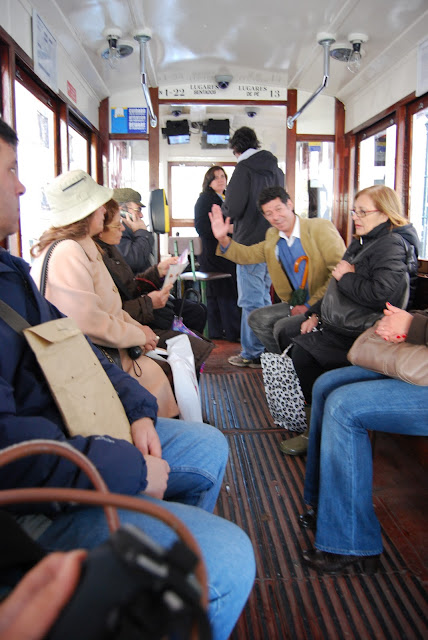 Locals ride the funiculaire home and to work. The sunshine-yellow tram travels a steep and short path lined on either side by homes and businesses. 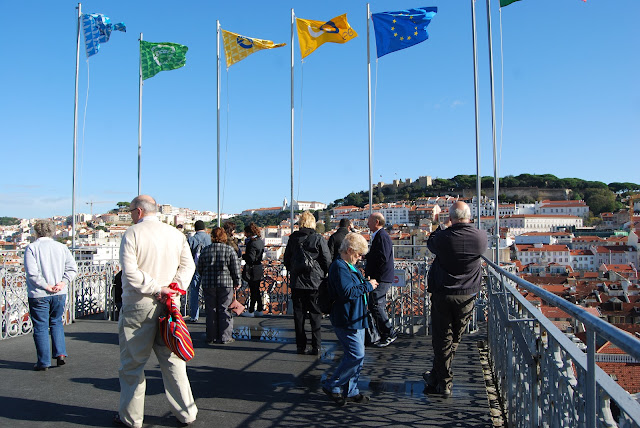 Tourists enjoy a bird's-eye view of Lisbon after taking a ride to the top in the Santa Justa elevador, a beautiful iron elevator built in 1902. 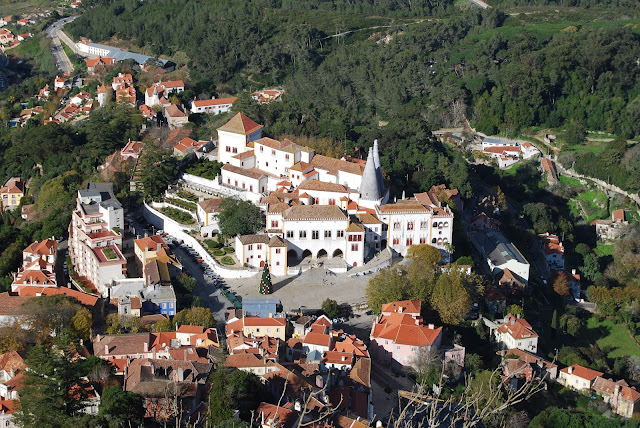 ***
Our camera is on the fritz again, this time with a broken flash. We hope to have it back from the repair shop in a couple of days, and I can then share with you a vegan version of Lisbon's uber-popular custard tart.