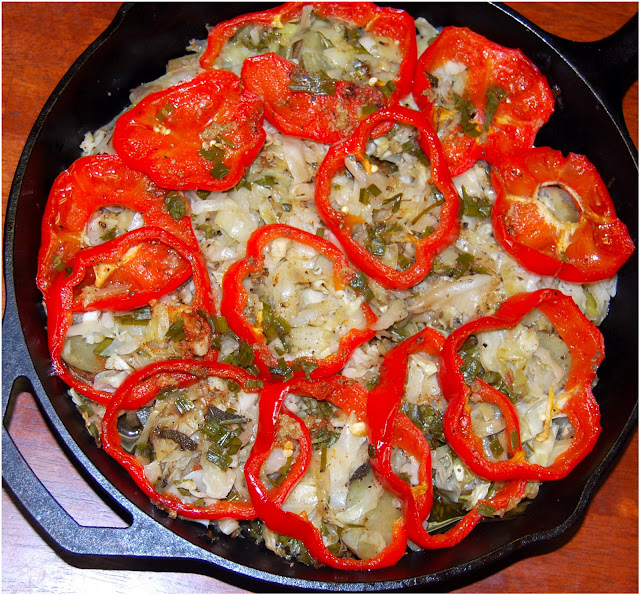 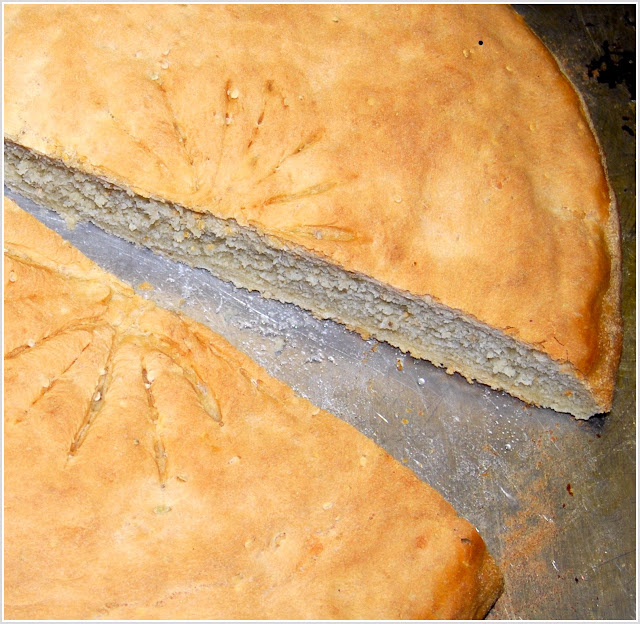 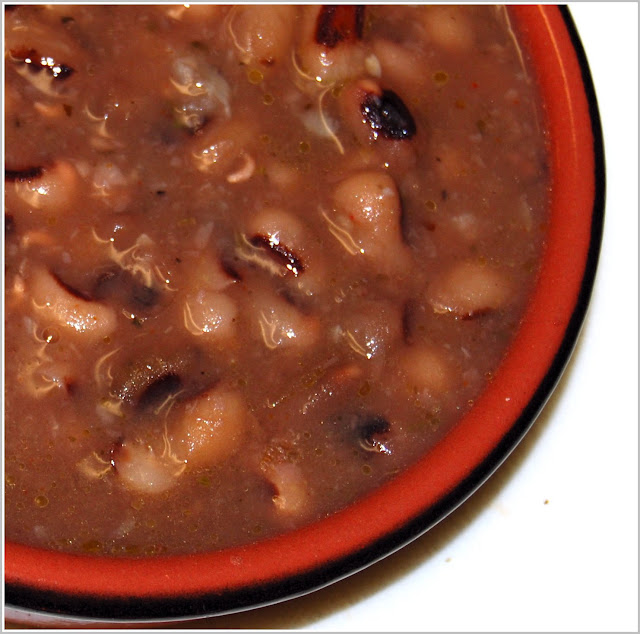 This is not really a feast but more like every day Moroccan food. Still, it tasted so good to me, I couldn't call it anything else.

There is a vegetable tagine here with tons of colorfully delicious vegetables. A stew made with one of my favorite beans-- the rakish black-eyed peas. And a simple, utterly delicious and fluffy bread that was, honestly, the easiest bread I've ever baked (and I've baked a few), requiring just one single one-hour rise.

The natural flavors of these wholesome foods are infused and highlighted by the fragrance of herbs and some very simple spices, like cumin, paprika and anise.

All three recipes are loosely based on ones I found in the World Vegetarian which, as I've often said before, is one of my favorite cookbooks. Loosely because I changed many ingredients and some of the procedure based on what I had in my pantry and the time I had to cook.

Since I'm posting three recipes here, I'll keep the chatter short. But this I'll say-- it was one of the most flavorful meals I've ever had. 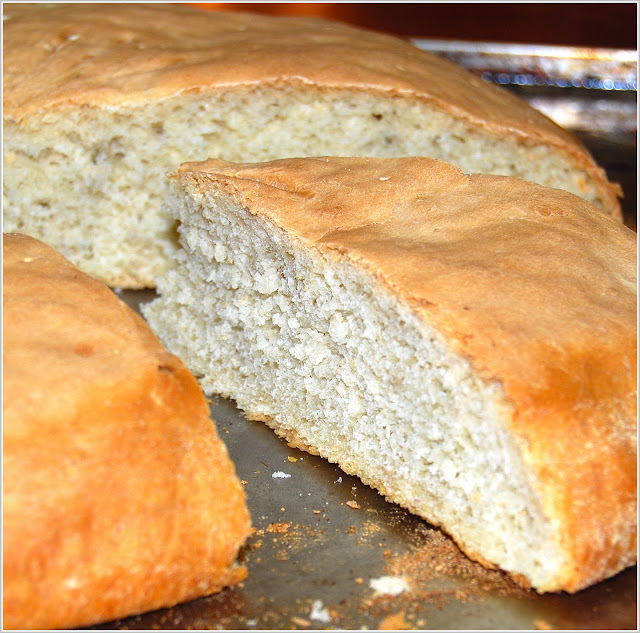 Mix in a large bowl:

Let stand for the yeast to start "flowering" and bubbling, about five minutes.

Now add to the bowl:

Mix by hand or with the dough hook of a stand mixer set to low, trickling in warm water (about 1 cup) until combined.

On low speed, or by hand, knead the dough for another 8 minutes, until it is soft and smooth.

Prepare a baking sheet by greasing it lightly and sprinkling some corn meal on it.

Pat out the dough to a disc about ½-inch thick.

Pick up carefully with both hands and transfer to the baking sheet.

With a very sharp knife, score a star or sunburst pattern in the center of the loaf.

Cover the loaf with a kitchen towel and allow it to rise in a warm place until doubled in height, around 1 hour.

Preheat the oven to 400 degrees.

Now pierce the loaf on both sides with a fork, and place in the hot oven.

Bake 25-30 minutes or until the top has browned and the loaf sounds hollow when tapped on the bottom.

Cool on a rack. Cut into wedges and serve. 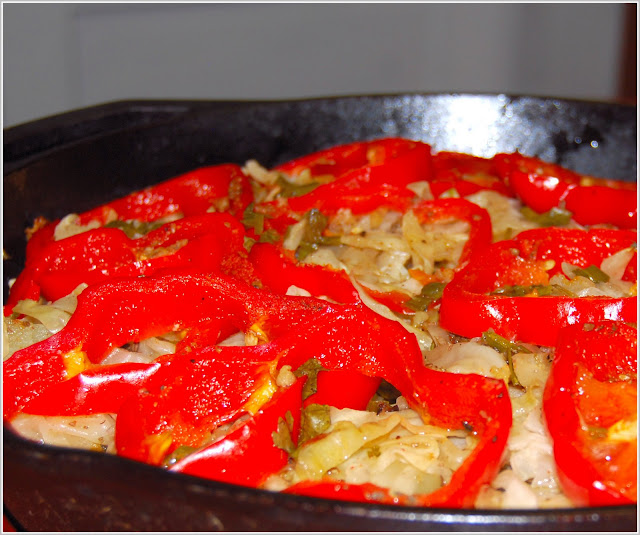 Slice thinly into rings or discs:

Set aside and prepare:

You will also need:

(A tagine, an unglazed clay pot, is typically used to make this dish, but I just used a cast-iron pan with an oven-safe lid. Be careful lifting it in and out of an oven because it tends to be heavy.)

In a 12-inch cast-iron skillet, layer the vegetables in the following order, sprinkling equal portions of the cumin powder, paprika, pepper, salt, garlic, and the herbs over each layer:

Once you have sprinkled all the remaining herbs, spices and salt over the red peppers, mix together the olive oil and water.

Pour evenly over the vegetables.

Cover with a tight-fitting lid or with tin foil.

Place in a 350-degree preheated oven. Bake 60-70 minutes. In the last 20 minutes of baking, use a bulb baster or a spoon to scoop up liquid from the bottom of the pan and pour it over the veggies. 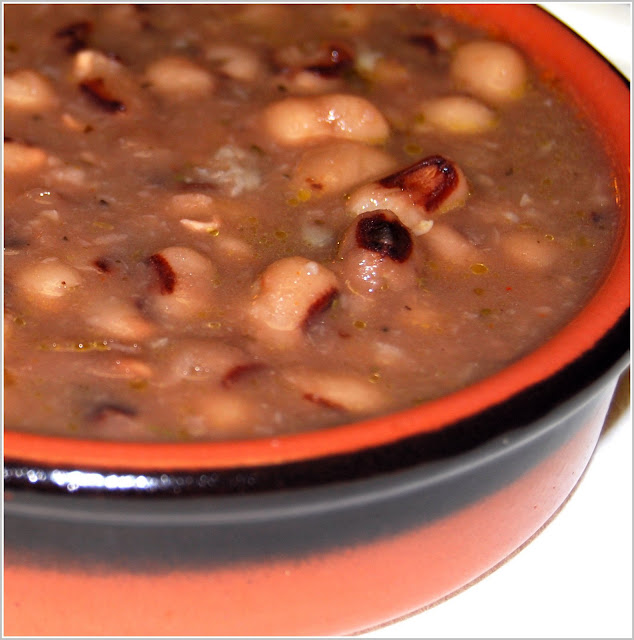 Heat the olive oil in a skillet

Add the chili, and when it turns a few shades darker, in a few seconds, add the garlic and stir for a minute.

Now add the black-eyed peas with any cooking water that's left, all herbs, and salt.

Add water if needed, so the stew is fluid and not too thick.

Simmer, uncovered, for about 20 minutes. Specks of oil will rise to the top of the stew.

Check for salt and turn off heat.

Serve hot with the bread and vegetable tagine.

And for another great Moroccan stew, try out Holy Cow's Chickpea Stew.

***
Michael Jackson's dead, and the world is devoid of music, at least for a day.

Michael was one of my first connections with my adopted country, America, when I was a little girl growing up in Bombay. I would listen to his music all the time, any time, even when I sometimes couldn't discern the lyrics sung in his quicksilver voice.

Later, it was a dream come true when I was among the reporters at the Telegraph assigned to cover the Michael Jackson visit and concert in Bombay in the mid-90s. While I hated covering celebrity stories, this was a huge exception.

My colleague Anita and I spent hours waiting to catch a glimpse of him in the lobby of the Oberoi Hotel when he arrived. With us in the crowded lobby -- so crowded you could barely move an elbow-- were thousands of guests from around the world, each one eager as a child. When we did see Michael, stepping out of the elevator, a shout of excitement went up in the lobby such as I've never heard before or since.

When his car was en route from the airport to the hotel, people lined the streets. People of all ages, people you'd think wouldn't be interested in his music, so far from America. At one point, he got out of his car and danced with the slum kids of Bombay whose plight finally resonated in Hollywood last year with Slumdog Millionaire. It was a thrill not just for the kids, shouting "Michael, Michael," but for every resident in the city.

At the concert, people passed out, which is apparently something that happened all the time at Michael Jackson concerts. A young woman who was plucked from the audience and called on stage became a tiny celebrity herself for days afterward, with every newspaper clamoring to interview her.

Years later, I saw Michael sing again, this time in DC, as part of the United We Stand concert to remember the September 11 victims. Many other musical stars had sung at the concert that evening, but no one else commanded the applause, awe and attention that Michael Jackson did.

What a loss this is for the whole world. We'll always remember you, Michael.