You are here: Home | Travel | Mumbai: Life Along the Railway Tracks 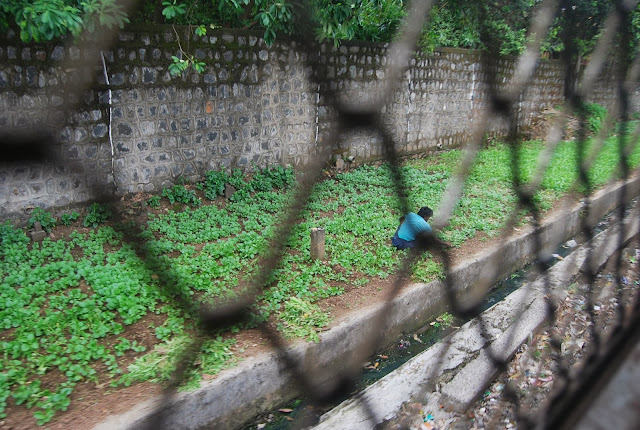 A man tends to spinach growing alongside the railway tracks in Mumbai. Railway authorities lease out the land to farmers and the veggies grown here find their way to local markets. The farms are not without controversy-- as you can see they grow alongside sewers and trash, raising questions about health and safety.

The local trains of Mumbai are as legendary and chaotic as the city itself. Each day they chug across a vast network of tracks, ferrying millions of passengers from far-flung suburbs to work and college and school or-- best of all-- home. But the tracks also play what might seem to an outsider an unlikely role: they are home to hundreds of thousands of residents of this hardscrabble city who live along the tracks, cook and eat here, sleep here, and even play here.

Take a ride in a local train and you will find some unexpected and even heartwarming surprises both outside and inside the trains which despite the bustle and noise tend to be a place where friendships are often struck between fellow travelers. Mind you, it's not an easy experience catching the local in Mumbai. I was born and raised in this city and I was a seasoned traveler for all the time I lived here, but this time the very idea of getting into a local made me nervous because I felt so rusty with my technique. And as any Mumbaikar will tell you, there is a very specific technique. You need to know exactly where to position yourself on the platform, and at which stage-- even before the train comes to a stop -- you need to jump in and rush to find a seat. There's absolutely no time for indecision or hesitation or, indeed, dignity. A second's delay and you could be standing, pressed up against the sweaty arm of a fellow traveler, for the hour it takes to get to your destination. Getting out at your stop, before you get pushed back in by more passengers getting in, is also an art (one that involves a lot of elbowing and, sometimes, shouting).

But the locals of Bombay are efficient-- they will get you to your destination on time and usually much faster than a ride in a car, despite the city's brand-new network of freeways and flyovers. So when we needed to take a ride to meet some family in a suburb during our stay in Mumbai, Desi suggested the local train. After some hesitation I agreed only because it was a Sunday and he promised we'd get first-class tickets (yes, the local trains have a first class and a second class and a separate ladies' compartment for each class. There even used to be a ladies' special train, meant as the name implies only for women, during rush hour although I don't know if that exists anymore.)

So into the train we got, after passing a row of metal detectors at Churchgate station (a grim reminder of the terrorist attacks in the city in 2008 which, among other places, targeted a busy Mumbai railway station). We found ourselves a seat pretty easily-- no elbowing required-- and sat back to watch life go by. Here are a few memories I wanted to share with you. The grill in the window was unavoidable and I was in a moving train which made it hard to always capture exactly the picture I wanted, but I hope you enjoy them despite these limitations for the life they depict. 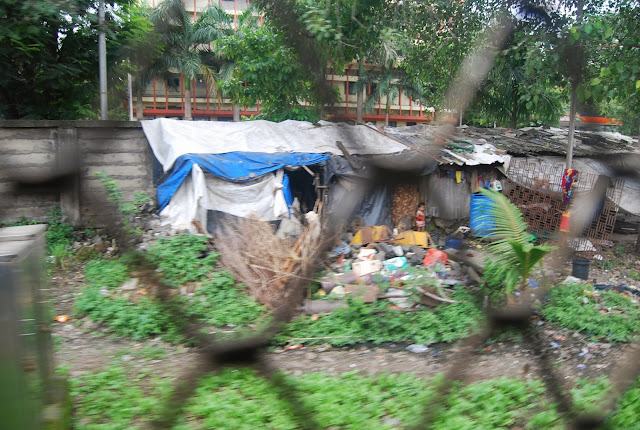 A child stands outside a makeshift home along the railway tracks, oblivious to the noise made by the locals that zip by every few seconds. And below, the tracks serve as a playground for children who live in the slums lining the railway tracks. A scary sight for safety-minded visitors, but a normal one for anyone who travels these trains every day. 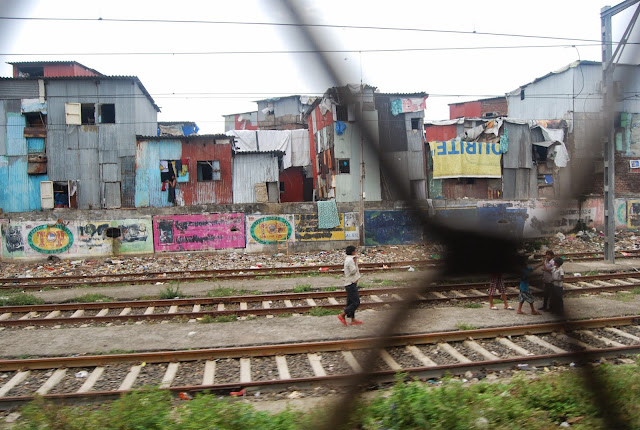 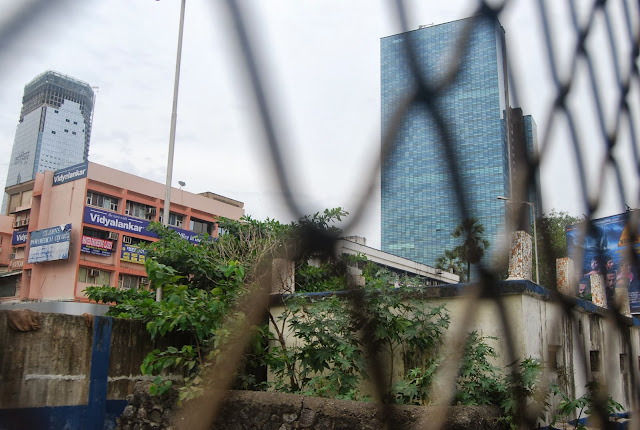 Construction is everywhere in Mumbai, including near the railway tracks where glossy skyscrapers rub shoulders with slums and smaller buildings. 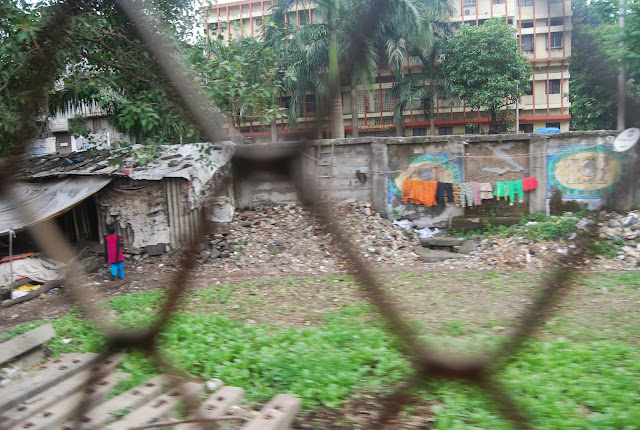 Clothes dry outside a shelter along the railway tracks. And below, a man finds an unlikely spot to relax and enjoy the evening air. 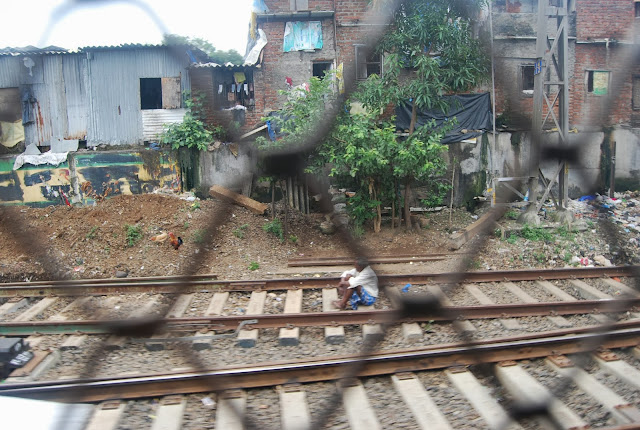 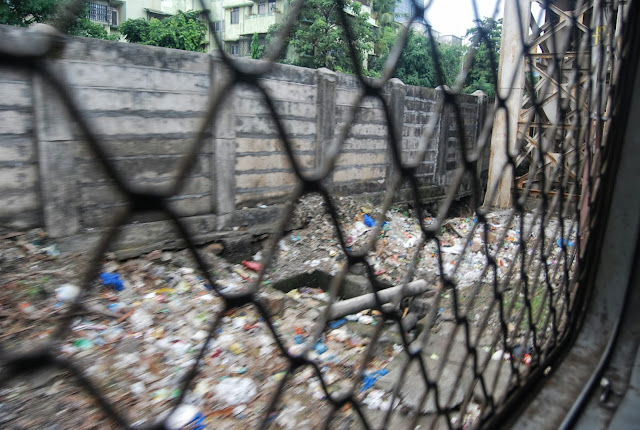 Piles of trash like this one are a common sight along the railway tracks. 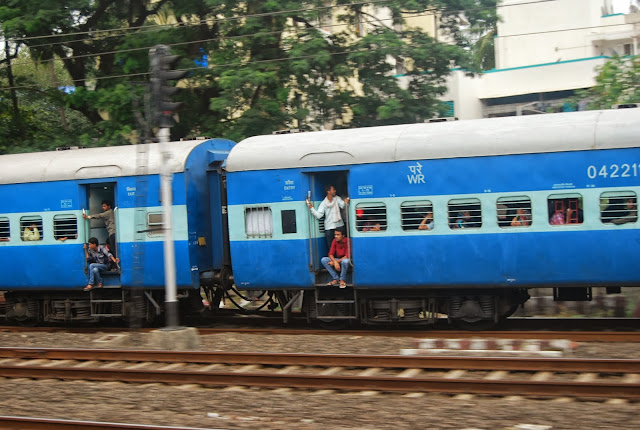 A long-distance train rides alongside the local. Note the men sitting and standing in the doors-- a common sight in Indian trains. During rush hour you will often find riders standing on the parallel bars of the windows and on top of local trains to get home sooner.
(C) All recipes and photographs copyright of Holy Cow! Vegan Recipes.