Pav Bhaji is the ultimate street food from Mumbai, a city that’s always close to my heart. It’s a mad mash of potatoes, tomatoes, onions, cauliflower, green peppers, green peas and spices, and you scoop it up with an airy, soft pav — a bread roll. It’s also a remarkably easy dish to make, and it comes together in minutes. You can make it gluten-free by using gf bread rolls. A vegan, soy-free and nut-free recipe.

The story of Bombay or Mumbai, a city unlike any other, can be told through its vibrant street food: a smorgasbord of dishes so explosively delicious that you cannot help but be addicted after a single taste. And one of the most unique of these dishes is Pav Bhaji, a fiery-red but not too spicy vegetable mash that’s scooped up with a fluffy, buttery, toasted bread roll called a “pav.”

This is the food of the masses, food that sprung up in makeshift stalls outside the city’s mills and factories and railway stations to fulfill workers’ need for cheap, easily accessible and quickly served eats during the workday and especially at lunch.

Vendors borrowed elements of home cooking, took what was at hand, easily available, and not easily spoilt, and threw it all on their screeching-hot, three-foot-wide tavas (griddles) with a good dose of butter and spice. Then, they mixed it all together into something incredibly delicious and even moderately healthy (although not remotely hygienic) with the clackety-clack of their square steel spatulas.

Restaurants were quick to cash in on the popularity of street food by introducing versions of it that you could eat in more sanitized surroundings. And while most “street food style” restaurants serve great approximations, the fact is that to truly savor Bombay’s street food, you should be eating it standing up, with the pavement under your feet and the sound of the city thundering in your ears.

As a Bombay gal through and through (although I haven’t lived in my city of birth for nearly two decades now), street food runs thick in my veins. I love it all, but if I have to pick one favorite, it would have to be Pav Bhaji.

There’s something about this dish that makes it a little more alluring and perhaps it is the fact that this is a true street food.

Let me explain that. Many of India’s — and Bombay’s — street foods incorporate elements of home cooking with added street flair. A misal, for instance, riffs off from usal, a popular Marathi dish of sprouted legumes, smothering it with onions, lemon, cilantro and sev. A vada pav takes that deliciously round and crispy fixture of every Marathi celebration, the batata vada, and sandwiches it inside a bread roll with tons of spicy garlic chutney.

But there is no homecooked food that a Pav Bhaji derives from, at least so far as I know.

In my years in Bombay I never ate a homecooked version of Pav Bhaji. But craving it after moving here, I came up with this recipe many years ago and shared it with you at the time, almost a decade ago. I am resharing it today with the recipe almost intact (because you can’t best something that’s already so good), but with updated photos and text.

Try it, and no matter where in the world you are, I guarantee you’ll love it.

How to make the most delicious Pav Bhaji:

How do I serve the Pav Bhaji?

I’m glad you asked, because there’s a definite way to do this. 😉

Once you have the pav and bhaji cooked, slit the pav down the middle, leaving it joined at the spine if possible, like an open book. Then toast it, cut side down, on a screaming-hot skillet with some melting hot vegan butter and pav bhaji masala or paprika until golden spots appear.

The bhaji has to be served hot, topped with a pat of vegan butter that complements the spicy-tangy-salty veggies perfectly. Swirl the butter around the bhaji, mix in some chopped onions and chopped coriander, and squeeze in a few drops of lime.Now you’re ready to eat.

Tear off a piece of the soft pav and dunk it into the bhaji and then into your mouth. No spoons and forks and knives here, folks. You can wash your hands before and after you eat. Even Desi, who can barely eat a chapati without a knife and fork, uses his fingers for Pav Bhaji. There just is no other way to enjoy it.

Finally, no Bombay street food is complete without a cup of chai, so pour yourself some vegan cutting chai to wash down the pav bhaji.

Nut-free | Soy-free | Can be Gluten-Free 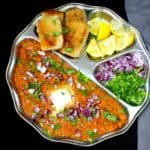 Pav Bhaji is the ultimate street food from Mumbai. It's a mad mash of potatoes, tomatoes, onions, cauliflower, green peppers, green peas and spices, and you scoop it up with an airy, soft pav — a bread roll. It's also a remarkably easy dish to make, and it comes together in minutes. You can make it gluten-free by using gf bread rolls. A vegan, soy-free and nut-free recipe.
Prep Time20 mins
Cook Time30 mins
Total Time50 mins
Course: Snack
Cuisine: Can be Gluten-Free, Indian, Indian Vegan, nut-free, Soy-free, Vegetarian
Servings: 6 servings (2 pavs each)
Calories: 404kcal
Author: Vaishali · Holy Cow! Vegan Recipes