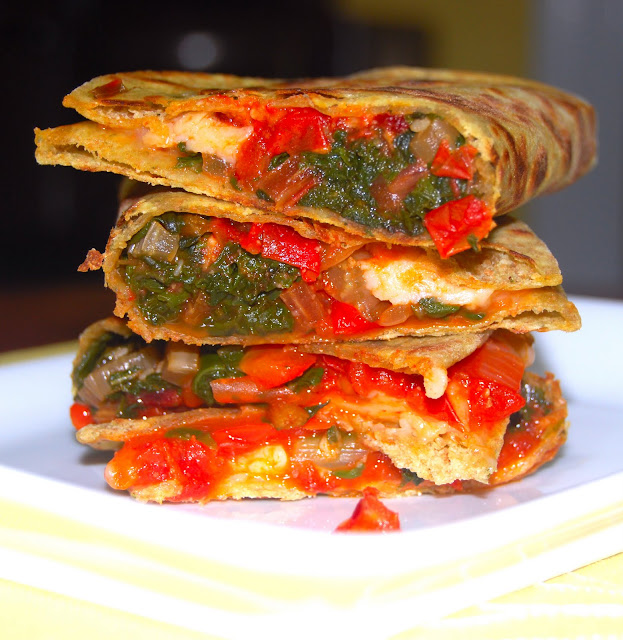 Desi loves nothing more than a nap on Saturday afternoons. So while he's communing with the z's, I curl up on the couch with a cup of tea and whatever's cooking on public television. One of my favorite shows  is Rick Bayless's Mexico: One Plate at a Time.

Mexican food is very vegan-friendly, notwithstanding appearances, and as I watch this show-- and any other-- my mind is constantly thinking of ways to swap out the meat for something delicious and plant-based. Recently, as I watched Bayless rave about quesadillas made with wheat tortillas and how pork fat added to the dough makes the most "savory quesadillas imaginable," I couldn't stop thinking, there has to be something to rival that-- no, better that-- in the plant world.

The answer was already in my kitchen, and even better, it was perhaps more Mexican than pork fat-- avocado.

The buttery Avocado makes a perfect substitute for fat in breads. Some of you have already tried my Avocado Brioche, one of the early recipes to feature here on Holy Cow!, where the avocados stand in  for the butter to create a flaky, buttery, butterless brioche. But the fat in avocados, unlike animal fats, is incredibly heart healthy. Avocados also contain multiple vitamins, potassium and folate. And just as you begin to think that they can't get any more virtuous, they go and surprise you by being one of the most delicious foods you will ever eat. Try and beat that, pork fat!

To make my quesadillas truly savory and bursting with sunny Mexican flavor, I pureed up the avocados with some mint and a jalapeno pepper before mixing them in with the dough. The result was flaky and crispy and supremely delicious. And the fun didn't stop there. I made some tomato chutney spiked with the fire of chipotle peppers and stir-fried some rainbow chard and red peppers to stuff into my quesadillas. To hold it all together, I topped off the fillings with some grated vegan queso. Yum.

One tip on grating the vegan mozarella: freeze the cheese for at least an hour before you attempt to grate it-- it grates perfectly and melts easily when added to the quesadilla. You could, of course, leave out the cheese and still have an impossibly delicious quesadilla. 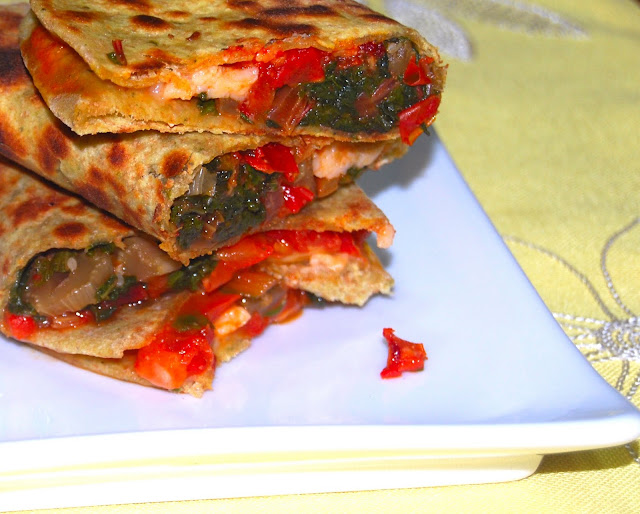 1 cup all-purpose flour (this is important if you want a flaky, crispy tortilla. An all-wheat tortilla will be tasty but will be soft and not quesadilla-like)

Place the flours and salt in a bowl.

In a blender, process the avocado, mint and jalapeno until you have a fairly fine paste. Use water if needed to keep the blender blades running.

Make a well in the flour and pour in the avocado puree. Knead it in with your fingers. Add more water if needed to get a smooth dough. Place in an airtight box and set aside at least half an hour. (Instructions on how to roll the quesadillas follow)

Chipotle is a very Mexican flavor, and here I used it to give an Indian-style tomato chutney a uniquely Mexican avatar.

1 chipotle chili in adobo sauce, with 1 tsp of the liquid. Chop the chili really fine. (If you are sensitive to too much heat, cut this down by half or less)

Spray a skillet with oil. Add the onions and the sugar and saute until they start to soften and brown spots appear.

Add the tomatoes and the chipotle chili and sauce. Stir well and cook over medium-high heat, stirring frequently, until the juice from the tomatoes has evaporated. You don't want a soggy quesadilla, so it is important there is no visible liquid in your chutney.

Turn off the heat and add the chopped cilantro.

Spray a skillet with oil. Add the sesame seeds and stir. When they turn a shade darker, add the garlic and toss together for a few seconds.

Add the swiss chard and stir until it begins to reduce.

Add the red bell peppers. Cook, stirring frequently, until the peppers are tender enough but are still bright red and have a bite to them. 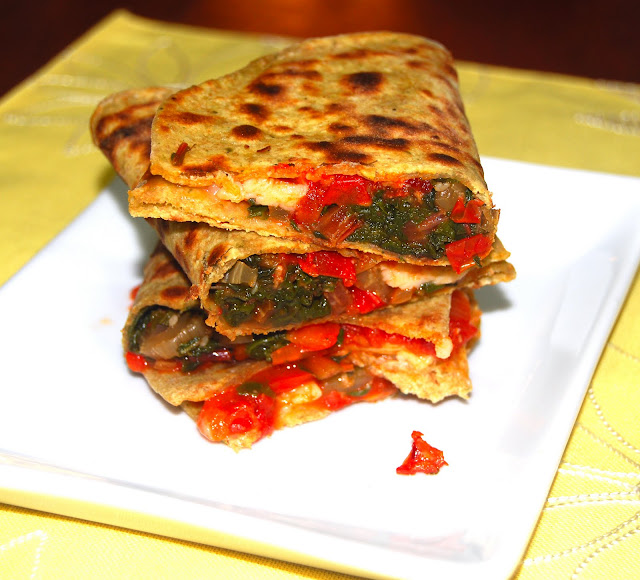 To assemble the quesadilla:

Heat a nonstick or cast-iron griddle and spray with some oil.

Divide the avocado tortilla dough into 10 equal pieces and shape each into a smooth ball.

Using a rolling pin, roll out each ball into a tortilla, about 7 inches in diameter.

Place the tortilla on the hot skillet. When bubbles appear, turn over and cook until golden-brown spots appear on the underside.

Flip over again. Place some chard and then some chutney just off the center. Top with some vegan cheese, like vegan mozzarella, if you like.

Flip one half of the quesadilla over the top of the filling and press down with your spatula. Take off the griddle after about 30 seconds.

Cut the quesadilla into halves, or serve as is rightaway.