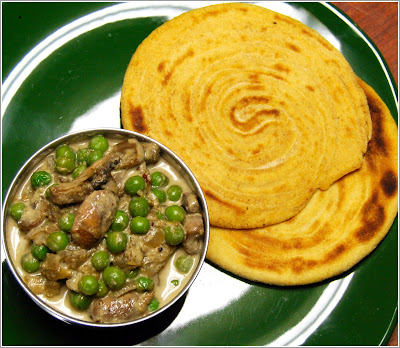 My husband Desi and I, it seems, have always been polar opposites when it comes to our food choices.

He grew up in Madras, in a pure vegetarian home where his mother would have probably thrown a fit if any animal body part happened to come anywhere within a two-mile radius. He didn't eat meat until he was in his 20s.

I, on the other hand, grew up in a flat in a crowded suburb of Bombay where the smells of all sorts of foodstuffs cooking in every kitchen in the building, animal or not, suffused the air. At home, my Goan stepmom cooked fish almost every day, and my dad made his special mutton curry each weekend (find the vegan version here--my dad's not mutton mushroom curry)

Ironically, I am a vegan now while Desi eats meat, although only occasionally when he eats out. I suspect that at heart he is still a vegetarian because how can a good habit learned so early just vanish? 🙂

One of the foods Desi didn't eat in his childhood home, because he says his mom -- albeit a fabulous cook-- never made it since it usually accompanies meat dishes, was a flaky, layered South Indian flatbread called Parotta. As a young man, he'd often eat it at restaurants. Needless to say, he developed quite a yen for this bread.

Parotta is quite different from the North Indian paratha which is often stuffed and then rolled in a straightforward fashion. Parotta, on the other hand, requires a more elaborate process of rolling up and rolling out that gives it its unique texture.

Traditionally, parotta is made with maida, a super-refined wheat flour available in Indian stores. All-purpose can be substituted, although it doesn't come close to being as superfine and starchy as maida is, which compromises the texture of the parotta.

I don't usually keep maida around because it really isn't a nutritionally sound food. So I did use some all-purpose flour to make my parotta but I went a step ahead and substituted half the all-purpose flour with whole-wheat flour. I also used much less oil and fat than parottas usually contain.

The parotta turned out quite well-- I admit it wasn't as crisp as the one that using maida and tons of ghee would have produced, but it was flaky and quite delicious. Plus, it was tons healthier.

To go with the parotta, I made a spicy Mushroom-Peas Korma that also uses south Indian-style spices.

All in all, this made a healthy, wonderful meal for a Sunday night. A great way to end the weekend.

Mix the ingredients in a large bowl and then, using enough water, knead into a smooth but not sticky dough. Set aside for at least half an hour.

Divide the dough into five balls. Roll out one ball to a diameter of 8 inches.

Brush with oil. Then roll out another ball to the same size and stack it on top of the first layer. Brush again with oil and repeat until you have stacked all five layers.

Spread the top layer with some more oil.

Now carefully roll the stacked layers into a tight cylinder and press the seams together at the end.

Cut along the length of the cylinder into seven equal sized pieces.

Now place one of the pieces flat on a lightly floured surface so the layers are showing on top. Roll each piece into a six-inch parotta.

Brush a cast-iron or non-stick skillet lightly with oil.

When hot, place one parotta on the skillet. Cook until light brown spots appear, then flip over and cook the other side until golden spots appear. Brush with more oil if desired.

These are best served fresh and hot, straight from the skillet. 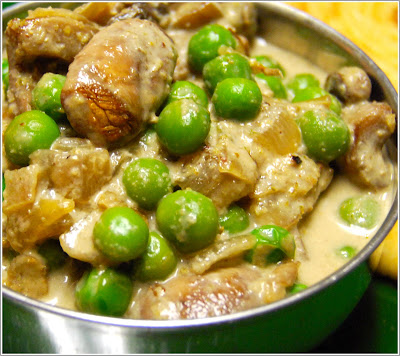 1 8-oz package of crimini mushrooms (can use button or even shiitake), sliced

For the masala, grind together:

In a saucepan, heat the oil

Add the cinnamon, cloves and powdered cardamom and stir for a few seconds until fragrant.

Add the onions and saute until brown spots appear.

Add the mushrooms and stir until they soften, about 3-4 minutes.

Add the ground masala and stir well. Cook for about 3 minutes before adding ½ to 1 cup of water, depending on how runny you want your gravy to be.

Add the peas and salt.

Cook until the peas and mushrooms are tender, about five more minutes.