I dreamed up this stir-fry veggie sambar for fun, as I wrote this story for the Chalks and Chopsticks event, which combines food with fiction, about four roommates at an American university looking to find the flavors of home armed with a very limited knowledge of cooking. But if you do try it, it actually tastes quite good.

The Roommates liked to eat-- Indian food, exactly as mom had made it-- and that's why they decided it was time they learned how to cook. It was their first semester at grad school and they had more time than they could gossip, hang out, and study, in that order. They had delicious memories of the foods of home (which they were dying to eat again). And they had just sprung $10 for a slightly worn set of pots and pans from a Panamanian student in the apartment building who was moving back home. He had also thrown in a knife and some ladles. And a futon, if they agreed to carry it out so he could get his deposit back from the landlord.

The kitchen was new territory for the Roommates, in many different ways. Back home in India food had always been served up to them on a platter by mom, or their sisters, or grandmom, or an aunt. They did not even have to pick up the dirty plates and wash them, because someone else -- a woman -- would do it for them.

And then their kitchen here in the United States was so different. For one it looked too stark, too clean. There were no piles of just-washed vegetables dripping water on soapstone platforms, waiting to be cut before being added to sizzling kadhais sputtering with mustard seeds. No open shelves stacked with shiny, hand-scrubbed steel plates and steel tumblers. No large, round aluminum tins of rice and flour and lentils stacked on the floor, against the walls.

No mom, her hair pulled back into a bun, sweat beading her forehead, her sari tucked in at the waist, cooking up a magnificent meal.

This kitchen of the two-bedroom apartment the four Roommates had rented had pale wood cabinets, laminate countertops and a four-burner stove with an oven and coiled electric grills. The Roommates had never operated an electric stove before they moved here, or, for that matter, the gas stoves in their mom's kitchens. The only electric stoves they had ever seen were those single-burner hotplates people in India had sometimes used when the gas cylinder had run out and a new one was yet to be delivered. The hotplates usually burned the food, and sometimes whole houses.

One of the Roommates remembered how he had burned an egg as he tried to fry it on a hotplate he had smuggled into his college hostel back in Chennai. He didn't know he was supposed to oil the pan first.

"It was a little burnt-- but it tasted just great!."

Although none of the four Roommates had ever really cooked before, they weren't particularly nervous about this maiden venture. Each basked in the comfort of shared ignorance--after all, it wasn't as if anyone else in the room knew what he was doing, or was supposed to do.

The Roommate who had burnt the egg was put in charge of the actual cooking, since he was the most experienced. The others divvied up chores among themselves: one would run errands, the other would help prep and fetch anything that needed to be prepped and fetched, and the third would do all the washing-up afterwards, which meant he got to relax and watch an illegally uploaded Bollywood movie on his laptop while the others slogged in the kitchen.

"Okay, so what pan should we use?"

Four pairs of eyes scrutinized the four pans. Black inside, shiny green on the outside. Cooker Roommate tentatively picked up the tallest, and rightaway Washer Roommate smacked his hand down.

"We aren't cooking for an army, you know!"

"But mom always cooked sambar in the narrow-mouthed pans. The others are too wide."

After a lot of debate, the Roommates decided to settle on one of the wide saucepans. It seemed deep enough to hold the sambar, but small enough not to feed an army.

Next were the lentils, because everyone knew sambar was made with lentils, even the Roommates.

"Why do these look pink?"

"Aren't they supposed to be?" asked Errand Roommate who had already made three trips to the grocery store in preparation for this project, once to get the lentils, another to get the salt, and a third to get vegetables. The grocery store was almost a mile away and his legs were getting sore.

"No, you idiot, lentils are supposed to be yellow. Everyone knows that."

"I didn't see any yellow lentils. The pink was all they had."

"Well, what difference can it make?"

The lentils went into the pot, followed by some water.

"How much do I need?" Cooker Roommate who was pouring the water from a glass asked, wide-eyed. Helper Roommate peered into the pot.

"Why don't you just turn on the stove and let's see how it goes."

It was hard to know if the stove was heating up because they couldn't see any flames, but an acrid smell soon told the Roommates that not only was it heating up, it was burning something.

In went more water, and then some more, and after about half an hour the dal finally began to turn soft.Next to go into the pot was the sambar masala that Errand Roommate had brought with him all the way from Chennai. He had grumbled when his mother placed in his suitcase the huge plastic bag bulging with the fragrant orange-yellow powder she had lovingly made for him the week before he was scheduled to fly abroad to get his master's in computer science. She knew she might not see him for at least two more years.

It was her tearful eyes rather than any conviction that he would use the sambar powder that made him agree to tote it across continents and past the sharp eye of the U.S. customs officials. Now he was a little proud of it as he handed it to the other Roommates. His mom's sambar had been legendary.

"How much of this should I add?" Cooker Roommate picked up a large, round-bottomed ladle because they had no spoon or cup measures-- didn't even know what they were.

"Maybe you should start with one, and we can add more if it's not spicy enough?" Errand Roommate was not sure his mom had meant for it to be used up in one cooking session.

In went a heaping ladleful of sambar powder. Cooker Roommate stirred it vigorously, trying to break the lumps that immediately formed in the bubbling dal and not quite succeeding.

He put a spoon in the sambar and tasted it, then made a face. "Oh my god, it's too spicy!"

"Oh come on, it cannot be too spicy. How's it otherwise?"

Helper Roommate handed him the salt, but not before he had had a brainwave.

"Wait, sambar has vegetables in it, doesn't it?"

Errand Roommate threw up his hands. "Of course. What do you think I bought all those veggies for?"

He pointed to a white plastic tray lying in a corner of the kitchen platform. It was another stellar find from the apartment building trash dump that had already yielded a dining table, a bookshelf, and an entire encyclopedia set from 1978. Into the tray was stuffed an odd assortment of lemons, a grapefruit, and a couple of okra.

"Aha, I've been looking for my laptop charger!" Helper Roommate said, grabbing at a mass of wires and adaptors tangled around the vegetables and fruit.

Cooker Roommate picked up one of the slender green fingers. "What were you thinking?" he shook his head at Errand Roommate.

"I love it too, but how on earth is one supposed to cook this?"

"How should I know? You're the cook."

Cooker Roommate turned to Helper Roommate. "Do you know how to prep this?"

"Then go check if the girls have some cut-up veggies."

The "girls" were three women students from India who were also renting an apartment in the same building, and with whom the Roommates had struck up a deep and instant friendship that they hoped would blossom into more.

When Helper Roommate came back, he held up a frozen bag. "This is all they had." It was a bag of stir-fry vegetables: mushrooms, broccoli, celery, carrots, and water chestnuts.

"I've never seen a sambar made with mushrooms-- or celery. And what on earth are water chestnuts?"

"Well, they are vegetables, aren't they? That's good enough!"

Cooker Roommate grabbed it from his hand and emptied the package into the bubbling sambar.

"It smells great! I think it needs more salt."

"Oh, and don't forget the lemon-- a good sambar needs some tang."

"Shouldn't we have made some rice?"

The Roommates gathered around the dining table. Sizzling sambar was generously drizzled over slightly-hard-from-the-refrigerator rice leftover from the Chinese food they had ordered yesterday. The Roommates dug in with their fingers, just as they had back home. Everyone was silent for a good two minutes as they chewed over celery, broccoli, water chestnuts, and mushrooms, and tried to find the flavors of home.

"How is it?" asked Cooker Roommate, eager to know the result of all that pouring, mixing, sizzling, and stirring.

Three pairs of eyes looked up at him.

"But it tastes just great," all four roared together.

The Roommates are based loosely on memories of students I met after first moving to the United States to go to grad school. For many Indian students-- and there is a significant number of these in universities around the world and particularly here in the United States-- food is perhaps the most difficult in a plethora of adjustments they are forced to make when they choose to live abroad. While the new foods of their new home are fun for a while, it is not too long after that these creatures, who are usually stepping away from the comfort of mom and dad's home for the first time, start pining for the familiar.

The adjustment is, of course, hardest for Indian men who have never usually cooked back home or even helped in the kitchen. My story was inspired by an episode Desi narrated to me, from a time he and his roommates tried to cook sambar and ended up with a mighty strange version of it, mushrooms and all.

Strange though a stir-fry veggie sambar might sound, I decided to take a stab at it. And the Roommates might have been on to something-- celery, broccoli, mushrooms and water chestnuts do taste pretty good in a sambar, especially when the sambar powder comes from back home (mine came from my sis-in-law Paddu).

Who knew? Thanks, Jaya and Aqua, for hosting this fun event. 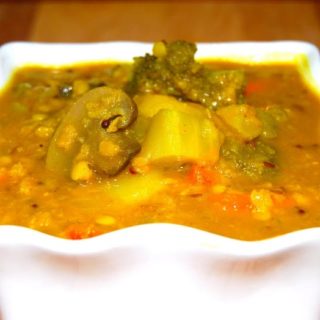 Opie got a haircut for the summer, and everyone in the neighborhood wants to know if we got a new puppy. I miss all that gorgeous silky golden hair to bury my face in, but how cute is this?