In my memory, a Prawn Patia will forever be the dish that made me sick as a dog the first time I ate it. And yet, I fell in love with it.

The sickness I chalked down to the prawns, which are small shrimp and, like many varieties of shellfish, notorious for causing stomach upsets. And to the possibility that hygiene at the hole-in-the-wall restaurant may have been short of stellar.

And the love? Well, it was impossible not to adore a coconut curry that's a tango of salty, sweet, tangy and spicy.

I learned how to make a prawn patia just as delicious, and after becoming vegan, I morphed it, effortlessly I think, into a Tofu Patia, where chewy chunks of tofu stand in for the shrimp.

My Tofu Patia recipe has lived on this blog for 12 years now, and so many of you have made it and loved it, so I wanted to bring it back to the top for anyone who's new to the blog, with new photos.

The Parsis-- who are said to have migrated to India from Persia 1,000 years ago-- are also among its most interesting residents. They are often described in cliches: super-rich, inscrutable, tight-knit, eccentric…there's some truth in all of that. Over the years I have met and made many wonderful Parsi friends, but my memory is dominated by a willowy, green-eyed, brown-haired friend named Lyla who once went to a really seedy strip club in South Bombay because, she said, how else would she know what goes on in there? For company, she took her aging mother and aunt.

The next day she related, deadpan, a colorful account of the dancers, exactly what they did, the audience, and their reaction.

Parsi cuisine is just as delightful, and extremely delicious, but it is not something I've ever seen in Indian restaurants here, partly because the restaurants here are predominantly run by North Indians, and in some cases South Indians, who largely serve cuisine from their part of the country.

But Indian regional cuisine varies greatly from state to state and sometimes even within different communities in a single state. Parsis first settled in Gujarat, a state in west India, and their food is an amalgamation of Gujarati cuisine and their Persian roots.

Like other dishes served by Parsis, Patia sparkles with vibrant flavors. There's the sour note added by tomatoes and lemon, the sweetness of coconut milk and jaggery (an unrefined Indian sugar), and the spiciness of red chilli powder.

Given all these rich flavors, I was pretty certain that I wouldn't miss the prawns in a vegan version. But because I wanted to throw in some protein muscle, I added some marinated, baked tofu.

I was really thrilled with the result. My vegan patia had the same flavors as the seafood version (minus the fishy smell-- now who would miss that?), and the tofu, baked to slight chewiness but creamy in the center, was just perfect.

I can't wait to share it with you. Enjoy, folks! 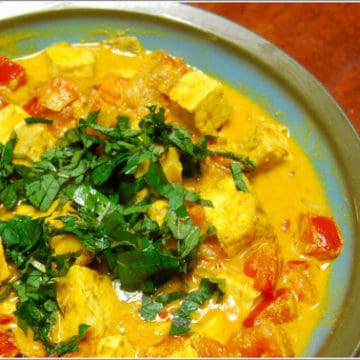 For other meat-free favorites, check out my vegan Vegan "Beef" Stew, and my "My Dad's Not-Mutton Mushroom Curry.