This recipe for a South Indian style Super Crispy Potato Vada is from my sister-in-law, Vaidehi Manni.

Madras is a bursting, flourishing metropolis in the south Indian state of Tamil Nadu that remains, to this day, firmly rooted in age-old culture and tradition.

This is where Desi was born and where he grew up before moving to Bombay for a job. Some of his siblings still live there, so it is always a stop on our return trips to India.

My ideas about Madras, or Chennai as it is now called, began to take shape long before I met Desi. As a child growing up in Bombay, I learned of the city through the stories and anecdotes that my best friend and neighbor, Radha, brought back with her after each summer vacation spent visiting relatives there. Radha painted a fascinating land: of arid, acrid summers where some people walked miles to find water; a megalopolis suffused with small-town charm, where neighbors strolled in and out of open doors any time of the day and night and where women gathered in the verandahs of their single-storey homes after the day's cooking was done to share news of their small but lively worlds.

A city so orthodox that, she told me once, deadpan, a crowd gathered to watch her each time she stepped out of the house wearing pants (saris and salwar-kameezes are de rigueur for women here).I visited Madras years later for the first time, to visit Desi's family. The city felt familiar, already, but with many pleasant surprises. The startling blue of the ocean at Marina Beach dazzled this Bombay girl used to the murky-brown of the Arabian Sea that hugs India's west coast. Mount Road raged, traffic gushing non-stop through its noisy artery. In T-Nagar, the city's shopping hub, stores bustled with housewives sharply scrutinizing everything from steel coconut scrapers to dazzling silk saris bordered with silver and gold threads to expensive, diamond-studded jewelry at the ostentatious Thanga Maligai store.

I loved everything about the city. Even getting on one of the green Pallavan buses with left-side seats reserved for women and driving over Beach road and the white, curved bridge that swept over the Coovum river was a tiny thrill.

Tamilians are nothing if not religious, and the city is packed with temples like the Kapaleeshwar temple in Mylapore with its intricate, jewel-hued gopuram, historic churches like the Santhome Cathedral on Marina Beach, and the twinkling Thousand Lights mosque on Mount Road.

My favorite landscapes, though, were the semirural ones. Quiet (then) suburbs like Chromepet, where Desi's parents lived. Their home was a flat, single-storied building topped with a terrace and fronted by a wide verandah where his father would spend a good deal of time chatting with and waving to neighbors as they strolled by. Behind the house was a well that, he told me, had never run dry, even in the harshest summers. The yard was dotted with mango and coconut trees and closer to the house Desi's mom, Amma, had planted all sorts of vegetables.

Over my many trips back to Madras, I've watched with some sadness as it has changed, just like the rest of India. The prosperity that has suffused the country's middle class has sprawled here too, perhaps more rapidly than it has any other place. Distant suburbs, once brown, dusty spreads of land, are now packed street to street with single-family homes. The nearer suburbs, once lined with single-family homes, are now filled with taller buildings bustling with families. Bright new cars and two-wheelers roar on narrow neighborhood roads not quite ready to be driven on.

Desi's parents have passed on and their beautiful home has been replaced by an apartment building.

The road from the airport is fringed by expensive hotel chains to accommodate foreign travelers drawn by business to this high-tech hub, and, sometimes, prodigal children visiting from recently-set-up homes far far away. Madras, with more engineering colleges than any other city in India, ships out thousands of software engineers to countries like the United States each year.

But underneath all these nouveau trappings, the city holds rigidly on to a culture shaped by centuries of tradition. And, it's true, women usually don't wear the pants, if you know what I mean.

A few years back, traveling around Madras on a work assignment to explore the reasons behind why India produces so many engineers and doctors compared to the United States, I interviewed families and students in the city. While more and more women were becoming engineers and going out of their homes to work, some things remained unchanged: most are found husbands for and married off as soon as they've stepped into their early 20s. And while some continue to bring in the bread and butter it, they are also expected to return to more traditional roles in their families the minute they stepped in through their homes' thresholds.

This past week, Desi's brother and sister-in-law, both natives of Madras who've lived in Sydney for the past two decades and raised their children there, were visiting with us. To me, every visit from my Tamil relatives is a great opportunity to learn more about the foods of their native land. Vaidehi manni, my sister-in-law, made for us this incredibly delicious for a super crispy potato vada that I am sharing today.

In the part of the world I come from, a potato vada is a ball of cooked potato mixed with spices, dipped in a chickpea batter, and deep-fried. This potato vada was differently delicious. Incredibly crunchy, it has a melt-in-your-mouth texture that makes you forget, for at least as long as you're eating it, that it probably has a bazillion calories in it.

But what the heck-- everyone deserves some indulgence once in a while, don't they?

Here's the recipe, then. Enjoy, all! 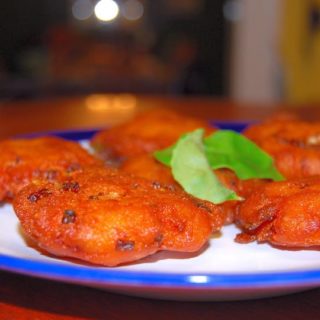