Vegan Cutting Chai is a tasty way to enjoy the flavor of Bombay in the comfort of your own home. This sweet, spicy beverage defies all common sense about how to make tea, but it’s the most delicious drink ever. 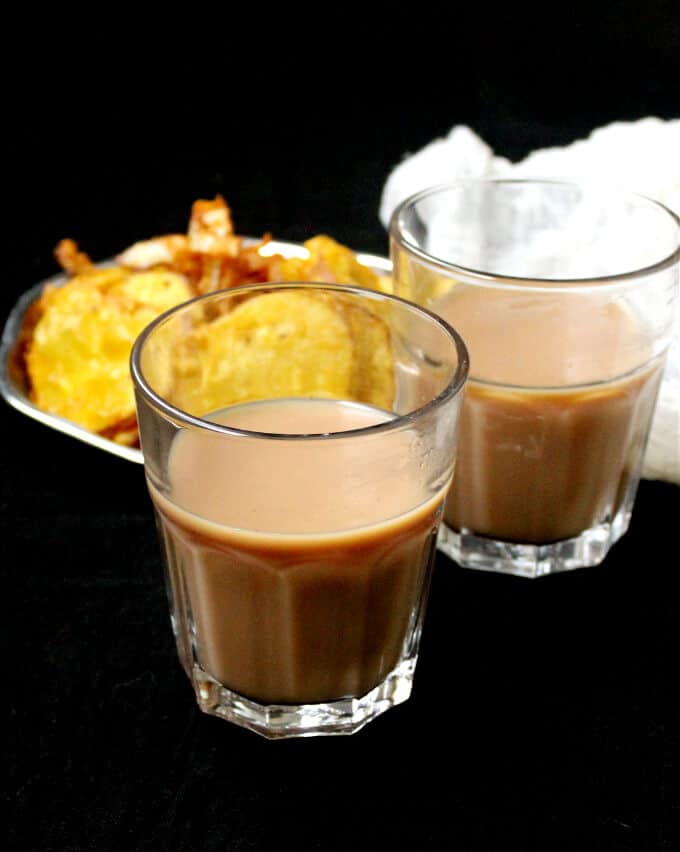 Cutting Chai is an integral chapter in the story of Bombay street food — the drink you use to wash down those hot, spicy, deep-fried street snacks like vada pav, or pav bhaji, or samosas. This is not a Chai Latte or whatever wimpy version of tea flavored with spices you might be used to here in the West. Cutting Chai is as badass as it gets. It’s a thick, milky, too sweet, too hot, gorgeous mess that could not have originated anywhere but within the belly of this thick, too hot, too noisy, and gorgeous city.

For decades, chai has been sold by vendors who line Bombay’s sidewalks (footpaths), usually in busy working or shopping areas, to keep the city buzzing and ticking. It’s the drink you catch up with old friends over, the drink you share with your smoking buddy to tamp down the first, acrid puff of a cigarette, the drink you glug down before an important test or in the middle of a busy work day to keep your brain working at top speed. 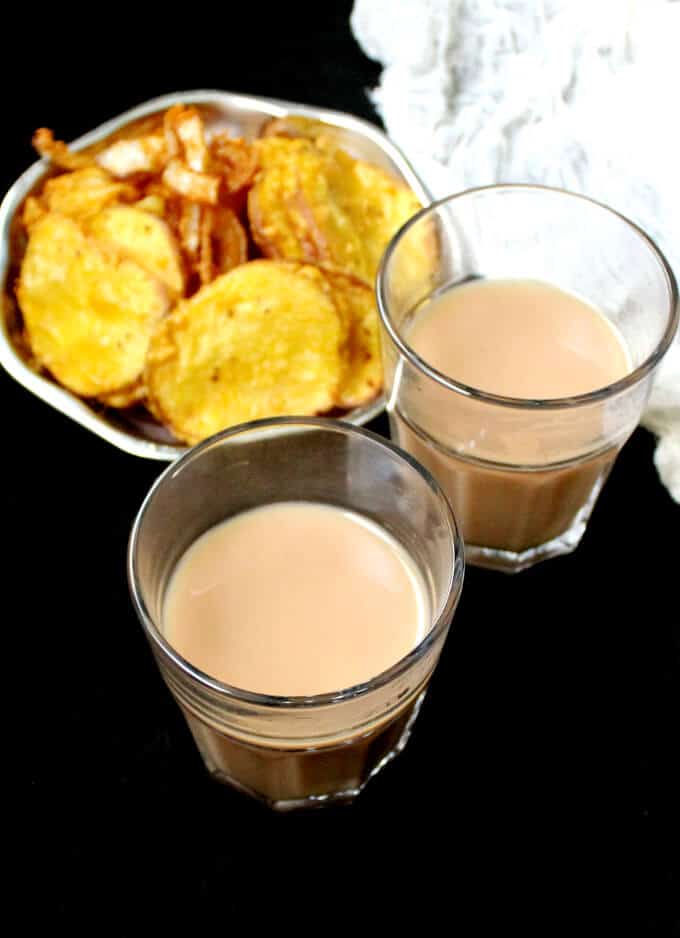 To understand what cutting chai is, or where it gets its strange name, you have to imagine the street lingo of Bombay: a bastardization of Marathi, the language spoken by the city’s natives, Hindi, the language that binds together people from around India who make Bombay their home, and English, a language most of middle class India conducts official business in. If you’ve watched a Bollywood movie with an unshaven “hero” who’s followed everywhere by a couple of unshaven lackeys, you’ve probably heard it, even if you couldn’t tell the difference.

The word “cutting” comes, of course, from English, and the source of its use here goes to the essentially frugal nature of Indians. If you are not Indian and don’t already know this, we Indians (and Indian-born) are naturally excellent at stretching a rupee or a dollar, no matter the hardships we have to endure in the process.

Picture two Indians at a tea stall (why go to a restaurant and pay ten times more for two cups of chai, just because they put in a door and an air-conditioner unit?). They’d likely stand or sit on one of the rickety wooden benches right by the dust-smothered road, car horns blaring in their ears, pedestrians almost knocking them over, sweat running down their faces in little rivulets, all the time keeping up a fluid, animated conversation. When the waiter, a young boy who also serves as an assistant and gofer for the adult who’s actually making the tea, wanders by, one or both would yell at him: “Ek cutting chai laa re!” (Hey, one cutting chai!).

Niceties like “thank you” and “please” are never uttered — nor expected — in Bombay, especially on the streets. 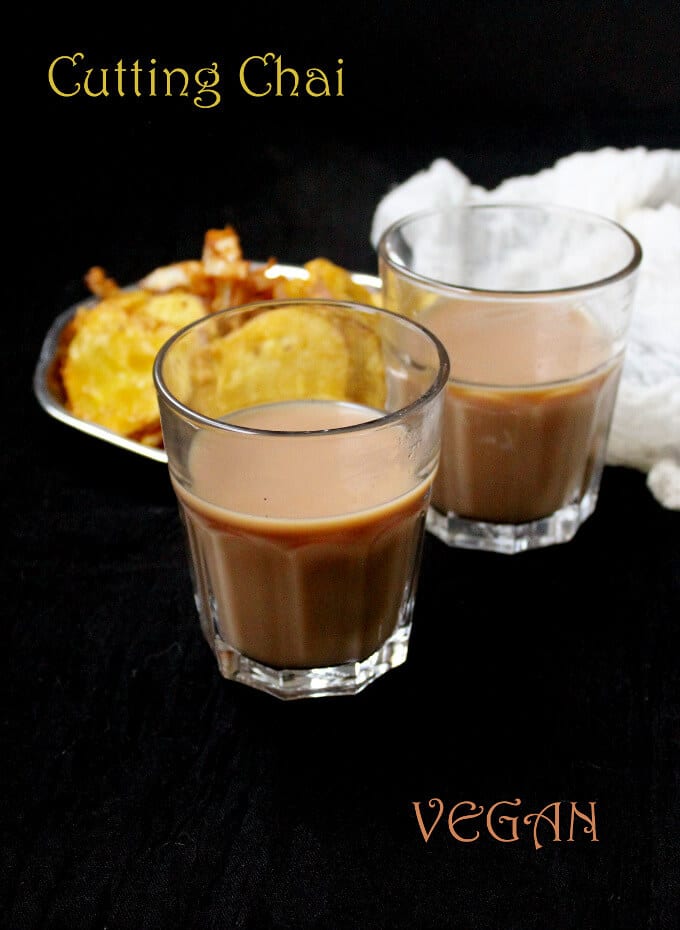 The popularity of chai in Bombay might make you wonder why the people of a city, where temperatures regularly swim upwards of a hundred degrees, would be addicted to a beverage that requires an asbestos tongue to drink. And yes, it sounds counterintuitive and rather silly. But science shows that drinking hot beverages in hot weather actually cools you off, because when your tongue’s receptors sense the heat, your brain asks your body to sweat more, which in turn cools you down. See? The chaiwallas and chai drinkers of India have known that for decades, way before the researchers did.

If you are a tea drinker looking to brew yourself some cutting chai this summer, you first have to set aside everything you know about how to make tea. There are no cute li’l teapots here, or kettles, or whatever it is you use to make your fancy-pants tea and then sip it daintily out of a tea cup.

You’re not supposed to let tea leaves ever boil in the water, right? Wrong. You have to let the tea boil away like crazy. Along with the milk and the sugar. And there are no tea bags, mind you. You just dunk the tea leaves into the water in heaping spoonfuls, and it doesn’t have to be an elegant tea with a pedigree from the slopes of Darjeeling. In fact, the legend goes that chai is made so sweet and so milky to mask the rather inferior quality of the tea, but who cares when it all tastes so good at the end. Besides, yaar, it’s street food — it’s meant to be chaalu.

If you’re someone who likes to drink your tea black or if you like your milk, dairy or not, on the side, you’ve got it all wrong. Milk is not optional here, and neither is the sugar. You need both, and tons of it. Remember, if it’s not too sweet, too milky and too hot, it just isn’t chai.

The color of the resulting brew is somewhat like the muddy water that pools on Bombay’s streets during the monsoons. If you are on the streets of Bombay (lucky you), the glasses have probably been washed by getting dunked into the same bucket of water that has already been dunked with 100 other dirty glasses today. But the tea is delicious. Oh, so delicious. 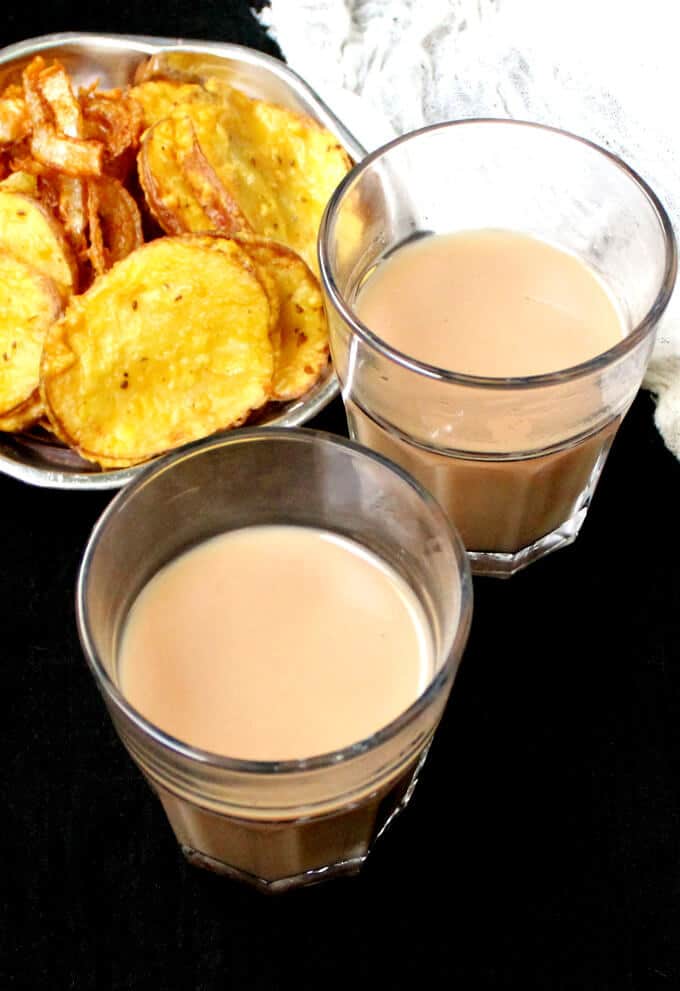 There are a few other things to remember when you make or order a cutting chai. Grab the glass by the rim or else your fingers will burn to a stub. Drink the tea while it’s as hot as you can handle it because there’s nothing as pathetic as a glass of cold chai. And whatever you do, don’t call this a “chai tea”. Chai is tea in Hindi, so that is like calling a potato a “potato potato”. Cute when a three-year-old says it, but silly when an adult does, see? And I don’t care if Starbucks thinks it’s right. It just isn’t.

I haven’t had cutting chai on the streets of Bombay in 20 years because nursing a Delhi belly during our usually hectic travel schedule when we visit India is not an option (Desi got a nasty bout of gastroenteritis once after drinking chai at a railway tea stall), and, of course, the chai made by India’s street vendors is also not vegan. But making a vegan version of a Cutting Chai at home is not difficult at all.

You do need a thick milk for this, so most nut milks will not work. I like using vanilla soymilk which is thick enough for a decent cup of Cutting Chai, although you cannot let the milk come to a rolling boil the way you would if using dairy milk because the soy milk will separate. If you can’t use soy for any reason, you could try a coconut creamer — some brands I’ve tried do not have a pronounced coconut flavor, and that’s important because coconut and chai will not mix.

You do need to serve cutting chai in little glass tumblers, or it’s not the same. These cute little ribbed glasses, so like the ones chaiwallahs in Bombay use, are from Ikea and they look pretty authentic although they were probably made in China. But hey, maybe the Indian ones are too.

So get some water boiling, and bring out the tea leaves. If your days are anywhere near as hot as these pre-summer days we’ve been bearing with in the Washington area, you need that cup of vegan Cutting Chai to cool you off. 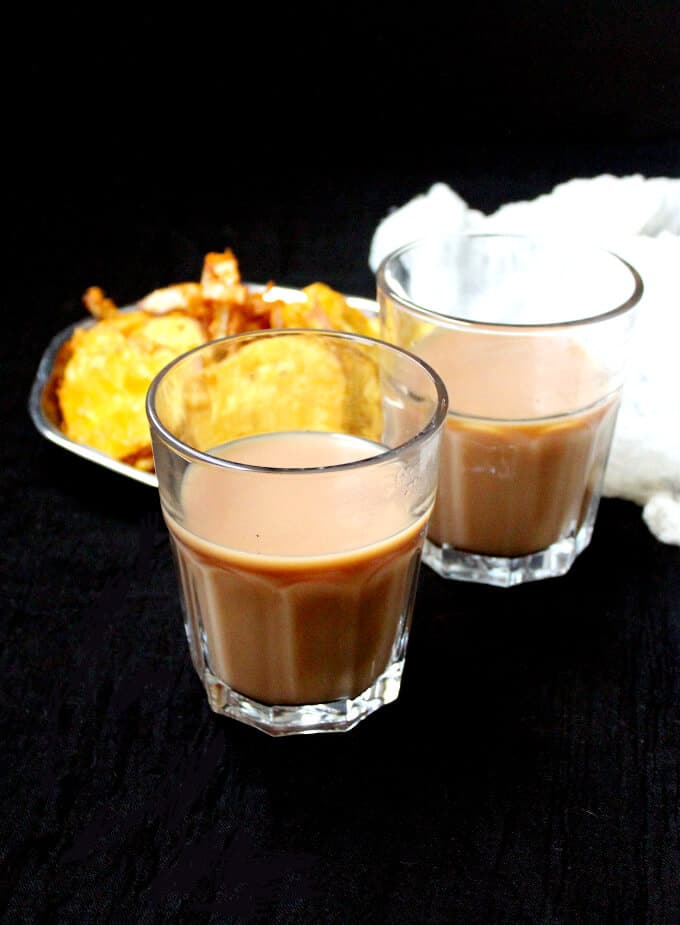 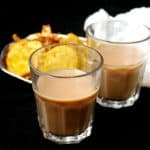 Vegan Cutting Chai is a tasty way to enjoy the flavor of Bombay's street foods in the comfort of your own home. This sweet, spiced beverage defies all common sense about how to make tea, and yet it's probably the most delicious tea you will ever drink.
Prep Time5 mins
Cook Time10 mins
Total Time15 mins
Course: Drinks
Cuisine: gluten-free, Indian, nut-free, Street Food,, Vegan
Servings: 4 servings
Author: Vaishali · Holy Cow! Vegan Recipes

Watch the always wonderful Aamir Khan belt out some Bombay street lingo in this delicious restaurant scene from the movie Rangeela:

What to eat with your Vegan Cutting Chai: 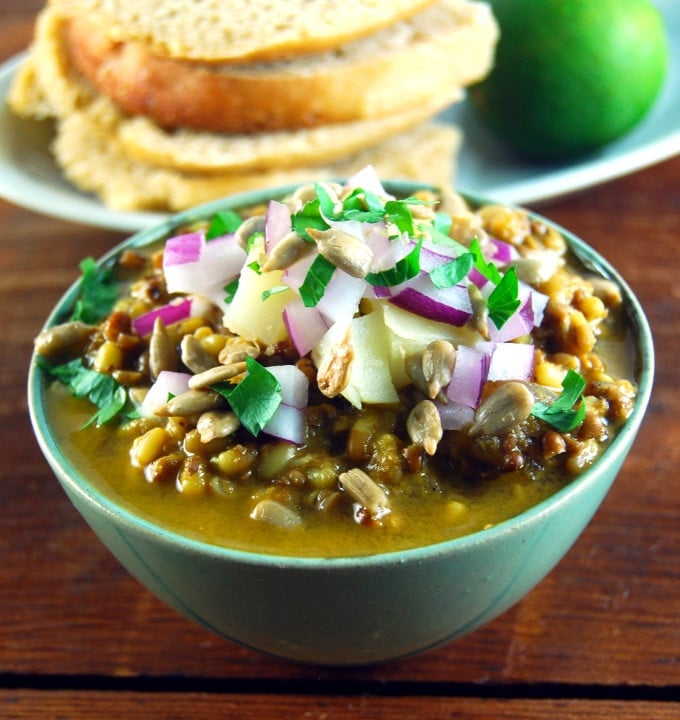 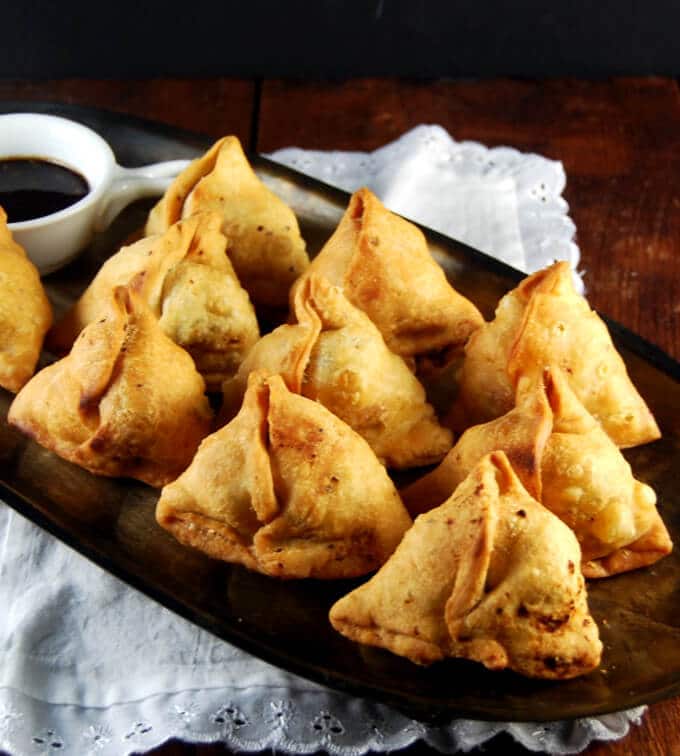 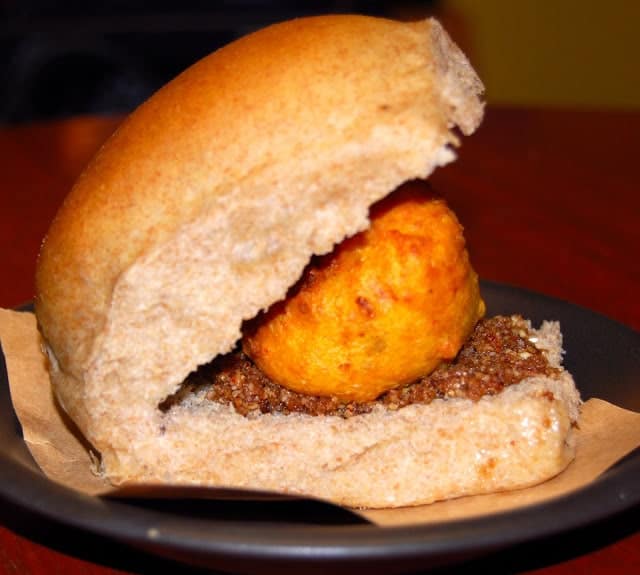 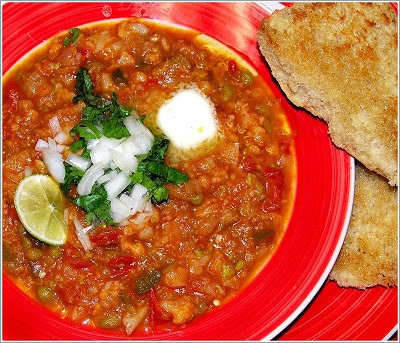