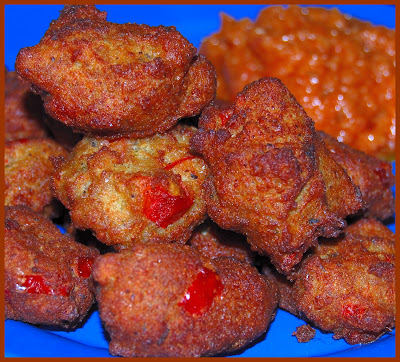 As vibrant and wonderful as African-American food is, I don't cook it all that often in my kitchen. Terry has some really amazing recipes that take off on traditional soul cuisine. And the fact that he makes them vegan in the first place means a meat-free person like me can just go ahead and cook all I want.

I wanted to cook nearly everything I saw in Vegan Soul Kitchen, but the black-eyed pea fritters won me over in an instant.

Terry suggests frying the fritters in coconut oil. In fact, he uses coconut oil quite a bit. It's a trend I've seen among other vegan cooks as well, including the Skinny Bitch in the Kitch authors.

I love the unique flavor of coconut oil and use it sometimes when I make dishes from Kerala, a south Indian state where it's a staple. But I have never used it to deep-fry and don't keep enough on hand for the five cups Terry recommended. So I just went with regular canola oil. I can imagine the coconut oil would give the fritters great flavor, and thought of drizzling some on top, but pouring oil on deep-fried food seemed not just decadent but almost evil, so I refrained.

I also made the hot sauce that Terry uses to accompany his fritters, and it was dazzlingly fiery with the vibrant flavor of habanero. Being a bit of a wimp in the heat department, despite my Indian tastebuds, I left out the cayenne and the white pepper that Terry also adds, but the sauce was delicious without them.

Except for the oil, I followed the instructions carefully. I did have some trouble initially with the fritters falling apart in the oil, so I added a tablespoon or two of chickpea flour which helped them better hold together.

The fritters were delicious and the ones we couldn't eat rightaway I wrapped in a chapati smeared with the red-hot sauce for a brown-bag lunch. Very nice.

I was so impressed with the fritters that the very next day I tried out Roasted Sweet Potatoes with Coconut Milk.

I adjusted the amount of ingredients because I was measuring the potatoes by number and not by weight as Terry suggests, but the final dish was delicious, so I guess I did it right.

The sweet potatoes were perfect, and tasted just as Terry describes them: creamy orange bliss.

Next on my list from this book: Uncle Don's Double Mustard Greens and Roasted Yam Soup, Not-Too-Dirty Rice, and Jamaican Veggie Patties. 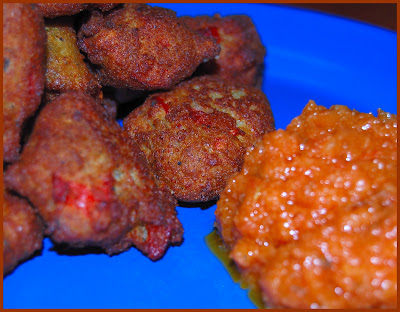 In a food processor, combine the beans, onion, peanuts, thyme, cayenne, vinegar, water and salt and puree until you have a smooth mixture.

Transfer to a bowl, cover and refrigerate for an hour.

Remove the batter and add the chopped bell pepper and cornmeal and beat with a wooden spoon for 2 minutes. (I also added 2 tbsp chickpea flour because the fritters fell apart while frying).

In a saucepan, heat the oil to about 350 degrees. Spoon the batter into the oil, taking care not to overcrowd the pan. Fry, stirring around, until the fritters are golden-brown, about 2 minutes.

Transfer the fritters to a paper-towel-lined plate to drain. If you're not eating them immediately, keep them warm in an oven warmed to 200 degrees.

⅛ tsp cayenne (I omitted this)

In a saucepan, over low heat, warm the oil. Add the onion, cumin, cayenne, and ½ tsp salt and saute until the onions start to caramelize, about 8 minutes.

Stir in the garlic and chili and saute another two minutes (Make sure you have your exhaust on because this can cause some serious coughing). Add the tomato paste, tomato sauce, vinegar and water. Mix well and simmer until it starts to thicken, about 5-7 minutes.

Transfer ingredients to a blender, add pepper if using, and puree to a smooth paste. Add more salt if desired. 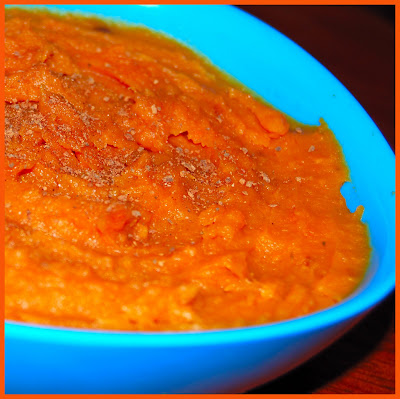 2 tbsp brown rice syrup (Terry suggests agave nectar, but I didn't have any)

Peel and cut the sweet potatoes into a 1-inch dice.

In a bowl combine the sweet potatoes with the brown rice syrup or agave nectar, coconut oil and salt. Toss well.

Spread the potatoes on a baking dish. Terry suggests lining it with parchment paper to avoid sticking, I guess, but I didn't use any and it was okay.

In a preheated 400-degree oven, roast the sweet potatoes for 40 minutes, stirring every 10 minutes.

Remove from the oven and transfer to a food processor. Add coconut milk and process until you have a smooth puree. Add more coconut milk if you'd like a thinner consistency.

I sprinkled some fresh-ground cinnamon on top for an extra punch. Delicious.

Try these recipes from the blog:

***
I will leave you with a picture of my beautiful Opie, whose most favorite thing in the world to do is to play with stuffed toys. Every few weeks Desi and I make a trip to the thrift store to pick up an armload of toys for him. Every night after dinner, Opie will come up to Desi and start scratching him with his paw to beg for a new toy. If Desi doesn't respond, he'll sit next to the cupboard where the toys are and scratch that while looking at one of us with big, appealing eyes.

As you can imagine, we give in pretty fast! 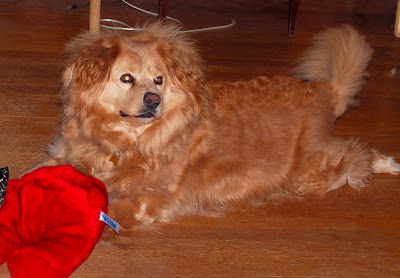