One of my favorite childhood memories is of the days when we would have a pooja at home. The long rituals were quite tedious, especially for a kid, but the fun part was getting together with all my cousins and the amazing vegetarian food one we got to eat at the end of it all. '

The prasad, or offering to the deity, would usually be a sweet and simple but incredibly delicious dish called Sheera. Friends, family and neighbors would visit to pay their respects to the deity, and each visitor would get a dollop of the sheera in a cute little paper cup.

Now while sheera, made with rava (farina or cream of wheat), is a common breakfast food and snack in Indian homes, the sheera made for poojas is just a little more special. For one, it incorporates bananas which elevates it from just delicious to simply sublime. Sheera also uses tons of ghee and milk which, as is obvious by now, is not part of my pantry.

To make Sheera which was as authentic-tasting as it was tasty, I used almond milk. Almond milk is a great substitute for dairy in sweets and it is quite easily available at health food stores. Believe me, you will never be able to tell the difference. Besides, in a dish that uses a generous amount of sugar, it is also a healthier alternative.

My vegan version of Sheera tasted exactly like the original, and no animals were hurt in its making. Now that's something even a god has to love. 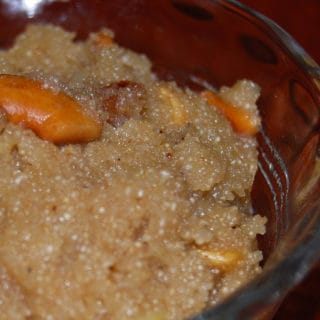