While there’s absolutely no thing I can never live without, there are a few gadgets that I rely on in the kitchen to make my life a little less hectic. You certainly don’t need them to be a fine cook, but if you are in the market, these are what I use. The links below are affiliate links, which means that if you click on  something and buy it, I will get a tiny commission — at no cost to you — that helps me keep this blog going.

My Vitamix blender is the workhorse of my kitchen, and I’ve had mine for many, many years now. I use it several times each day for jobs ranging from blending kale smoothies to heavy masalas. I also grind up those difficult dosa and idli batters in my Vitamix, and occasionally I use it to make ice cream or even a hot cup of soup. Really. It’s on the pricey side, yes, but I came to it after many broken blenders and money wasted, and would recommend this to anyone looking for a product that will last a lifetime. 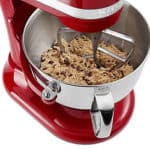 After using a Hamilton Beach Stand Mixer which I  bought at a Target more than 15 years ago for under 70 bucks (there was a sale on), I upgraded recently to this KitchenAid Stand Mixer. It is terrific for handling heavy bread doughs, which tended to rattle the Hamilton Beach. If you’re looking for a budget buy, I still recommend the Hamilton Beach– after all those years it was in perfect working condition when I turned it over to the thrift store. But I have to confess, I absolutely love my KitchenAid!

Like many other gadgets I recommend here, my KitchenAid Food Processor has been in my kitchen for more than a decade, and I rely on it to do a number of jobs for me every day, from making hummus to kneading pie dough and grating cauliflower. You really can’t go wrong with this one.  Compared to the older model I have, these newer models look great and are available in such pretty colors.

I don’t do nonstick in my kitchen because I really never have met a non-stick pan that stayed that way for more than a few months– not to mention all the chemicals that go into the coating. I switched long ago to cast iron pans for most of my cooking, and I love them. I have Lodge skillets in many different sizes, a reversible grill, and a regular griddle for making rotis, naans, etc.. They are economical and they work for everything — from pan-frying to sauteeing to stir-frying and even baking bread — and they look so pretty while doing all that hard work.

For foods that I can’t cook in cast-iron pans, I use stainless steel. I bought a set of Emeril by All-Clad pots and pans when I first started to move away from non-stick, well over a decade ago. When buying stainless steel, be sure to pick out heavy-bottomed pots and pans. The cheaper, lighter ones can cause foods to stick and burn.

Desi and I are not food snobs, but we are definitely coffee snobs. Although we will admit (reluctantly) to getting a cup of whatever passes for coffee at a rest area fast-food dive during long road trips, just to keep our eyes open, you won’t catch us dead drinking the bad stuff while we are wide awake.  I am also a voracious coffee drinker — a habit I caught while working on tight deadlines as a journalist and one that’s been impossible to shake off. Not that I want to, I love my cups of Joe. Our Cuisinart grind and brew coffeemaker was the best investment we made, coffee-maker wise, after Desi had had his fill of trying out all of those gadgets with pods and whatnots.

A good knife is one of the most important tools a cook can have, and mine were gifted to me about 10 Christmases ago by Desi. I  love my Henckels’ knives and I can definitely credit them with improving my knife skills. When they lose their edge, I sharpen them up right at home and they’re as good as new.

I use a Braun coffee grinder that I bought a few years back to grind up all of my homemade spice mixes, and I love how well it does the job, especially in my kitchen where I put it through, well, the grinder. I tried out a fancier Cuisinart version once but it just didn’t powder the spices as finely as I wanted it to, and then it died within months. For some reason I couldn’t find a reasonably priced version of the Braun on Amazon. This Krups coffee grinder looks comparable and is priced about what I paid for the Braun when I bought it.

In our house, waffles and pancakes are a must-have on the weekends, what with both Jay and Desi clamoring for them the moment they wake up. I’ve had my Cuisinart Belgian Waffle Maker for about three years now, and I love how easy it is to clean it up — a big gripe I have had with past waffle makers that claimed to be non-stick. And oh, did I mention it makes the best waffles?

The KitchenAid toaster oven is one of my favorite timesaving and moneysaving gadgets in the kitchen. It takes a toaster oven much less time to preheat than your average-sized gas or electric oven, since it’s much smaller, and you can roast veggies and even bake french fries in it. This is not a good choice if you want to bake a cake or a bread, but it will do for almost anything else. Because it’s smaller, it’s more energy efficient too. And oh, I sometimes use it to toast bread.

My pressure cookers are quite easily the most timesaving and energy efficient gadgets in my kitchen. I use my Fagor 3-in-1 Electric Pressure Cooker almost everyday, for jobs that range from cooking Opie’s meals to tenderizing beans and legumes in no time at all, and even to cook veggies. Pressure cookers not only cook food without drying it up, but they also tend to retain more nutrients than cooking in a saucepan on a stovetop. Not to mention they do it in a fraction of the time. This electric cooker also triples up as a slow cooker and a rice cooker. Even better, you don’t have to worry about the cooker exploding, or going over time, or all of those things you sometimes have to worry about with the stovetop versions.

I also use this stovetop Fagor Pressure Cooker on a daily basis, simply because the electric one is tied up too often with other stuff. I have it in two different sizes– an eight-quart and a four-quart. The four-quart one is perfect for day-to-day cooking, and mine came with a nice glass lid so I can also use it as a saucepan. I rarely use the eight-quart one, but it does come in handy when I’m cooking for crowds. The eight-quart version also includes a nice steamer basket. 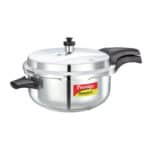 I may sound like a pressure cooker collecting freak by this point, but I didn’t have a pressure cooker like the one that mom used — the one that whistles — when I was growing up in India, and honestly, I missed it. I now have this cute little three-liter Prestige pressure cooker that tells me exactly when the food is done by letting out a steam whistle. It might rattle the faint of heart in the beginning, but the whistle works as a timer and is really neat.

My Hamilton Beach Crockpot is the unsung hero of my kitchen. I use it all the time in winter and summer. In summer, it makes cooking easy without heating up the house or requiring you to slog over a hot stove, and you have a delicious meal waiting for you when you wake up or come home after running errands. In winter, I can think of nothing more comforting that a bowl of steaming soup or stew from the Crockpot. I also have a small one that makes cooking for two a breeze.