You are here: Home | Non-food posts | Why Gandhi Inspires Me 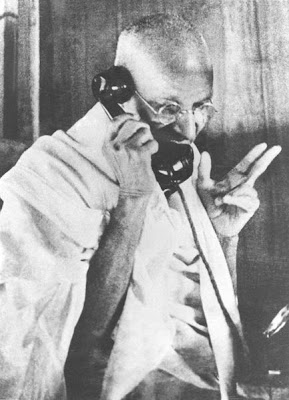 I might not be your average Gandhian. After all, I live in the West, I don't wear khadi or even a sari, and I certainly don't abstain from liquor.

But I do think of myself as a Gandhian, and here's why:

Because I believe in self-reflection. To me, the greatest quality of the Mahatma was the fact that his whole life was an experiment in self-improvement. He explored almost every facet of his own personality, striving all the time to make himself a better person. Of course, he made mistakes, but he was only human.

Because I believe in non-violence. Gandhi's ideas of non-violence are usually illustrated with his peaceful resistance against India's British colonizers. But for Gandhi, non-violence was a far bigger, all-embracing concept. It included violence through words, through action, even through thought. He recognized that the smallest, careless act could hurt someone, somewhere. In its essence, non-violence was, to Gandhi, about living as consciously as one possibly could, aware of one's actions on the environment and the people and creatures around oneself.

Because I believe in simple living. And although this is not something I practice as well as I would like to right now because I live in a city, caught up in the pressures of making a living, it is an ideal I aspire to. Let's face it: what do we really need? A shelter over our heads, enough to eat, the love of those we love, and a sense of satisfaction with what we do. Stuff, in the end, is only stuff. You can never have enough of it, and if you have more than you need, why not share it with those who don't? No one could have said it better than Gandhi: "The Earth provides enough to satisfy every man's needs but not every man's greed."

Because I believe in ethical vegetarianism. This one flows from all of the above. And it is, as all of you know, an important theme in my life and on my blog. What delights me most about Gandhi is that he was an ethical vegetarian. Sure, he was born in a vegetarian family, but that wasn't why he embraced vegetarianism. In fact, he started eating meat as a very young man on the advice of a friend who told him that the British were stronger and could take over India because they ate meat. Gandhi returned to vegetarianism both because of a promise he gave his mother when he left to study in England, and because he realized that the concept of non-violence had to include every sentient creature. Later he even stopped drinking milk after learning of the cruel practices used to make cows yield more milk. Gandhi, I strongly believe, would have been a vegan had he not been advised by his doctor to drink goat's milk after a series of health problems and because, in those days, alternatives like soy milk were unheard-of in India.

It's 139 years to the day since Gandhi was born, more than 60 years since he died. But when I need inspiration in these modern times, I often turn to the little old man. His ideas are only ideals in our torn world, but truth be told, they never cease to fill me with hope.

And that's why I am a Gandhian.