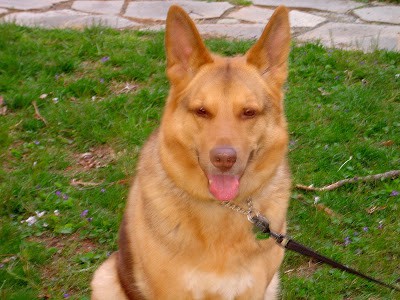 My dog Lucy is a traffic-stopper.Almost every day, when I walk her, someone stops to exclaim just how beautiful she is. Of course, most say it from a distance. Lucy, a German Shepherd, inspires awe and admiration but also more than a little fear in people not used to her because she looks, like all dogs of that breed, quite ferocious.She is anything but.

Sweet and shy but immensely intelligent, Lucy is our first-born. Meaning, of course, that she's the first dog we adopted, from the Washington Humane Society. But I saved Lucy's story for the last because she is, to both Desi and me, immensely special. In many ways, she is a life-changer. 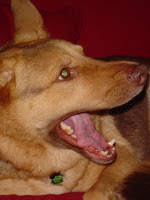 Some of you might already be familiar with the stories of my other rescues, Freddie, Opie, Pubm and Pie, who I've blogged about before. In Lucy's case, there isn't much to tell in terms of her history except that she was a year old when we adopted her. The shelter didn't know anything about her past, and that was that.

When we went to the shelter that first time in 2002, we didn't expect to adopt a German Shepherd. We wanted a smaller dog, someone we could take long, peaceful walks with. We put in an application for a cocker spaniel mix, Sheba, who looked perfect.

But the shelter asked us to state a second, third and fourth preference as well, in case someone had already put in an application for Sheba, and Lucy (then named Goldie) made it to our fourth preference.

When we first saw Lucy, she was sitting, quiet and dignified, in a corner of the run. She didn't look terribly happy or interested in us. When we asked a volunteer to bring her out, she ran gorgeously and elegantly all the way to the fence, happy just to be outside her small run. She didn't so much as acknowledge the two people who were desperately trying to get her attention.

But there was something special about her, and we put her on our shortlist.

A couple of days later the shelter called us to say Sheba had been adopted by another family, and did we want one of our other choices?

Desi, in an inspired moment, asked her if the other dogs had applications on them. All of them did, the shelter staffer informed him, except Goldie.

So we brought Goldie home and renamed her Lucy after our favorite sitcom star, because Lucy, uncharacteristic of regular German Shepherds, had the most gorgeous golden-brown coat and a red head. 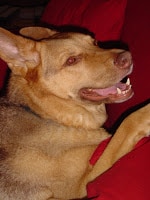 That first day, this dog who had refused to acknowledge us at the shelter followed us everywhere we went. She slept a lot, happy, perhaps, to finally be home.

But when we went to work, she was riddled with separation anxiety. She chewed up anything in sight, and once even ripped apart a cushion from our brand new couch.

It was a phase, though, and it passed. As the days went by Lucy grew more and more settled in her new house and fixed herself to Desi who was, clearly, her favorite person. When we brought home Opie, she was so happy, she wouldn't leave him alone for a moment.

I wanted to tell the exact story of how Lucy came to be adopted by us because she laid to rest many myths people have about adopting dogs. Some believe the dog has to form an instant connection with them, or it is not for them. Nothing could be farther from the truth. Of all the dogs I have adopted and fostered, maybe just one or two showed any real interest in us the first time we met them. But each one invariably was deeply in love with us- and we with them- within hours of coming home. In the unnatural and even impersonal atmosphere of a shelter, it is not easy for a dog to form loving connections with each and every person that peers at them through the bars of the run. But give them a chance, and they'll give you their whole heart.

Lucy also changed my life in other ways. She opened our eyes to the cruel fate that millions of homeless dogs and cats suffer - more than 3 million cats and dogs are euthanized each year in shelters for lack of homes. While dog and cat breeders had never been our favorite people, we realized even more after becoming the parents of our shelter dogs and cats, just how cruel a practice it is to create more and more puppies and kittens when so many others have to die homeless in shelters.

This realization would lead to our adopting more dogs and cats, and fostering several others, most of whom we placed in loving homes.

Lucy is also, ultimately, the reason why this blog exists. I had been a meat-eater all my life, but loving her made me realize that in the end, there really is not much of a difference between a dog and a cat and a lamb and a cow or even a chicken. They care for their lives just as we do, and protect it as fiercely. We really have no right to take it away from them when we don't need to.

Lucy has now been with us more than five years, and she's as happy as a dog can be. Her self-assigned job - every Shepherd needs a job or they give themselves one - is to keep the other dogs safe and in check. She protects her canine siblings fiercely if they get into trouble with other dogs, and bullies them around the house where she is, clearly, the alpha dog.

When I look at Lucy now I cannot believe that she was not our first choice when we applied for a dog that first time. She has given us more love and inspiration than we ever could imagine. And because of that, she will always be our most special girl.
(C) All recipes and photographs copyright of Holy Cow! Vegan Recipes.