So can you stomach meat produced in a lab? Humane meat, meat that did not come at the cost of an animal's life, meatless meat that tastes like meat but just isn't?

If you've been alive in this century, you know that there are efforts afoot to produce meat from lab-cultured stem cells. And although some famous vegans and vegetarians have said it's not for them -- but great for meat-eaters and animals-- it sounds to me like a win-win for just about everyone.

After all, we vegans go to great lengths to find meat substitutes that emulate the texture of meat? If we can get something that's as close to the real thing as possible but without the cruelty and killing, why wouldn't we eat it?

And what about the carnivores among us, those of us who will not give up their burgers and beef at any price? Can the idea of lab-produced meat -- quite possibly the solution to world hunger, if proponents are to be believed -- sway them enough to give it a try?

I will admit that the idea of meat grown in a lab doesn't sound appetizing. In fact, it sounds rather gross. But then, some vegan substitute meats and cheese can be pretty gross too, heavily processed as they are.

This week, there was a lot of press again around the idea of lab-grown meat following the publication of a paper by two Dutch researchers. According to a National Geographic article, everyone from Google's Sergey Brin to New York Times food critic Mark Bittman have spoken out in favor of exploring lab-grown meat and Brin has even bankrolled the world's first cultured-beef hamburger.

There's just one hurdle right now--  at the current cost of production, cultured meat is going to cost you $240 for a pound. And one thing that always seems to be missing from any discussion about lab-grown meat is whether it will be healthier than the real thing, or not -- a factor that would definitely play into most people's decision.

So how do you -- vegan or not-- feel about lab-produced meat. Assuming it was affordable -- or assuming you are super rich, do you think you would eat it?

Today's recipe is one of my favorites for the lunchbox-- Thai Noodles in a Spicy Peanut Sauce. Just saying those words makes my mouth water.

The combination of noodles with spices and peanut butter is pure genius, and whoever chanced upon it -- Thai or not -- deserves a tip of the hat. The sweet peanut butter and spices  perfectly flavor the bland tofu  and noodles, making this dish delicious beyond your wildest dreams.

To make my noodles super-healthy and nutritionally complete, I throw in some cubes of tofu and tons of fresh veggies. My favorites are carrots and onions and bell peppers, although you couldn't go wrong with zucchini, broccoli, or even leafies like spinach or kale.

If you love easy recipes and if you love Thai food (why wouldn't you?) this is the recipe for you. Enjoy! 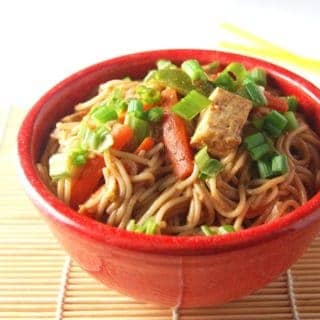