Jump to Recipe
These Vegan Boston Baked Beans are perfect minus the pork. Molasses, sage, and barbecue sauce add a deep, rich, smoky flavor. Serve this Fourth of July with a veggie burger or dog and potato salad. A vegan, gluten-free, soy-free and nut-free recipe.

This past week, Desi, Jay and I drove through Virginia, past Charlottesville with the sprawling University of Virginia campus, and into Roanoke, a beautiful city in the Blue Ridge valley and home to the largest manmade star. It's a beautiful drive, and one we've made before, through rolling countryside against the backdrop of the mountains, past stately mansions, modest farmhouses, and emerald meadows dotted with cows, sheep and horses.

Along the way, we stopped by Monticello and Montpelier, the homes of America's third and fourth presidents, Thomas Jefferson and James Madison.

The last time we were here was almost 15 years ago, and we decided to return with Jay, who will be a fourth grader this September, because there's truly no better way to learn the history of our great country than by retracing the footsteps of those who contributed to creating it. And the homes of Madison, the father of the American constitution, and Jefferson, the principal author of the Declaration of Independence, provide a somewhat intimate look into the minds of two men who helped shape this land into the world's greatest democracy.

One of the things I love about being an American is our ability to turn a critical eye on ourselves and to use the freedoms we have to express that criticism energetically: a freedom given to us by our founding fathers like Madison and Jefferson. Their own lives were not free of missteps, the greatest one being, of course, slavery, which they both endorsed and promoted by being slave owners themselves. But their homes, while a reminder of their greatness as politicians, and, in Jefferson's case, as an inventor, do not stop short of reminding visitors that the work of these two great presidents contradicted itself at times. It is a striking irony that even as Madison included the phrase "all men are created equal" in the Declaration, he owned hundreds of slaves, our tour guide reminded us.

In an exhibition in the cellar of Montpelier, steps away from the bare huts that housed Madison's slaves, a video played clips of recent events and showcased the Black Lives Matter movement, a reminder that although slavery is long gone, racism isn't. I was happy for my son to watch that video and to know that our world, although not a perfect one, is not blind either, nor devoid of hope. But in front of the television set in our motel room at night, it was hard to tune out the reality of our times, as our current president made news for slamming our greatest asset as a democracy, our free press, and for a misogynistic attack against a female journalist.

I have never seen myself as a jingoistic person, not when I lived in India, nor when I moved here to the United States and became a citizen, because I have never been crazy about divisions that set us apart from each other as humans. But America has been my home for 20 years now, and I love my home fiercely. Like many Americans today, I watch with concern and sometimes fear as the freedoms we hold dear are put to the test day after day. The visit to the homes of our founding fathers, just before we celebrate another Fourth of July, was a lesson for a young American like Jay, and a much-needed reminder for a jaded old one like me, that those values are deeply embedded in our history and our way of life, and they will remain infallible as ever, no matter who attacks them.

The Fourth is a time to celebrate our country, and has there ever been a better way to celebrate anything than with food?

No wonder then that Independence Day is a day to gather around the grill, in your backyard or here, in the Washington area, on the National Mall, and stuff yourself to the gills before ending the day with a spectacular display of fireworks.

Whatever you are planning to do, I have for you today a recipe that you will absolutely love. My vegan Boston Baked Beans.

Boston Baked Beans are typically made with salt pork, although some recipes substitute bacon, but for this vegan version you need neither. Instead, for my Vegan Boston Baked Beans, I use some plant-based ingredients to create the perfect, smoky, deep and rich flavor that will go perfectly with your veggie dogs or veggie burgers. Smoky herbs like sage and lavender add freshness and even more flavor.

Serve these Vegan Boston Baked Beans with a veggie burger or a veggie dog, a potato salad, or just by themselves, with some crusty bread and a glass of cold beer, for a perfect Fourth of July picnic. 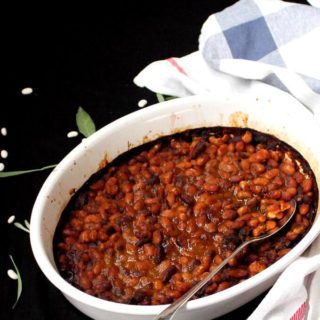