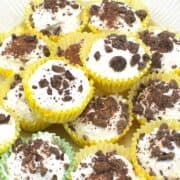 Yummy vegan keto cheesecake bites to satisfy every sweet-tooth craving. These are cloud-soft, lemony and absolutely scrumptious with a drizzle of chocolate. They take all of 10 minutes to put together and with just two grams of carbs in each serving they are guaranteed to become your favorite guilt free treat ever!

I'm in love with these delicious and lemony little vegan low carb cheesecake bites. They need just six ingredients and take minutes to make, but they are so good I can't stop popping them.

And here's the kicker: I don't really have to stop.

As I continue my low carb journey I've been sharing with you some of my favorite sugar free low carb and keto desserts, which include these vegan protein energy balls, these vegan keto brownies, vegan keto cheesecake blondies, and vegan low carb cheescake. I've learned so much along the way and I can't wait to share it with you, especially if you are vegan and looking to cut carbs.

Cream cheese is a great base ingredient for dreamy low carb and keto friendly treats. And us vegans can join the party because vegan cream cheese, although not devoid of carbs like the dairy version is, tends to be pretty low carb. Ditto for vegan whipping cream, which also goes into making these keto bombs creamier and dreamier.

Why you will love these no bake vegan keto cheesecake bites

I don't have a mini muffin pan. Can I use a regular muffin pan to make this recipe?

Yes, it doesn't really matter because the mini muffin tin is just meant to hold the paper liners in place. You can use anything that will hold the paper cups firmly in place, or just skip the pan and use silicone cupcake liners, which are firmer than paper cups.

How do I store these?

You can store these keto mini cheesecakes in the fridge in an airtight container, without overlapping, for up to five days. They will be soft and light as a cloud when you bite into them.
You can also freeze these for up to four months. Flash freeze them for several hours in the mini muffin pan and then store in a freezer safe bag or container. Set them out to thaw slightly before you eat them.

You can tweak the recipe to your taste.

Use this keto mini cheesecake recipe as a master recipe and try out different flavors. You can use different fruit extracts in the filling, like strawberry or raspberry or orange, instead of vanilla. Or stir in some sugar-free jam before scooping the bites.
You can also sprinkle nuts over the cheesecake bites instead of chocolate. Or add ½ cup almond flour into the cheesecake mixture for a bit of texture. 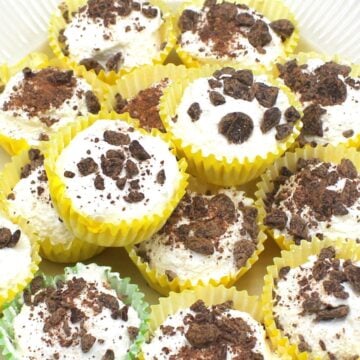