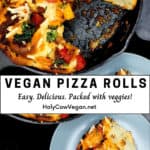 I've made my vegan pizza rolls even healthier and tastier by adding tons of veggies to them. It's a surefire way to have your pizza and make it work for--and not against--you! A vegan, soy-free, nut-free recipe.

If pizza is your undoing--it is mine--here's a way to eat it without any of the guilt and all of the fun.

My vegan pizza rolls recipe has lived on this blog for four years now, and they are an immense favorite, especially with my preteen, Jay.

Like most kids, Jay believes that pizza should be a food group he can live on and thrive, and like most moms, I disagree. These pizza rolls are a welcome compromise that make us both happy.

I made these much the way I have always made my pizza rolls, but I was excited at the idea of adding even more veggies into them after watching a Jamie Oliver video where he stuffed fresh vegetables into a "twister bread."

The veggies not only make the pizza rolls healthier, they make them much more delicious. I didn't hear any complaints from Jay. 😉

I used a very basic pizza dough recipe that I'll include in the instructions. You can make your own or make these rolls with storebought pizza dough.

The texture of these could vary based on what recipe you use. My recipe will make rolls that are chewy on the outside and soft and fluffy on the inside, which is just perfect.

To make the dough, I used three cups of all purpose flour with a packet of yeast (2 ¼ tsp), water, a bit of sugar to feed the yeast, salt and a couple of tablespoons of extra virgin olive oil.

You will knead the dough, let it rise once for about an hour, then make the rolls and let those rise another hour. So if you're making these for lunch, get started around 9 a.m. And remember most of the time in between that and lunchtime is hands off time, when you're letting the dough rise.

To stuff the rolls, roll out the pizza dough into a rectangle about 18 inches by 12 inches. Slather on a pesto or marinara sauce, then add as many veggies as you can possibly get in. I will include a recipe for the vibrant sundried tomato pesto I used this time, but a marinara or basil pesto works just as well. Use this homemade vegan marinara sauce, which takes just minutes and five ingredients to make, or storebought.

On top of the pesto add about three cups of veggies. I used halved cherry tomatoes, spinach and chopped yellow and orange bell peppers. Zucchini, sweet peppers, parsley, any other quick cooking greens and veggies will work as well.

Finally, layer on some vegan cheese. This is optional, but as most kids can't imagine pizza without cheese, it helps. I used Daiya's mozzarella shreds.

Roll up the dough along the longer side, and pinch the seam to seal. Cut the long roll into nine equal pieces. Place them in a cast-iron or ovenproof skillet or baking dish sprayed with oil. A lot of my veggies fell out of the stuffing at this stage, but just pick them up and scatter them on and between the rolls. They'll look really pretty as they bake up.

The moisture from the fresh veggies also keeps the rolls from drying out, as some pizza rolls tend to do, so this idea is a certain win. 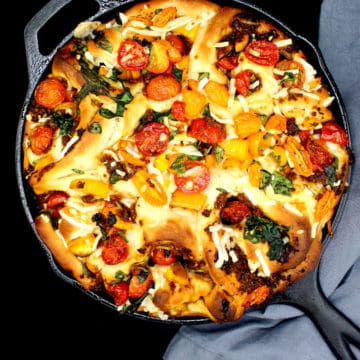 For the pizza dough:

For the sundried tomato pesto: