A vegan rhubarb crisp that is easy as pie to make. A gooey, jelly-like, tart rhubarb filling is topped with a golden, delicious, oat and nut crisp. Can be a gluten-free recipe. Perfect for breakfast or dessert.

I woke up yesterday, excited to bake up this sumptuous dish for my family: a gorgeous, tart-sweet Vegan Rhubarb Crisp that tastes good enough for dessert but makes a perfect breakfast.

I love rhubarb and I can't get enough of it in the few weeks of spring that it's available. It makes great recipes, sweet and savory, and it's rather perfect in a rhubarb cake, a rhubarb pie, a rhubarb galette, or even a sweet rhubarb bread.

When I have too much of it on hand, lucky me, I turn it into a rhubarb jam.

I'd been longing to make a rhubarb crisp for a while, and I came across a Mark Bittman recipe that seemed really straightforward and yet sounded utterly delicious. It needed just a little veganizing, and I also used natural sweeteners like maple syrup and coconut sugar instead of white and brown sugar, making the crisp healthier and more breakfast-worthy.

In the end, it was truly the perfect breakfast, and it was kid friendly as well, because Jay guzzled it down. If you have a mind to, serve it with a dollop of whipped cream, although the crisp itself is sweet enough and a great foil to the tart rhubarb.

Ingredients you will need for the perfect Vegan Rhubarb Crisp:

How to ensure you get a perfect Vegan Rhubarb Crisp:

I will leave you now with the recipe. If you can still find rhubarb in your market, I hope you will try it. Otherwise file it away for next spring, when it stages a return. I don't let spring ever pass me by without cooking with this delicious ingredient at least once, and neither should you. 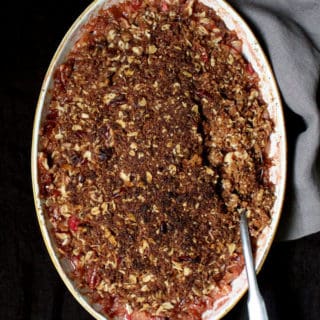