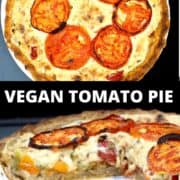 A classic, southern style but vegan tomato pie with layers of red, ripe tomatoes and cherry tomatoes smothered with vegan cheese and mayo, and all of it enclosed in a flaky, part whole wheat pie crust. A soy-free and nut-free recipe.

If you love pizza (or are you for real?) you will love this tomato pie. It has gooey cheese, sweet basil and all that tomatoey goodness. Put it all together in a part-whole-wheat crust and this pie really does taste a lot like pizza. And that, of course, makes it eminently kid friendly.

Make it today and treat your inner child. It couldn't be easier and all you need are seven ingredients (10, if you make the crust at home). Then be sure to tell me all about it, or take a photo and tag me @HolyCowVegan on Instagram.

How to make the tomato pie

This is a really simple recipe, and quite foolproof, with one caveat: you need to ensure you get as much of the liquid out of the tomatoes as you can.

Tomato pies have a reputation for being soggy because of all those juices tomotoes tend to express, and while some of that moisture will give you flavor and a nice, creamy filling, you don't want all of it in there. So be sure to follow the steps below carefully.

Prepare the pie crust: This only applies if you're making the crust at home. If using storebought, skip to the next step. To make the pie crust, place the flour in a bowl (you can add a dash of black pepper to the flour for more flavor) with salt and the butter, cut into small cubes. Cut the butter into the flour using a pastry cutter or a fork so you have some pea-sized pieces and some smaller. Drizzle ice cold water and mix with a fork until the dough comes together and holds together. Try not to make the dough too wet--it should just hold together when you ball it up. Wrap the dough in plastic wrap, forming a disc as you wrap it, and place in the refrigerator.

Before baking, roll out the crust dough to a circle slightly larger than the pie plate, on a floured surface. Fold the crust in half and gently lift it to the pie plate and fit to the sides and bottom. Tuck any overhanging dough underneath and crimp the edges for a decorative look.

Poke holes into the bottom of the pie crust to keep it from getting soggy during baking.

Salt and strain the tomatoes: After you slice the tomatoes (or halve cherry tomatoes, if that's what you're using), place them in a colander and sprinkle some salt over them. Toss them and then let them stand until they have expressed a lot of their juices. After that, squeeze out as much moisture as you can using your fingers (be careful so the tomatoes don't lose their shape). The less moisture you have in the recipe, the more sliceable your pie will be.

Make the filling: Mix the mayo and cheese together with the chopped basil.

Assemble the pie: Place the onions at the bottom of the crust in an even layer. Place half the tomatoes over the onions. As I was using both cherry and regular tomatoes, I used the cherry tomatoes in this step.

Spoon the mayo-mozarella-basil mix over the top of the tomatoes and spread it around evenly. Place the remaining tomatoes on top and press them into the mayo mixture, which will help all the ingredients incorporate.

Bake in a preheated 350 degree Fahrenheit oven for 55-60 minutes or until the top is set and golden. I turn on the broiler for the last three minutes to give the vegan cheese a golden-brown hue. 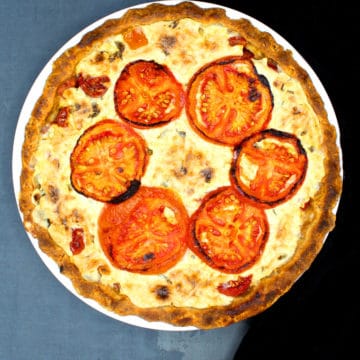