Jump to Recipe Pin Recipe
This White Bean Chili made in a pressure cooker is smoky with cumin, rosemary and jalapenos, and creamy with cashews and potatoes.

My pressure cooker is perhaps the most used appliance in my kitchen, but I rarely ever post recipes made mostly in it. Part of the reason is that not everyone has a pressure cooker. But it could be time to change that.

I get that many of you think pressure cookers are scary. I did too. Growing up in India, where pressure cookers are in every home, I heard plenty of stories of  cookers going rogue, blowing food all over the walls, blasting a hole through a ceiling, and so on. But I doubt that ever kept an Indian cook from actually using one-- in fact, it is hard to imagine Indian cooking without a pressure cooker.

In India, pressure cookers always came outfitted with three round aluminum containers that stacked one on top of the other. Every day, without fail, the cooking ritual in my mom's kitchen started with the pressure cooker: she put rice in the bottom container, dal in the middle one, and vegetables on top. Then she gathered the wire handles that held the containers together over the top and lifted them into the pressure cooker. Checking the black rubber gasket that slid into the lid and sealed off the cooker to make sure it wasn't broken was a crucial step, and once that was done, she'd slide the lid in and lock up the cooker. One, two or three whistles from the pressure regulator later, which took just a few minutes, everything was done. The rice could wait at the table while the dal got its tadka and the vegetables got sauteed into a sabzi.

Indian cooks are nothing if not smart and frugal, and the pressure cooker was an invaluable accessory. In an India where cooking gas was a valuable commodity, the pressure cooker shortened cooking times and preserved valuable nutrients in the food. It was a win-win. Other than the blowing up, that is.

I was probably the only Indian who moved to the United States without a pressure cooker in her bulging suitcase. I regretted it as soon as I had landed. I couldn't afford one made here, and I hated the hours it seemed to take to cook lentils and beans on the stovetop. I was thrilled to find out that a fellow Indian student Desi and I were rooming with had one and I made good use of it.

Now, I own two pressure cookers -- a stovetop one and an electric one -- and I can't imagine my kitchen without them. Last week, the handle of my stovetop cooker -- which I mostly used for my daily cooking -- gave way, so I turned to the electric cooker. I had been using it almost every day too, but almost exclusively to make Opie's meals, and it was looking rather forlorn.

For anyone concerned about safety, electric pressure cookers are a wonderful deal: they do not make scary, hissing noises or gush out steam without warning, the way the stovetop version does. Rather, they make comforting, gurgling sounds that let you know the food is cooking. They are also super-safe -- in fact, so are the modern stovetop versions. Most electric pressure cooker manufacturers will include cooking times for common ingredients, like beans and rice, in their manuals, which takes a lot of the guesswork out of cooking. And you can set the cooking time and forget about it all: the cooker switches off automatically and some versions even keep your food warm.

My electric pressure cooker is actually a multi-cooker (this one is a more modern version of the cooker I have), with slow cooking and rice cooking functions included, but I rarely use it for anything other than to pressure cook. And most of the times I will cook the beans in the pressure cooker, then continue cooking on the stovetop. This time, pressed as I was for time, I decided to take the easy way out for my Vegan White Bean Chili by bunging everything into the pressure cooker, and letting it do its thing.

There was some stovetop cooking involved in this recipe: mainly sauteeing the leeks and garlic. I also cooked the beans separately first, because I wanted to be sure I got the amount of water in the recipe right. You could, if you would like to do some guesswork with the water, add uncooked beans and cook everything together, but I liked my way because the chili was very, very flavorful and the potatoes cooked just enough without breaking down completely.

This vegan White Bean Chili is lipsmackingly delicious. It's smoky with cumin and jalapeno and rosemary, creamy with potatoes and a smidge of cashew cream, and hearty as can be. The leeks add wonderful, sophisticated flavor and their greens, of course, combined with the beans, make this a super-healthy dish. 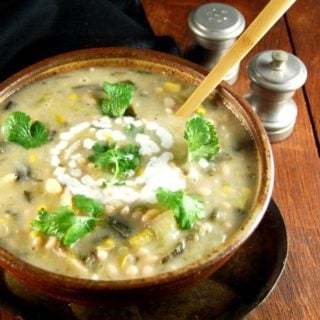