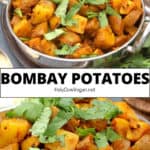 These easy, tasty Bombay Potatoes are simply spiced with curry powder and pan-fried with tomatoes until they develop a delicious, golden-brown crust. They pack a wallop of flavor and they are a great vegetable side to serve with any Indian meal, especially dal and rice.

I was born and lived in Bombay into my 20s, but in all those years I never once encountered a dish named "Bombay Potatoes."

So when I started to see recipes for Bombay Potatoes begin to pop up across the internet with no clear explanation of their origin but with quintessentially Indian ingredients, I was tickled curious.

Sure, we ate potatoes in Bombay--a lot. Bombay is a microcosm of India and you could find all kinds of potato dishes belonging to the many regional cuisines here. There was Batatyachi Bhaji, a local Maharashtrian, turmeric-stained, mustard-seed-studded side to scoop up with pooris, especially on picnics and outings. Jeera Aloo, a north Indian dish with cumin seeds as their main flavoring. A south Indian potato curry with tomatoes and sambar powder that was eaten in the homes of my Tamil friends in Bombay and that, Desi tells me, was a Sunday staple in his childhood home in Madras. There were the typical restaurant offerings: aloo gobi, aloo matar, aloo saag....but never Bombay potatoes.

What was just as confusing is that the various Bombay Potato recipes on the web seem to vary drastically. Some are just Jeera Aloo, others are almost exactly like Batatyachi Bhai. Still others use tomatoes, like the South Indian version.

Since I can't leave things well alone when they pique my interest, I kept digging into this until I could begin to make some sense. What seems very likely, although I didn't find a single source confirming this, is that Bombay potatoes -- or at least the name -- are British rather than Indian in origin.

It makes sense. The British introduced potatoes to India during colonial times, were rather chuffed about it because they were on a mission to introduce the rest of us to what they deemed "superior" vegetables, and then they took our chefs back home with them to spice up their own cuisine. These cooks went on to create a whole slew of dishes that have roots in India but were created in Britain, like balti, tikka masala, kedgeree and curry powder.

The Bombay Potato curry, then, is not so much an Indian potato recipe but rather a spin-off -- or amalgamation--of different techniques and flavors used to cook potatoes in India. That different Bombay Potato recipes have little in common except the fact that they have potatoes in them and are made with Indian ingredients is further confirmation of the fact that while the actual dish -- or dishes grouped under the name -- may have originated in India, the name almost definitely did not.

I'd love to know more, so if you happen to be an expert on Bombay Potatoes and their beginnings, be sure to drop a comment below and enlighten the rest of us.

Now, for these Indian-spiced Bombay Potatoes. I put my own spin on these and I think you'll love them. I simmered the potatoes with tomatoes because these two veggies are an incredible combination, especially when you let the tomatoes cook long enough to crust the potatoes. And then I used curry powder because its flavor is perfect here and because it, too, is so confoundingly British.

Why you'll love this recipe

How to make Bombay Potatoes

What to serve with Bombay potatoes 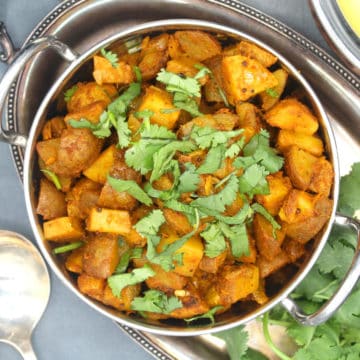