Jeera Aloo is one of the simplest dishes you'll ever cook, but everyone will love it for sure!

Jeera Aloo, a simple Indian dish of stir-fried potatoes with cumin, needs just seven ingredients and comes together in 20 minutes. It's so yummy, however, that you will fall in love. This makes a great vegetable side dish for dinner served with roti or puri or with dal and rice. In addition to being vegan, this dish is also gluten-free, soy-free and nut-free. It's also very kid-friendly.

The Indian festival season, which runs between the months of August and November, is a time for both feasting and fasting. Sure, there's a ton of great food to be eaten during some of the biggest Hindu festivals that occur during this time, like Ganesh Chaturthi, Navratri, Dusshera, and Diwali. But there's also time built in  to cleanse your body through an upvaas or vrat, when people either fast entirely, or eat tasty, mostly gluten-free foods.

Both the eating of the rich food and the abstinence from it occur for religious reasons, but even if one doesn't buy into that sentiment, it doesn't seem such a bad idea to break a period of heavy eating with the occasional fast to get things back into balance, does it?

One of the delicious foods served and devoured during the period of fasting is this scrumptious Jeera Aloo, a very simple but incredibly delicious side of potatoes flavored with cumin seeds.

There are many, many Indian style potato sides, including some like Bombay Potatoes that include tomato sauce and spices. But a jeera aloo doesn't need those trimmings--it is meant to be a simple, homely dish, one you throw together when you don't have time to make anything else but want something very, very tasty anyway.

What to serve with Jeera Aloo 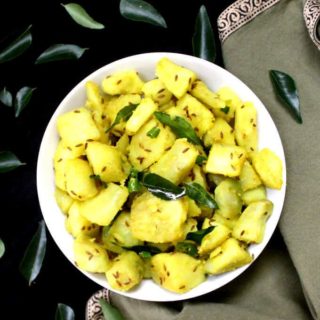