A vegan Palak Tofu Paneer or Saag Tofu Paneer recipe that's as good as anything you'd get at an Indian restaurant, perhaps even better. The spinach is creamy and spiced perfectly. Cubes of superfirm tofu make a healthier and delicious option for the vegan cheese, paneer, that's typically used in this north Indian recipe. Eat with a naan or roti for the perfect Indian meal. A vegan, gluten-free recipe. 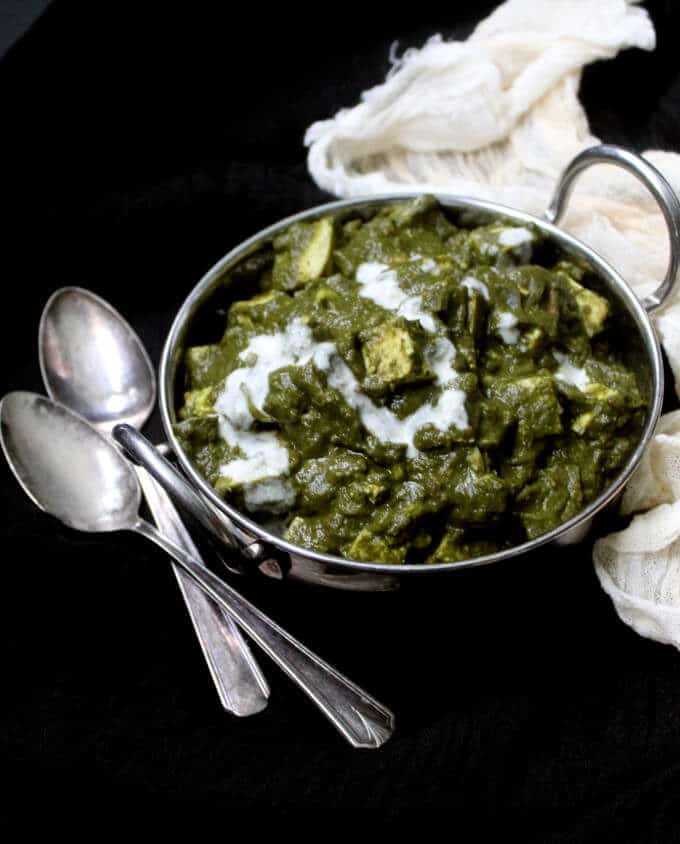 I first posted my tofu Palak Paneer recipe for you back in 2008 -- 10 years ago -- when there were just a handful of vegan blogs and perhaps no other blog that posted Indian vegan recipes. The reason I rushed to veganize this perpetual Indian restaurant favorite is that it was one Indian dish I often ordered when I ate out before I became vegan and I certainly didn't want to live without it. 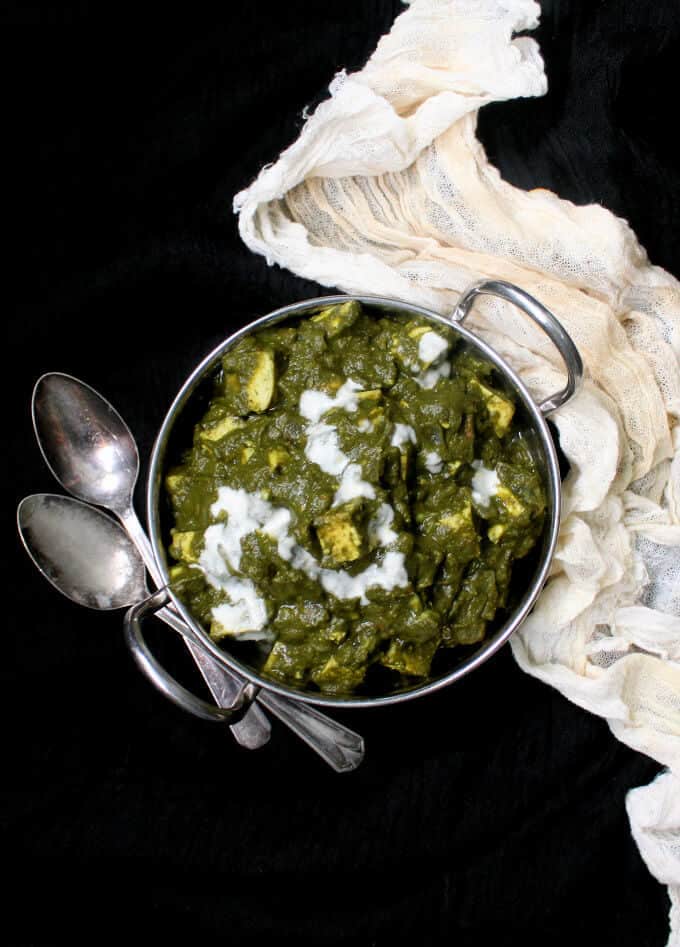 Much has changed in the blogging world since, and you can probably find at least a couple dozen versions of vegan Palak Paneer or Saag Paneer ("saag" being the Hindi word for any leafy vegetable, "palak" is specifically spinach) recipes online. The way I make this recipe myself has changed somewhat over the years, so I wanted to update it for you.

Palak Paneer is by no means a difficult dish to veganize because it is almost vegan -- other than the paneer, that is. In the past, I'd use firm tofu, pressed and then baked, in lieu of the paneer. But now I use superfirm tofu, which works even better as a paneer substitute. Tofu also comes minus the saturated fats and calories of paneer, so it is a better-for-you substitute.

My recipe is also as close as possible to an authentic, traditional Palak Paneer -- other than the tofu and cashew cream to make it vegan. The ingredient list may seem a little long but it is not intimidating, and ingredients like the dry fenugreek leaves, although not an ingredient you'll find in every pantry, add the flavor that you so love when you eat this dish at a restaurant. So it's worth taking the trouble to find and use them. 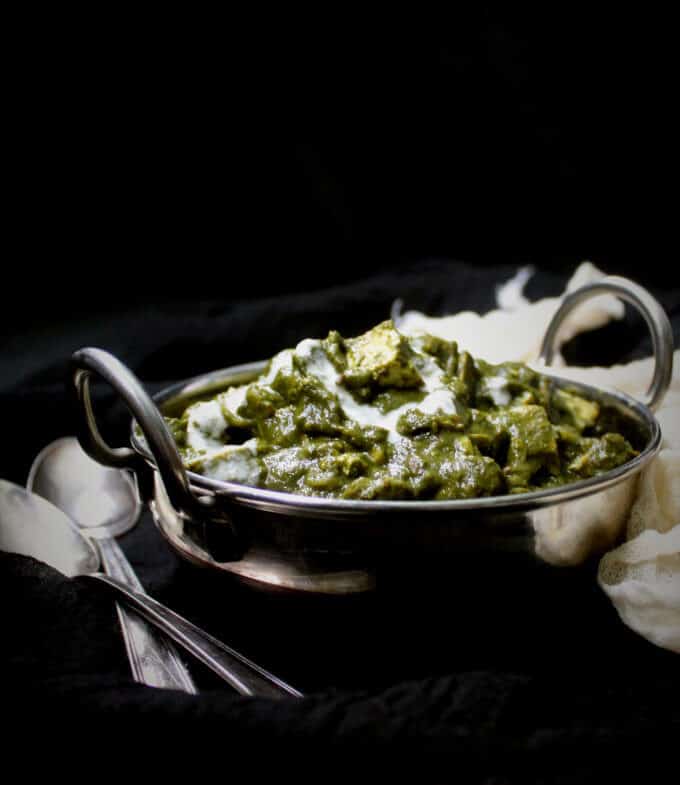 The tofu "paneer" does a great job of absorbing the marinade and the flavors of the spinach. While some people fry the paneer before adding it to the spinach, and some don't, I like to bake or, sometimes, shallow-fry the tofu. I think it improves the flavor even more, and it takes very little time and effort, so why not?

I used to marinate the tofu, as some of you who tried my earlier recipe would remember, but I don't do that anymore. I think the tofu is just as flavorful without that additional step, and why create more work? Paneer is also not typically marinated before use in this recipe, so this brings us closer to the original.

Making this vegan Palak Paneer is extraordinarily easy-- there really is no way you can mess it up, even if you haven't cooked Indian food before. 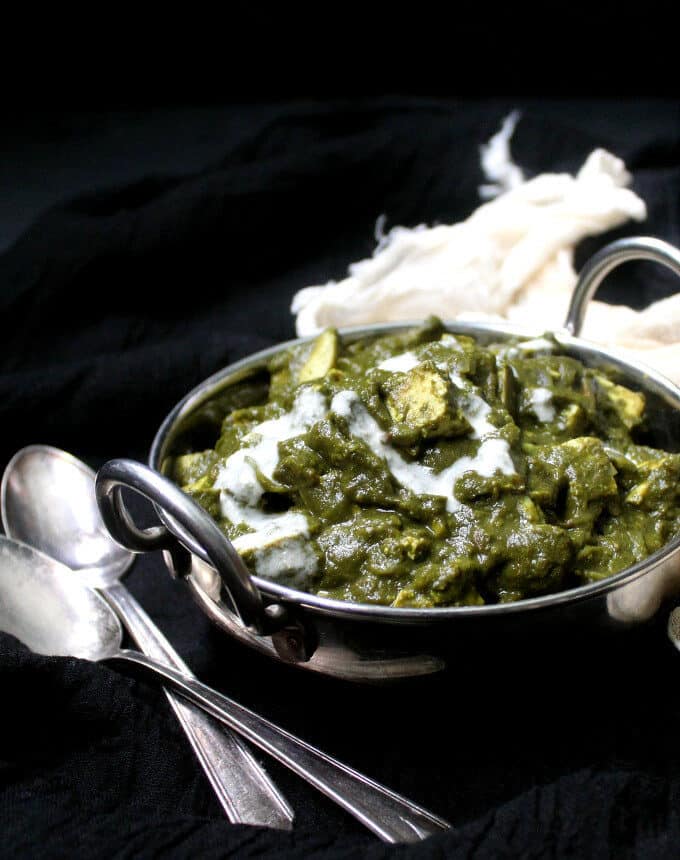 Here are some tips to ensure your vegan Palak Tofu turns out just as perfect as can be. And how you can make it even faster:

-Make sure you saute the onions to the point where they turn golden. You want the onions to melt into the sauce when your dish is done, and leaving them half-cooked at the outset will not give you that silken, rich gravy.

-You don't need to use fresh spinach for this recipe, because frozen works just as well. In fact, I prefer it because I can more easily find frozen organic spinach at the supermarket, than fresh organic spinach.

-You can use extra firm tofu if you can't find superfirm tofu. Make sure you press as much liquid as you can out of it and then bake.

-You will find recipes out there for vegan Palak Paneer with a shorter ingredient list, but if you want a recipe that tastes authentic, take the trouble to find the ingredients and use them. Compromising on the ingredients might give you a decent Palak Paneer, but it won't be amazing, and why would you settle for something decent when you can have something amazing?

-Whatever you do, don't use coconut milk to substitute for the cashew cream in your Palak Paneer. Coconut is not an ingredient commonly used in North Indian kitchens, and coconut adds a strong flavor, even a small amount of it, which detracts completely from the recipe. If you want to go nut-free, leave out the cashew cream. Your dish will still taste great.

-If you don't eat soy for any reason, leave out the tofu cubes and just make the spinach gravy. It tastes great on its own.

-Finally, serve this Palak Paneer with a tandoori roti or naan. Or, if you want to go gluten-free, serve it with some brown rice for a perfect, delicious meal. 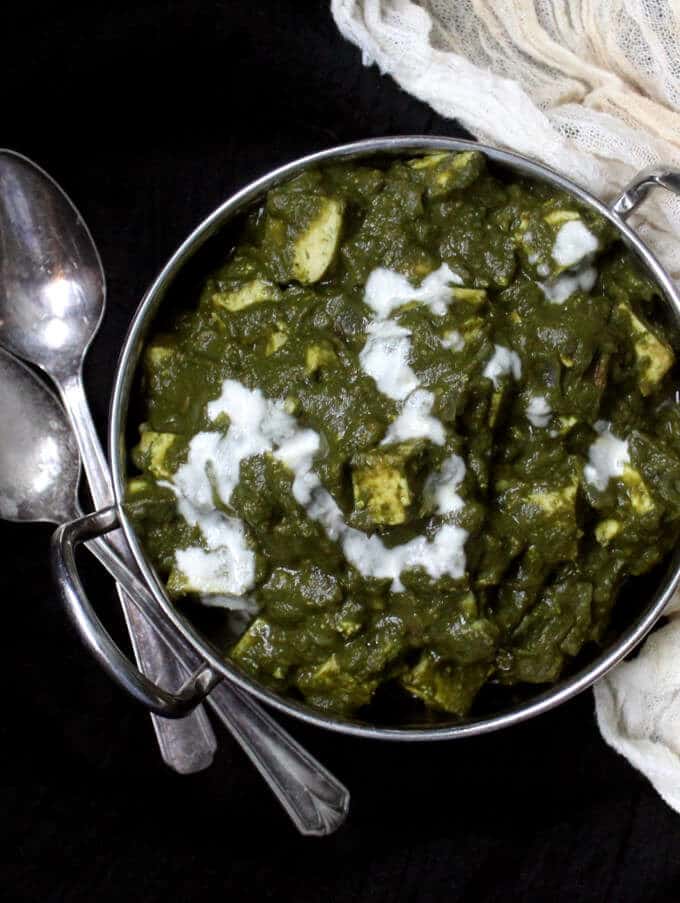 Now go, make it. My Creamy Vegan Palak Paneer is vibrant, delectable, low in fat, and would stand up quite easily to its non-vegan counterpart on any restaurant menu. And what's more, this dish really is good for you. 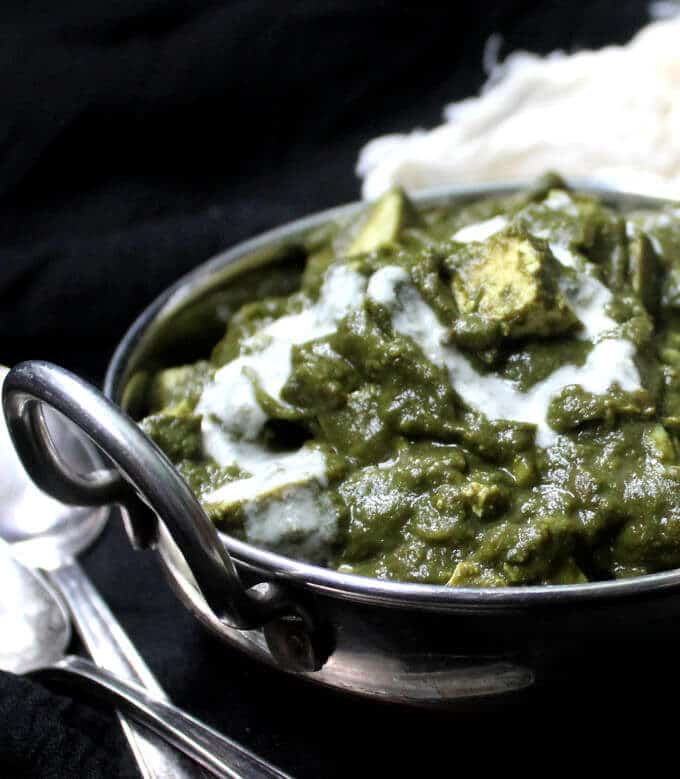 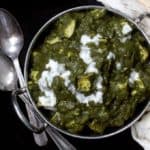