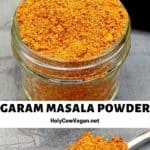 Learn how to make the aromatic Indian spice mix, Garam Masala, for use in curries and dals.

Garam masala is a powdered blend of healthful, warming spices used in north Indian cooking to make tasty curries and vegetable sides. It is intensely aromatic and it can transform even the simplest recipe into the most delicious Indian food you ever ate. But storebought masalas often lack the flavor and fresh aroma of a homemade garam masala spice mix. This easy recipe is better than any mix you can buy and you can make a batch in just 15 minutes. Use it to add mouthwatering flavor to many Indian recipes, including restaurant-style dishes like Vegan Palak Paneer, Aloo Paratha, Vegan Butter Chicken, and Vegan Malai Kofta.

Making your own homemade garam masala powder will not just make you feel like a domestic god, it will make your home smell so fragrant, you might find yourself in constant craving for some great Indian food.

And that's perfect, because there's no end to the delicious recipes you can make with this masala.

Garam masala is perhaps India's best known spice blend globally, although it is by no means the only one. It is mainly used in northern Indian dishes. There are hundreds of other regional spice mixes made and eaten around India, but garam masala's breakout popularity is probably due to the easy availability of north Indian Punjabi food and the dominance of north Indians in the restaurant business worldwide.

Every Indian cook who uses garam masala has his or her own recipe for this blend. This one's uniquely mine. It's the one I always have in my kitchen for the Indian recipes I share with you. I hope you'll try it!

What is garam masala?

Garam masala is an aromatic mix of spices originally intended to warm the body. Garam, in Hindi, means hot, and masala is a spice mix, and this blend originated in India's northern states, which, contrary to stereotypes about Indian weather, tend to get bitterly cold.

A typical garam masala spice mix would include cinnamon, black cardamom, cloves, cinnamon and peppercorns, all considered warming spices. For modern, all-weather use, most garam masala recipes now balance things out by mixing in cooling spices, like fennel, green cardamom and coriander seed.

"Garam masala" is commonly understood to mean the powdered spice blend. Keep in mind that in some recipes it can refer to a mix of whole spices as well ("whole garam masala"). Both will have very different flavor effects on your recipe. Indian cooks often distinguish between the two by calling the powdered blend "garam masala powder."

In addition to being really delicious, spices, such as those in garam masala, carry immense health benefits and can keep your doshas in balance as the seasons change. Make a batch today!

Spices are full of antioxidants and antiinflammatories--they are not just tasty, they are great for you. Ayurveda, the ancient Indian system of healing, has long used spices as medicine. They help balance the body's three doshas--vata, pitta and kapha.

How to make garam masala (step by step)

Blend and store the spices:

Where can I buy whole spices for garam masala?

You can whole spices at the Indian grocery store and online via Amazon. The Indian grocery store has better prices and you'll find everything under one roof. But if you want organic versions you're more likely to find them online. Whole spices can last up to three or four years. Store them in containers that are airtight in a cool, dry environment.

How long can I keep the homemade garam masala?

Some online sources say powdered spices last 2-4 years but it is safest to use them up within a year.

How should I store garam masala?

Store homemade garam masala or any powdered spice in an airtight jar, in a cool, dark, dry place. If you have room in the refrigerator, your spices are safest in there.

The "garam" or "hot" in garam masala doesn't refer to how hot the spices are; they refer to the fact that this is a spice blend intended to warm the body. You can tweak the heat in the garam masala by adjusting the number of red chili peppers up or down.

What is the difference between curry powder and garam masala?

Garam masala evolved as a north Indian spice blend, while curry powder was created by Indian cooks for British palates, as an all-purpose spice mix, during the colonial era. The two are quite distinct although they do have some common ingredients. A curry powder borrows elements from sambar powder, a spice blend used in south India, like lentils and fenugreek. Curry powder also contains turmeric--an ingredient that's not typically added to garam masala.
The flavor profiles of garam masala and curry powder are quite different and they are not interchangeable--at least not in traditional dishes. But you can sometimes substitute one for the other in modern spin-off versions of Indian recipes like my easy vegetable curry.

When should I add garam masala to a dish?

Garam masala is usually added to finish off a dish. There are some exceptions but if your recipe doesn't specify an exact time it is safe to assume that you should add the garam masala at the tail end and just before you turn the heat off. Garam masala spices are already toasted so it doesn't need to cook again with the rest of the recipe.

More recipes to use garam masala in: 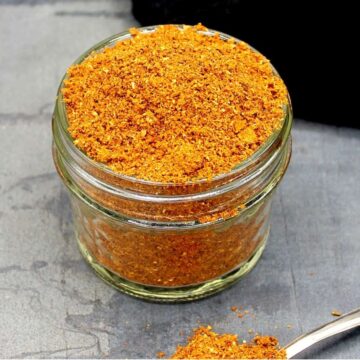