A kulcha is often overshadowed on Indian restaurant menus by its more popular cousin, the naan. But with its flaky, soft texture this flatbread is just as capable of holding its own and even shining brighter. Try this version of a stuffed Aloo Kulcha, with an easy, savory potato filling. And for those of you who have a sourdough starter bubbling away, I have directions for making this with sourdough discard, which makes it healthier and even more delicious. A vegan, soy-free and nut-free recipe.

Among the many Indian flatbreads you may or may not be familiar with is the kulcha, which looks something like a round naan, only with greater complexity.

This Aloo Kulcha, with a potato filling, is one of my favorite Indian breads to make, and it is so good, it'll likely become yours too if you try it.

A kulcha has a slightly flaky yet soft texture and although you can make it plain, it's even better with a stuffing of potatoes not unlike that you'd find in an aloo paratha.

If you have a pot of sourdough starter, and hate throwing away the discard, this is a recipe you should be trying. You can use as little or as much of the discard as you want to -- I added three-fourths of a cup, but you could use as much as 1 cup or as little as half, depending on how much you are discarding or want to use up.

Or, if you don't have sourdough discard, you could just use baking powder as the leavening.

This is an easy recipe, but it does involve a few steps--making the dough, making the stuffing, and then putting it all together before cooking the kulcha. And if you're making it with sourdough you need to plan a little ahead--not a lot, but a little. That's because when you're using sourdough, you want to harness its benefits, which means giving the dough some time to stand and let the good bacteria break down the starches in your dough. You don't need too long, two or three hours is good.

You could just add the sourdough and proceed after a few minutes, but then you'd not get that benefit, see? If you're in a hurry, just use some baking powder.

This is an eminently kid-friendly recipe--flour and potatoes, what's not to like? You can vary some of the spices in the stuffing if you have picky kids who won't eat this or that--cilantro, for instance, although Jay loves it.

How to make the best aloo kulcha:

What do I serve with the Aloo Kulcha?

Chole or chana masala is the perfect accompaniment for a kulcha. But any spicy lentil or bean curry would work just as well. Try this with a Rajma, a kidney bean curry, or vegan Dal Makhani.

You can also serve the kulcha and it'd be perfect with a north Indian veggie curry, like this vegan Palak Paneer with Tofu or this Vegan Paneer Butter Masala. A vegan Butter Chicken would make this an elegant and divine meal.

Serve a vegan cucumber raita on the side for the perfect meal. 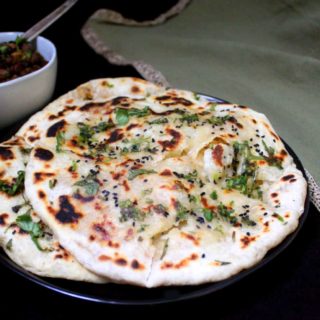 For the kulcha dough:

For the potato stuffing:

For brushing on at the end: