Naan is perhaps one of the most popular Indian flatbreads on any restaurant menu, for good reason. This soft, fluffy flatbread, typically baked in a clay oven called a tandoor, is not only smoky and uniquely delicious, but it makes for divine eats when dunked into spicy Indian stews and curries. Naan recipes usually include milk or yogurt to create a softer, fluffier bread, but making a vegan naan that's just as delicious without the dairy is very possible. Here I will show you how to make the perfect vegan naan that will rival any naan you ever ate at the finest Indian restaurant.

A soft, fluffy, pillowy naan is everyone's favorite Indian flatbread. And a surefire testament to its popularity is the fact that in recent years, it's become a common offering at grocery stores like Aldi's and Trader Joe's, rubbing shoulders with other favorite global flatbreads like pitas and tortillas.

Jay loves it so much that every time we are at the store, he'll beg me to buy some so once we get home, we can pop it into the oven to warm it up, then tear it with our fingers and dunk it into a spicy hot curry for a delicious weekend lunch.

But easy as it is to buy a naan, or eat one at a restaurant, it's not that much harder to make one yourself, in your own kitchen. So on days when I am not madly rushed, I'll stop Jay right before he tosses a packet of naan into the grocery cart. Instead, when we get home, I'll roll up my sleeves and make some vegan naan bread myself (I even have a whole wheat naan recipe on the blog and a vegan gluten-free naan in case you're gf--check it out!). And to make it even more special, I'll brush on an herby vegan garlic butter.

A homemade naan not only tastes better, because it doesn't have all those preservatives that store-bought bread does, it also has a better texture, and it's, of course, better for you. Especially when it's vegan and therefore free of artery-clogging butter and ghee. Once you've made it, you might find it hard to go back.

Making a naan bread, including vegan naan bread, is super simple too, and it really doesn't need any fancy equipment. All you need is your hands. And while you'll hear a great deal of talk about how naan made in a traditional clay tandoor oven needs temperatures as high as 800 degrees to cook -- a range a humble home oven cannot achieve -- don't lose heart. This naan recipe I am about to share with you today is made on a screaming-hot griddle on the stovetop, and it's faster than any oven with results just as good as anything you'd get from the restaurant or store. Or better.

This recipe rocks! Super easy, forgiving recipe...it turned out perfectly. My wife was ecstatic and I look forward to making this for years to come.
Julie

For the vegan garlic butter topping:

How to shape a naan

What do you serve with the vegan naan?

Naan is best eaten by tearing off pieces of the soft, hot bread and dunking it a hot, spicy curry. Because a Naan is a north Indian bread, it will go well with just about any north Indian curry. Here are some ideas for saucy, Indian dishes and curries to serve with naan: 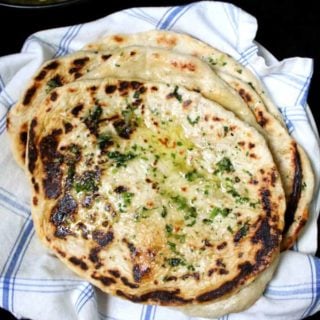 For the garlic butter topping: