Jump to Recipe Pin Recipe
Learn how to make the best vegan and gluten-free naan bread to dunk into your favorite vegan Indian curries and sauces. You can make this with or without yeast. Soy-free, nut-free recipe.

A reader asked me for a gluten-free version of my easy vegan grilled naan when I posted it last month. So I've been trying to come up with a recipe that is as close as possible to the real thing, and today, I have for you the best vegan gluten free naan. It's a keeper.

This naan is super simple to make, and if you follow instructions you could be eating naan this afternoon for lunch. All you will need is some pantry ingredients you likely already have around if you're used to gluten-free baking. Let's get started.

What gluten-free flour works best for the gf naan?

I wanted the flavors to be very much like those in a regular naan, so I chose to use just plain gluten-free all purpose flour. The one I have in my pantry is King Arthur Measure for Measure. To help bind the dough and make it easier to work with I also used a couple of tablespoons of tapioca starch.

Can I make the gluten-free naan without yeast?

You can make this naan with yeast or you can make it yeast free. I think the yeasted version tastes and feels more like an authentic naan, so I strongly recommend it. You do need to give the yeasted dough about an hour and a half to rise. So if you're in a rush you can make this without yeast and instead use baking powder and baking soda for the leavening.

To make the gluten free naan without yeast, mix 1 teaspoon baking powder and ½ teaspoon baking soda with the flours while making the dough. Let the dough rest for 15 minutes, then proceed with rolling and baking the naan.

Picture this: you've followed instructions perfectly. You've waited patiently for your dough to rise, made those little balls of dough, placed one within cling wrap, and rolled it into the greatest looking little naan. You've even got the griddle to the perfect temperature, screaming hot and just begging to go to work making those delectable black and brown spots on your naan.

Confident, you bravely pick the gluten free naan with your fingers to transfer it to the griddle. Next thing, to your utter horror, it drops limply out of your fingers in pieces.

Ugh. What did you do wrong, you fret, ready to throw the towel in and the rest of that annoying dough out.

But wait. You've just learned the most valuable lesson in gluten-free flatbread making, one that will serve you well as long as you continue to bake with gf flours: your flatbread fell apart because, unlike a wheat one, it does not have the benefit of a structural net, ie the gluten, holding it all nicely together. So what do you do?

Gluten-free bakers usually get over this conundrum by using eggs. Eggs add structure and help the dough bind, but as you know, that's not an option here.

Instead, for our vegan version, we use starch. While starch is by no means as great a structure-builder as gluten, it will help your dough hold together a bit better. The rest of it is down to perfecting your technique.

Your gluten free naan, for one, needs to be smaller than you would make a regular naan. I shape mine to be about six by four inches and about a quarter of an inch thick. You can even make them smaller. The dough rolls easily so don't be tempted to make a big naan. Remember that bit where the naan fell to pieces? Yep.

Once your naan is on the griddle it will set up and no more worries about tearing!

Make sure you roll your gf naan within the folds of cling wrap or parchment paper (I find cling wrap easier to work with). You don't have to flour the cling wrap, but if you find it easier to roll on a floured surface, flour it lightly. This will also make transfering the naan to the griddle easier.

Adding some xanthan gum will make your dough a little easier to work with. The flour I used already had some added to it, and I didn't add more, but if you're new to this you could add up to two teaspoons. Knead it in with the other flours.

Gluten-free flours tend to be thirsty and dry out easily. To make sure your naan doesn't dry out, brush some water on the surface of the naan after placing it on the griddle.

Brush on vegan butter or EVOO on the naan as soon as it comes off the griddle for best flavor. My favorite is this herb-garlic mixture I shared in my original recipe for an authentic Indian naan, this garlic vegan naan. You can find a similar garlic cilantro butter in this whole wheat vegan naan recipe.

What to serve with vegan gluten free naan 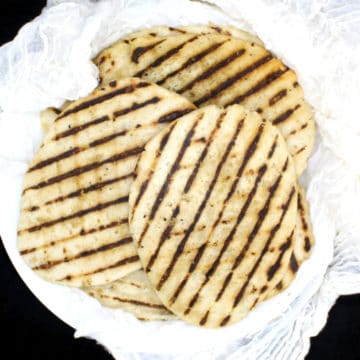