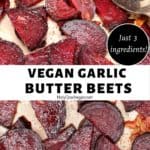 A three-ingredient, utterly simple recipe for garlic butter beets that showcases the deliciousness of these healthful veggies.

If you aren't a fan of beets, here's a recipe that will make you one. And it's so simple, you can make it even if you've never cooked a beet before.

For this Vegan Garlic Butter Beets recipe, I roasted the beets until they were tender, then I sliced them, skin and all, and tossed them with an extraordinarily simple but also extraordinarily flavorful sauce of vegan butter and garlic.

Salt and pepper go in, of course, to season the beets and you're all done. It's simple, easy and absolutely effective at turning veggie haters into veggie lovers.

This is a question I used to get so often from Jay, in fact each time he saw me buy these veggies at the market, so let me address that here for anyone who still feels squeamish about these rather odd-looking veggies which cook up so gorgeous--sort of like the ugly ducklings of the vegetable world.

Beets are one of the most nutritious veggies you can eat, packed as they are with vitamins, fiber, potassium and iron. When my brother and I were children, our father would get us to eat beets by telling us that the red beets made our blood redder. While that was a simple and fun way of explaining the nutritive value of beets to kids, the fact is that the high levels of folate and iron in beet are indeed highly beneficial for haemoglobin--the protein molecule in your red blood cells that carries oxygen from your lungs to different parts of your body.

Beets are not just nutrition superstars though. They are also delicious, with a sweet, deep, earthy flavor that combines well with garlic, lemon and herbs like thyme and rosemary.

People often just eat the roots, but beet greens are just as delicious and nutritious. And they cook fast, like chard or spinach. You can toss them into dals and stews. Indian cooks chop up beet greens and saute them with onions and garlic and green chili peppers into a tasty sabzi or side dish that goes really well with dal. So the next time, do not toss those greens.

How to cook beets

It is natural to look at a beet, bulbous, covered with dirt and, on top of it all, sporting that hairy tail, and wonder what on earth to do with it.

But cooking beets couldn't be easier.

The simplest thing to do with them is to roast them whole. Just place the washed beets, skin intact but tops and bottoms trimmed, on a baking sheet and place them in a 400 degree oven for 40 to 50 minutes or until a knife inserted in the center goes cleanly through. Alternatively you can cover them with water, bring it to a boil, cover and let the beets simmer 35-45 minutes or until they are tender.

Slice them, you don't even need to peel the skins if the beets are organic, and toss them with a bit of olive oil, garlic and salt for a simple side with a Mediterranean flair.

Or grate them raw in a food processor and saute them in a bit of oil to which you've added mustard seeds, slit green chili peppers and a few crushed pods of garlic. They'll cook up tender and delicious in no time at all.

Or chop them when they are raw and roast them, as I do, in this recipe for roasted golden beets with rosemary and garlic. The recipe works just as well with golden beets.

You can even make a beet salad or a beet pesto.

How to make garlic butter beets

This recipe is so darn simple, it is barely a recipe. But here we go. 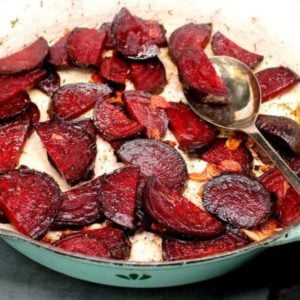