A simple recipe for healthful and delicious turmeric roasted root vegetables. Dip these into a cheesy cashew dipping sauce for a blast of flavor.

This is my kind of food. Delicious, colorful veggies, cut into chunky wedges, roasted in the oven until golden brown and crisp, and served piping hot alongside a veggie burger. Or by itself, because this kind of beauty really needs no complement.

I wanted to come up with the simplest recipe that would not just be tasty, but would make all those amazing flavors sparkle and soar.

In the end, the recipe was a bit of a no-brainer. This is what I often do to potatoes when I want some roasted spuds in a hurry, and I was pretty sure the treatment would work just as well on the other root veggies.

So I chopped up my veggies into rather large wedges, tossed them with a smidge of oil, turmeric, salt and ground black pepper, and let them hang out in a piping hot oven for 40 minutes. That's the recipe, all, promise, it's all I did. In return, I had two baking sheets of unbridled deliciousness.

Root vegetables lend themselves beautifully to roasting. Their natural sweetness concentrates and helps caramelize the vegetables, making them crisp and golden. They are especially mindboggling dipped into a cheesy cashew sauce that I will share with you in my next post. 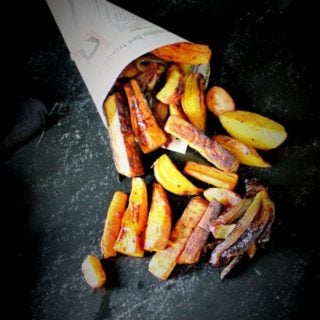 Tried this recipe?I'd love to see! Tag me on Instagram @holycowvegan and be sure to hashtag it #holycowvegan.
« Orange Almond Breakfast Loaf
Magic Cheesy Sauce for dipping, dressing, and more »
369 shares