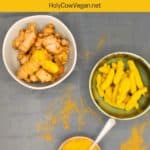 Turmeric is a wonder spice, with deep roots in Indian cuisine and a growing fandom worldwide. But as clear cut as its healthfulness is, cooking with turmeric can be tricky. Learn why you should incorporate this orange-gold spice in your cooking, the different kinds of turmeric available, which kind to use for what, and -- importantly -- how much to use at a time. Also included are delicious recipes you can make with turmeric.

Indian cooks are incredibly resourceful when it comes to substituting ingredients, but I don't think I ever met one who would dare cook a meal without mirchi (red chili pepper powder) and haldi (turmeric) on hand. One adds color and health to Indian food and the other adds fire and flavor. Both are indispensable.

I've been wanting to write a post on cooking with turmeric (curcuma longa) because its healthful properties make it an incredibly valuable addition to any diet. But there are also so many misconceptions, and misinstructions, online about why and where to use it, how much to add into recipes, the right way to cook it, which form of turmeric to use, and so on.

This post, I hope, will help answer some of those questions for you as you explore this wonderful spice in your culinary journey.

Powdered turmeric: The most familiar form of turmeric is the powdered spice. It typically sits in the center of an Indian spice box, deservedly so as the "king of spices." This is the kind most people, in and outside India, cook with. My mom always cooked with the powder, and it's what I use most frequently in curries and sabzis and to make golden milk. It can play a starring role even in desserts like this yummy vegan turmeric cake.

Dry turmeric root: This is the entire rhizome that's dried and can be stored in a jar, without refrigeration. Its main use is not in cooking but in religious rites and rituals and, sometimes, in face or body masks. Some Indians use the paste in kolams or rangolis, decorative patterns that are traced on the floor outside the front door to ward off evil and illness. In the United States, you would find the dry root at an Indian store. You can powder it and use it in cooking, but that's unnecessary given the easy availability of turmeric powder.

Turmeric leaves: These are probably not familiar to most people here in the United States, but the long, narrow leaves that sprout from the rhizome also have great antioxidant properties. My mom would steam rice, coconut and jaggery dumplings called "patholi" within the leaves and while you didn't actually eat the leaves, they would impart an exquisite flavor and fragrance to this sweet.

Fresh turmeric root: This is the fresh, tender root that, on the outside, looks a little bit like a skinny ginger rhizome with orange undertones. In the United States you can easily find fresh turmeric root in health food stores and chains like Whole Foods and sometimes even in supermarkets. Here people toss it into smoothies. But in parts of India that endure bitter winters, turmeric root, with its warming properties, is treated as an ingredient rather than a spice.

White turmeric: This is a lesser known relative of the yellow version, although it appears to be gaining some popularity and recognition in the west in recent months. In India, white turmeric (curcuma zedoaria) is not as conspicuous in cooking as the yellow kind, but it has, for long, been a popular ingredient for making pickles. It has a distinctive, mango-like flavor and an outer appearance that more closely resembles ginger, which is probably why it's called aam haldi or amba haldi (mango turmeric) in the north and west of india and manga inji (mango ginger) in the south.

Studies show that white turmeric, like yellow, has many beneficial anti-inflammatory and antimicrobial health effects, and can help fight illnesses ranging from arthritis to stomach ailments and cancer. You can find both fresh and powdered versions online. If you add it to your diet, be sure to use it in moderation, as with turmeric, and consult with your doctor for any possible side effects.

What kind to use in cooking

I like to follow the same rule of thumb cooks in India do--use the turmeric powder when you're using it as a spice, and fresh turmeric root when you are using it as an ingredient.

Turmeric, or more specifically the compound curcumin in it, is a potent antioxidant with many proven and positive health effects. Research shows it could potentially help with:

If you have any of these conditions, however, don't just start adding large quantities of turmeric to your diet or pop turmeric pills--consult your doctor first. Like all spices, turmeric is potent, and it can have negative side effects, especially if consumed in excess. These range from nausea and upset stomach to an increased risk for kidney stones.

The safest way to consume turmeric is to just add it to your food. If you use no more than a quarter to a half a teaspoon in a recipe that has four to six servings, you will get the benefits of this spice without potentially hurting yourself.

How much turmeric to use in recipes

Turmeric is, in many ways, a spice unlike any other, because its main function in food is not to flavor but to add healthfulness and, secondarily, color. If you want your culinary love affair with turmeric to survive and thrive, remember that a little goes a long way.

That's because turmeric is extremely bitter, with an astringent taste and while a tiny bit will merge and disappear into the food, leaving only that appetizing color and healthfulness behind, too much will overwhelm and even spoil your dish, making it virtually inedible.

Every Indian learns this lesson early on, as I did, when my Goan stepmom bought fish from the market each Wednesday and prepped it for cooking. My job, as soon as she had finished cleaning the fish, was to add turmeric, chili pepper powder and salt that she would then rub into the fish for a first marinade. What I learned from her, and still remains firmly implanted in my brain, is that I could be heavy handed with the chili, but never with the turmeric. A quarter, or at best half, a teaspoon was more than enough. Later, as a cook, that lesson was reinforced the first time I made a recipe that called for turmeric and added a teaspoon instead of half. It was a memorable meal for all the wrong reasons.

How to cook turmeric for the best flavor--and health

When adding turmeric, fresh or powdered, to a recipe, allow it to "bloom" in a bit of oil. This takes the edge and astringency away. You do this by putting the turmeric into the pot and sauteing it with other ingredients before you add a large amount of moisture in. I would typically add it just after the "tadka" or tempering of mustard or cumin seed or whole spices, or when I am sauteing onions.

To enhance the effects of turmeric when you cook with it, add some black pepper into the recipe. Piperine, a compound in the pepper, helps the body better absorb curcumin, the beneficial compound in turmeric. Blooming the turmeric in oil has the same effect.

Turmeric should not be consumed raw (unless it's in a smoothie) because it simply won't taste so great, and, like I said, cooking it with oil and pepper enhances its benefits. To reap its full benefits in a smoothie, add a couple of black peppercorns into your blender.

How to substitute turmeric root for turmeric powder

Because it's less concentrated, the flavor or turmeric root is also far more pleasant than that of turmeric powder. It is a bit grassy and mildly bitter, and it reminds me a bit of carrots, only warmer. But it's also a strong flavor, so you can't add it to a recipe the way you would carrots.

When cooked, turmeric root has a distinct, extremely appetizing fragrance that you won't get from the powder.

When substituting turmeric root for the powder in recipes like curries or rice dishes, grate it or chop it into small bits. As with the powdered spice, saute it in oil before adding other ingredients.

More ideas for adding turmeric to your diet

More questions? Ask away. Or leave your own tips in the comments below. And before I wrap up, can I just say this? It is a pet peeve, and it bears repeating in this post dedicated to turmeric: it's pronounced turmeric, guys, not tumeric! There are two "r's" in it and the first four letters are pronounced just like "term". Not so hard, right?

Now let's toast that with a delicious turmeric tea. 😉