Taking the dairy out of this vegan Paneer Butter Masala, a Punjabi classic, does not take away from its mindblowing flavor or its authenticity or its deliciousness. Give this gluten-free recipe a try and you'll be hooked for good.

If you love Indian restaurant-style dishes that are deliciously flavored yet not too spicy, you should put my vegan Paneer Butter Masala on your list of recipes to try.

Paneer Butter Masala is a popular dish often served at dhabas, makeshift, salt-of-the-earth eateries that are a common sight along north India's highways.

Dhabas originated as food and rest stops for tired truckers hauling cargo up and down the dust-smothered roadways and the food, meant to satisfy their lusty appetites hungry for the flavors of home, was hearty, rustic, spicy, and inordinately tasty.

Because Punjab, billed in Indian textbooks as the land of milk and honey, is also a prolific producer of dairy, the offerings at dhabas were more likely than not to be drenched in some milk product or other, including butter, ghee, cream and buttermilk..

Most Indian restaurants here in the United States and in other parts of the globe tend to lean rather heavily on north Indian cuisine of the kind you'd find in a dhaba, and you are likely familiar with many of these foods. For instance, if you've had a lassi or a Palak Paneer or a Dal Makhani, you've eaten dhaba food.

A favorite dhaba -- or restaurant -- offering is Paneer Butter Masala. The name of this dish leaves little to the imagination, and it really is what it claims to be: cubes of paneer, an Indian cottage cheese, in a sauce of spices (or masalas) with butter adding creaminess and richness.

As you can imagine, it's quite vegetarian friendly, but all that cheese and cream and butter makes it a no-no for a vegan.

Cut to the modern vegan kitchen, where paneer and butter and cream are easily substituted, meaning this dish has to cut out nothing but the unwelcome cholesterol.

My vegan Paneer Butter Masala is a dish to fall in love with. The cubes of tofu are perfectly coated by a flavorful, creamy, visually appetizing orange-red cashew sauce. Scoop it up with pieces of naan or roti or mix into some white or brown rice for a delicious food experience right in your own home.

What you'd also likely appreciate is how easy this dish is to make. And no matter when you make it, or for whom, it's sure to disappear within minutes of serving.

Ingredients for the tofu paneer masala: 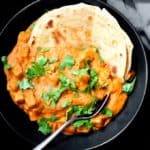 Taking the dairy out of this vegan Paneer Butter Masala, a Punjabi classic, does not take away from its mindblowing flavor or its authenticity or its deliciousness. Give this gluten-free recipe a try and you'll be hooked for good.