You just have to be a kid at heart to enjoy this vegan White Chocolate Pie. It's part pie, part candy, part ice cream, part cheesecake, and fully dreamy. A gluten-free shortbread crust cradles a filling of white-chocolate silk, and on top goes an easy but yummy raspberry drizzle.

I love white chocolate -- unabashedly and unapologetically -- and if you do too, I have the perfect dessert for you today: my vegan White Chocolate Pie with a raspberry drizzle.

White chocolate is one of the handful of things I hated giving up when I became vegan, and although you can buy white chocolate chips that are vegan online, it's never really been quite the same. Until I learned to start baking with cocoa butter.

I buy cocoa butter mainly for skincare products that I make at home (and love! White chocolate vanilla body butter, anyone?). But since the kind I buy is also organic and edible, I have been increasingly using it in my baking. It's been quite a revelation.

Cocoa butter (also called cacao butter) has an addictive chocolate aroma, but it really doesn't have a strong chocolate flavor. And since it's the stuff that white chocolate is made of anyway (usually with milk added in the storebought versions), it lends itself perfectly for use as white chocolate in vegan baking.

How to make the perfect white chocolate pie crust:

How to make the silky pie filling: 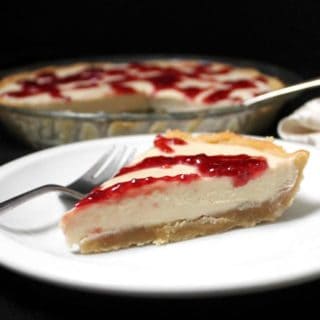 For the shortbread crust:

For the white chocolate filling:

For the optional raspberry drizzle: