A fluffy, decadent Vegan White Chocolate Raspberry Cake with Buttercream Frosting is exactly what you need to treat yourself and your loved ones to this Valentine's Day--or anytime. It's way easier to make than you'd imagine, and it'll definitely make everyone who eats it fall in love with you. 😉

I have a Valentine for you, and he's so delicious you won't be able to stop gorging on him.

Get your mind out of the gutter! I am talking about this absolutely scrumptious Vegan White Chocolate Raspberry Cake, which, frankly, is just as good. Or maybe better.

This cake has been a labor of love for me. I've made it so many times in the past few weeks that Desi and Jay are stuffed with more cake than they could've dreamed of. And yet it's so good, they are not complaining. Not yet.

The reason I made it so many times is because I was trying to get this cake just right for you. It all started when Desi and Jay brought home a White Chocolate Raspberry Cake from a Nothing Bundt Cakes store that opened in our neighborhood a couple of years back. Their cakes aren't vegan and usually I'm not tempted, but the idea of white chocolate and raspberry--two of my favorite dessert flavors--was annoyingly tantalizing.

And then, to top it all, they ate it and they ranted and they raved, so I snuck a small, guilty taste, and god. Was it good.

So I set about trying out a vegan version of it, as I do with everything I love and can't eat anymore, because why should we vegans not have fun?

The first time I made it, I used fresh raspberries, and the cake was quite amazing. It was fluffy and tender, and exactly where I wanted it to be except that the raspberries discolored during baking and looked bluish-gray rather than a bright red. Not a biggie, the cake still tasted amazing, and I did find a solution for that, as you can tell from the pictures.

But the frosting--that was another story.

I tried the frosting recipe out with different proportions of cocoa butter, I tried beating it in early, folding it in at the end, and everything in between, but no luck.

So in the end, I decided that I'd stick with white chocolate and raspberry in the cake but go with raspberry and vanilla in the frosting, which results in a win-win. If you do decide to add cocoa butter though, I've learned a trick you can use, and I'll add it to the tips and tricks section below.

The cake is amazing, with lots of raspberry and white chocolate flavor, and the frosting is fluffy, creamy and decadent. It's not even a difficult cake to make, and pulling it together takes a maximum of 30 minutes, promise. Even better: I got tons of compliments from my two tasters, both proclaiming it was better than the original. They may be a bit biased, but I'll take it!

Now that you're armed with all that white-chocolate-raspberry-cake-making-knowledge, let's get down to brass tacks.

I may be a little late for your Valentine plans, but I didn't want to share a recipe with you that didn't meet my standards. This one definitely does. I hope you'll try it, for yourself and for the ones you love. 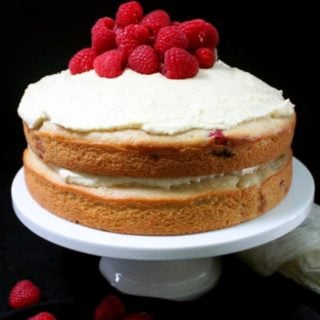 For the buttercream frosting