Stir up something frightfully delicious for the kids this Halloween, like this easy vegan Blood and Brains White Chocolate Bark oozing with raspberry plasma and smashed walnut brains. A gluten-free, soy-free recipe, can be nut-free.

Halloween is the day Jay most looks forward to each year. And with not many trick-or-treatin' years left ahead for my favorite preteen, 2020 has been a colossal downer.

So I've been thinking up some Halloween treats to put a smile on his face, like this Blood and Brains White Chocolate Bark.

Jay loves white chocolate, as do I, and it's such a great flavor with raspberry, which makes this bark a total winner at our home. But first, have you a favorite ghost story to share?

I'll start. With a little one my dad told us all the time on dark, dreary nights, when the thunder and rain hammered away at the windows and the large, oval leaves of the banyan tree outside with its big, stringy, tentacle-like roots, cast eerie shadows all around us.

It was about this woman with no face, dressed in a white sari (the dress of choice for Indian woman ghosts). She'd wander around the streets of his childhood town, always at night. Her favorite victims were cooks, because she loved to eat (despite the crucial fact that she lacked a mouth, but go figure).

If you found yourself cooking up something delicious at night, you could be dead certain she'd pay you a visit.

Her faceless face would pop up right outside the window, shrouded in white, when you were least expecting it. Her long, bony hand would come snaking up to your nose, followed with a singsong plea, "Can I have some?"

If you were too scared to oblige, it'd be your blood and brains on the menu.

Okay, it sent a chill down my spine just to write that gory little tale. Like so many people, I am a sucker for a good ghost story. And Jay has shaped up into one too. He'll watch creepy movies and then stay up at night, too afraid to sleep, despite all the yelling and forbidding I do.

But Halloween is a good time to put those worries aside, because this is the time of year when ghosts and ghouls become fun, and ghost stories are pretty much de rigueur. So if you have a good one--a real one or a made-up one--be sure to share it in the comments so we can all scare ourselves out of our skins as we munch on this delicious vegan white chocolate bark.

Why we love this vegan white chocolate bark

Tips for making the bark

How to store the white chocolate bark 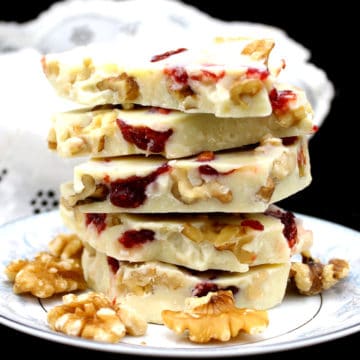